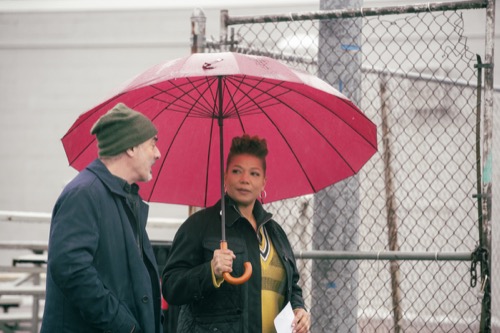 The Equalizer airs tonight on CBS with an all-new Sunday, March 28, 2021, season 1 episode 5 called “The Milk Run,” and we have your The Equalizer recap below. On tonight’s The Equalizer episode as per the CW synopsis, “When McCall tries to locate a missing British mathematician, she finds herself embroiled in an international flight for a revolutionary financial technology.”

In tonight’s episode of The Equalizer, Robyn agreed to freelance for the CIA. She made this agreement because she firmly believes that she would be continuing important work and it also bought her some goodwill. The CIA was now willing to look the other way when it comes to her other work. She can be the Equalizer in her neighborhood and she could carry out the occasional job for the CIA. The CIA now needed something from her.

They needed her to carry out a lost and found detail on Dorian Endicott. He was a British doctoral candidate who overstayed his visa. He also has family that is well-connected back in the UK and they pulled some strings with MI6 who then, in turn, called the CIA. Dorian needed to be found.

Dorian had to be found before he could embarrass his family. They didn’t want it to publicly know that he was thrown out of the country and they wanted to find him before he could drink himself into a coma. Dorian was known for drinking too much. He was supposed to be working on a financial app and he instead used research grant money on the expensive alcohol he could find. Dorian was also about to be suspended from his job at the college.

They didn’t want him teaching anymore. He was known to show up drunk and to pass out in class. He was also just a horrible professor. He never taught his students anything and he would tell them that they were going to earn a minimum wage because they didn’t understand a mathematical problem he didn’t explain.

Dorian was pretty much by everyone he met in the United States. He didn’t have any friends and so Robyn found it odd that someone would send orchids. She found the flower arrangement in his abandoned office. She found who delivered it and she traced the orchids back to an underground bar.

Robyn later found Dorian being a drunken pest at the bar. She was escorting him outside when someone began firing at her and Dorian ran off in the chaos. Robyn thought the shooting was connected to her, but later evidence showed that the shooter was purposely missing Dorian and that can only be because they wanted to take him alive. Robyn had needed answers about why that was.

Robyn asked her old friend Bishop to look into it. Bishop went to the Director of the CIA and he found out that Dorian was important. Director Nash wouldn’t explain why. Only she was willing to wipe away Robyn’s debt if Robyn managed to bring him in safely and so this would in effect end her freelancing. Robyn doesn’t want to be in the CIA. She retired and they didn’t want to let her go and that’s when she agreed to freelance for them.

She thought it would be a great compromise and it was until this thing with Dorian. Dorian was important enough to change the game for Robyn. She would be free and so it was important that she find him before his enemies do. Robyn had Harry look into it for her.

Harry learned that the shooters were Triad. Robyn didn’t know why the Triad would want with a professor and, luckily for her, she has contacts in the Chinese community. Robyn asked her friend why the Triads were after Dorian. It turns out the Triads had been hired by the Chinese government and they were the ones that wanted Dorian. Robyn’s contact didn’t know why. She just knew it was important and so she once again traced Dorian.

She found him in a parking lot. He was meeting with Russian agents at the time and Robyn was forced to kill one of them in order to grab Dorian. Robyn took him captive. She demanded to know what was going on and he told her that he had been defrauding the Russians. He sold them software that doesn’t work.

Harry created an easy-to-use program that any government in the world covet. The Russians wanted it and so Harry sold them the fake program to get his hands on the money he needed. He was paid fifty million dollars. He thought he could use the money to hide from his enemies when really all he did was make more enemies. The Russians were now hunting him alongside the Chinese. The Americans also wanted a word with him and so Robyn demanded to see this program.

Dorian told her that the program was at his place in Brighton Beach. They made it there. Just not before they ran into Robyn’s daughter and Robyn’s ex’s new wife. The two were told that Robyn and Dorian were work friends. Her daughter didn’t believe and to make things worse she thought her mom was secretly on a date with some rando.

Her daughter’s opinions aside, Robyn made it to the Brighton Beach apartment with Dorian. There, she met his girlfriend Anya and Dorian’s son Titus. Dorian convinced Robyn to go there because he secretly wanted to hand over millions of dollars in diamonds to his girlfriends. He was paid in diamonds by the Russians and he was going to hand it over to his family so that they could start over somewhere new. Robyn felt for Dorian. She truly did. She just couldn’t do anything about it and so she once again demanded to know what Dorian created. What is it that everyone wants? Dorian agreed to tell her at a bar and two Russian agents targeted them before Dorian could finish his story.

Robyn was forced to kill more men to protect Dorian. She also grew tired in this game he was playing and so she later brought him to Harry’s bunker. She demanded once and for all to know what he created. Dorian was done with his games. So, he told her. He created an algorithm that he named the Gold Algorithm that could hack anything and he tested it in front of Robyn and Harry. He created it to hack the algorithms in cryptocurrency like bitcoin.

It instead proved that it could hack anything and Dorian demonstrated that by hacking NORAD. Dorian was compared to Oppenheimer by Harry. Harry said that Dorian could be the destroyer of worlds with what he created. Dorian realized this himself and so he erased any data on the algorithm.

The only existing copy of this algorithm exists inside Dorian’s head. It’s why so many want him and why he tried going on the run. He didn’t want to live in a world where his program could be used by the government to start a nuclear holocaust. He didn’t want his son to live in such a world. Dorian figured out the moment news of what he did got out and he spent a bunch of money he doesn’t own because he thought his death was coming.

Only Robyn said she wasn’t going to let that happen. She told Harry that Dorian wasn’t going to die on her watch and she did the best to protect him. She reached out to Bishop because she knew she could trust him with Dorian’s whereabouts. Together, the two came up with a plan.

Bishop pretended to betray Robyn. He had the CIA pick her up with Dorian and the two were placed under arrest by Director Nash. Then, their armored detail was hit by supposed Russian agents. These fake agents grabbed Dorian and the director did what they knew she would do. She shot Dorian point-blank in the chest. She believed she had killed Dorian Endicott and that now other agencies couldn’t use him or his program against them.

But it was all a lie. Dorian was wearing a bulletproof vest and now he can escape with his family. The whole world believes he’s dead. He can disappear and no one will know. No one besides Robyn and her friends. She even returned the diamonds to him and that will keep his family comfortable for a while.

Robyn had much a harder time with her daughter. Delilah didn’t like that her mom was lying about being at work and so she asked her mom what else she was lying about and Robyn couldn’t tell her.