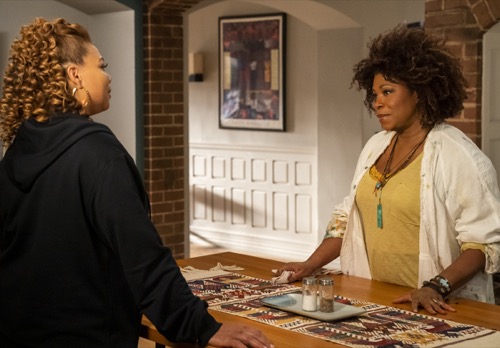 The Equalizer airs tonight on CBS with an all-new Sunday, May 16, 2021, season 1 episode 9 called “True Believer,” and we have your The Equalizer recap below. On tonight’s The Equalizer episode as per the CW synopsis, “McCall races to help a concerned wife locate her husband before he helps an extremist group carry out a bombing in the city; McCall worries that her anonymity will be compromised when Delilah asks her to participate in a social media video.”

In tonight’s The Equalizer episode Robyn’s daughter Delilah wanted to do a family dance video. Her friends have done videos like that and Delilah would normally have turned to her stepmother however her stepmother is out of town and so that only left her mother Robyn. Robyn couldn’t afford to do videos like that. She couldn’t have her face out there because of her ties to the CIA as well as her side work.

Robyn tried to tell Delilah that her charity wouldn’t like to see her twerking online. She said it would be embarrassing and so the only ones who know she’s lying are Robyn herself and her Aunt Vi. Aunt Vi knows the truth. She knows that Robyn is a former CIA and that she’s helping people. She and Robyn later discussed it. Robyn felt bad about lying to her daughter and her aunt reassured her that Delilah would be just fine without doing a TikTok video.

Robyn later went to work. She has a new client. Robyn was helping a woman who believes her husband Elias Wilson is up to no good and she has plenty of reasons to suspect this. Elias came home one night cover in blood. He claimed it was a work thing and that after tonight she’ll be proud of him. Only Elias was fired.

He was fired five months ago and he’s been pretending to go to work ever since. Elias also lied about where the blood came from. His wife checked the trash and she found his bloody shirt and a bloody knife. She handed over the items to Robyn and Robyn checked out Elias. Elias has been taking the train every day for the last five months. Robyn found out he got off at one stop and so she checked it out with Mel and they found the makings of homemade C4. It turns out Elias was building a bomb.

Elias was working with someone. They cleaned out a warehouse with bleach and whatever they have planned – it happens tonight. Robyn named him a terrorist. Harry later found evidence that Elias was a part of a group named the Truth Trappers and they call themselves patriots while claiming there was a deep state. These are the sort of people who believe they have to overthrow the government to put the right people in place.

They were terrorists and there was no, if, and, or, but about it. They were terrorists. They planned on setting off a bomb somewhere in the city and Harry managed to find a video of Elias with his new friends. One of them was a cop. Robyn sent the evidence she had to Detective Dante and she warned him about the threat to the city. Dante originally didn’t want to take her call.

Dante was a by-the-books man. He didn’t like working with people who crossed the professional line and so he’s been looking into Robyn. He’s been investigating her in the hopes of taking her down. Dante took her call this time because a terroristic attack was more important than arresting her. He looked at the evidence and he followed. Dante reported to his boss. They also found out the tripwire to the bomb had come from their own evidence locker.

This means Robyn was telling the truth when she said a cop was involved and neither Dante nor his boss wanted that to get out. They did their best to find the dirty cop. They were doing this while Robyn and her people were hacking Elias’s social media. They had tried asking his wife what location he would attack and she couldn’t name one because before this her husband was a rational adult.

Elias and his friends believe they were fighting back because their country had been overtaken by groups who crapped on the basic white man. That’s what they are. They’re basic white men who wanted to feel important and the only way they could think of was a bomb. Harry had hacked Elias’s social media. He was able to find Elias’s location and the good detective also showed up there because he had been following his dirty cop.

Robyn reached the suspects first. She fought the dirty cop and she tried to apprehend Elias, but he got away and so did Robyn when the detective showed up. Detective Dante hasn’t given up on arresting her. His boss told him to use one rock for two stones and so he would have arrested her if she had stayed behind and it’s a good thing she ran. And the detective was only able to arrest his fellow cop.

Which was no good for the situation because Elias was the one with the bomb. Elias still planned on setting off the bomb and his coconspirator had an excuse for everything when interrogated by Detective Dante. Dante had to pull favors to get a warrant on his house. He was carrying out that search warrant when Robyn called him and she told him there were actually two bombs. She had caught up with Elias.

She convinced him to hand over the bomb before setting it off at the electrical company and he also admitted that his bomb was just the diversion. There was a second bomb out there. Robyn knew she had to interrogate him to find out the location of the second bomb and she didn’t want to hand him over to the police because she was still trying to protect him. Robyn told him his wife sent her.

It’s why she’s trying to help him now rather than turn him over. Robyn sent the defunct bomb to Dante and Dante demanded the coconspirator but Robyn refused to hand over or even name Elias. Elias believed he was going after billionaire companies who didn’t care about the little guy. He was heavily in debt right now because his son was sick and he was fired before he could pay off the debt. Elias was not like the others.

He was angry about his situation and that made him lash out. Elias revealed that only Murtaugh knew the location of the second. Murtaugh was the dirty cop and he was the ringleader. He has tactical experience. He also worked with SWAT and so he was using his past to help him carry out a vendetta against immigrants. Murtaugh blamed immigrants for why the country didn’t care about basic white men.

Robyn reached out to inform Dante of Murtaugh’s true target. Together, they realized that Murtaugh was targeted the International Student Housing at Hudson University and that place has great security but it also rests on top of an old disused train station. Dante had the building cleared. He and Robyn went down into the tunnels to find the bomb and they found it. Robyn was able to disable the bomb.

Right after she did so, Dante tried to arrest her. She fought off the other cops and she walked away knowing Dante wouldn’t shoot her while she was disarmed. Robyn later returned Elias to his wife Amanda. He went there to say goodbye. He was going to need help with his financial situation and with being rewired to a sane rational adult and he also needed to lie low. His friend were all arrested. They were awaiting trial for terrorism and so Elias couldn’t let himself be found.

Robyn soon returned home. She and her group took down the social media platform that Elias and his friends were using and so that hate platform was ended once and for all. And she didn’t need to work on the TikTok video with her daughter.

They did a video but it was cats as heads and so it protected Robyn’s identity.