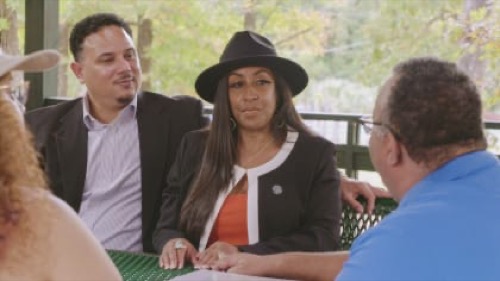 Tonight on TLC their reality show The Family Chantel airs with an all-new Monday, November 1, 2021, episode, and have your The Family Chantel recap below.  On tonight’s The Family Chantel season 3 episode 4, “Finding Your Roots,” as per the TLC synopsis, “The family heads to South Carolina to find out more about their ancestry, and Winter causes tension by unexpectedly bringing Jah. Pedro connects with his estranged cousin. Nicole fills in Coraima on the details of Alejandro’s unfaithfulness.”

In tonight’s The Family Chantel episode, Pedro got into a fight over nothing. His sister Nicole and her boyfriend Alejandro had broken up. He was messaging other women behind her back. She ended things and so there was no reason for Pedro to get into Alejandro’s face. Pedro had been upset because Nicole spent lockdown with her boyfriend and not their mother. Their mother spent the whole of lockdown alone. Pedro didn’t think that was right and he mainly blamed Alejandro and not his sister for it.

But it’s a mute point now. Alejandro and Nicole are no longer together. They broke up and Pedro was happy to see him go. Pedro hates Alejandro. He never trusted him. He never liked the fact that he was still married. It reminded Pedro of the situation between his parents because his father was married even as he was messing around with Pedro’s mother. And had two kids by her no less.

This cousin was the only one who could provide answers that he needs. Pedro was in New York to get those answers and so he missed out on the family trip. Chantel and her family went to the Carolinas to find out more about their family history. Chantel’s grandfather recently passed away. Karen’s father. Karen did some research after that and she learned that a lake in the area he grew up in had the family name. And so she started digging from there.

Karen soon learned that there had been a prominent white family with the same last name. They had owned a plantation on the same lake that was named after them and that they were slave owners. They owned twenty-seven slaves. Karen contacted a historian to see if she was descendant from one of the slaves and she was taking her whole family to the Carolinas to speak with the historian.

But what no one expected was that Winter would bring her boyfriend. Jah and the family were not close. They still hadn’t forgiven him for lying about the fact he has two children and not one. They also weren’t forewarned about him coming. Winter just assumed they knew she was bringing her boyfriend and that didn’t sit right with Chantel.

Chantel wants to at least be warned he’s coming. She, her mom, and her sister had planned everything down to the last detail. They had even arranged what outfit they were going to wear. Not once did Winter mention Jah or in any way stated that he was coming. She just assumed. Winter thinks this trip will be good for everyone because she wanted them to like Jah and she thinks they will once they get to know him.

She forgets that they already know him. They knew more about him than she did. They were the first to find out he had two kids and that included a son he was hiding. They were the ones who told Winter about the son. Not Jah. Jah is actually still angry with them about that because he claims he would have always told Winter and that’s a lie.

Jah being included on a now awkward family trip isn’t going to change anything. The family was traveling while Pedro was meeting with his cousin. Pedro found out his father who was Pedro Senior also has two sons by his wife and that one of them was also named Pedro Junior. This obviously hurt Pedro. He didn’t name his brother shared his name and to make things worse his father was apparently a great father to his legitimate children. He bonded with them. He would take them to the beach every Sunday and he always included everyone. He invited his siblings, his nieces, and nephews and so the cousin grew up with a great life in parr because of her uncle. And all the while Pedro and his sister were left out.

Like, why them? Pedro wanted to know why he was excluded. Why he didn’t get the great father? Pedro was angry and hurt and his cousin wanted to help heal that. She wanted to introduce Pedro to the family. She also wanted him to meet with his father and Pedro is not sure how he feels about that idea. Back in South Carolina, the family met with the historian. He confirmed that Karen is a descendant from a freed slave and that the former slave was also a man of means. It turns out his father who was his slave owner had given him to other family members after he died and that they in turn freed George Wiley after the Civil War. They also gave him forty acres from his biological father’s estate and that how he became a man of means. And so Karen was glad to find out about his because its connects her with her past.

The family later had dinner. River brought up why Jah came. He wondered if that meant he wanted to become more included and he said he did. He also talked about his faith. Jah is a Nazarene. They’re kosher-like version of Christians. Jah lives his life “biblically” and he talked Winter into it. Winter is also trying out his faith. She told Chantel that she was kosher and that’s how Chantel explained it to the server, but Jah said it wasn’t anything like that. Jah doesn’t eat pork or shellfish. Which in itself is kosher. Jah also follows his life according to the Nazarene faith and Chantel made a rather off-hand comment about how she doesn’t think God would send her to Hell for eating shrimp. Her mother agreed with her and so Jah eat a bottom-feeder, think like a bottom-feeder.

This set off Karen. Karen reminded Jah that she happily welcomed him on a family trip and now he was insulting her. It made Jah realize that he should have stayed home. River tried play peacemaker. He said everyone is entitled to their own beliefs and Jah then said that Karen and Chantel were trying to force Winter to changing her beliefs and so Chantel said that’s what he’s doing. And that Winter didn’t mind wearing Christmas sweaters before he came along.

Karen finally got them to drop it by reminding them that she’s the matriarch and that it’s a matriarchy but this offended Jah because he said in his confessional that he believes in a patriarchy and so he’s going to be staying away from Karen after she said that.