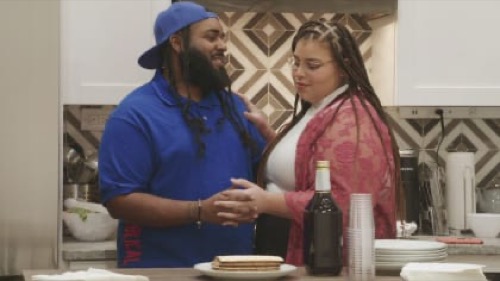 Tonight on TLC their reality show The Family Chantel airs with an all-new Monday, November 22, 2021, episode, and have your The Family Chantel recap below. On tonight’s The Family Chantel season 3 episode 7, “Breaking Bread,” as per the TLC synopsis, “Pedro arrives in the Dominican Republic to make peace between his family only to make matters worse. Winter and Jah host a dinner for the family to reveal their engagement. River decides to introduce Karen and Chantel to his girlfriend.”

So make sure to tune in tonight between 8 PM – 9 PM ET for our The Family Chantel recap.  While you wait for our recap make sure to check out all our television spoilers, news, recaps, and more, here!

In tonight’s The Family Chantel episode, Pedro was heading towards the Dominican Republic. He was going there to meet with family. Pedro was finally meeting with his father’s side of the family and he was scared about how they’d react once they met him. He was scared of being abandoned again. He was scared they would call him a “bastard” and ask him to leave.

But he was still going because he hopes they’ll welcome him. He wants to be wanted like anyone else would and he wasn’t bringing his wife for this trip just in case things went south. It was already tough as it is what with Chantel and her disagreements with his mother and sister. He didn’t want to add that on top of a tough situation. Pedro was going back to the DR and he was doing it alone.

Chantel stayed behind. She was staying on in Atlanta and she like her mother was wanting to know when she gets to meet River’s girlfriend. River has been quietly dating someone for a while now. Her name is Megan and she was older. She also has a son. River hasn’t met her son yet but he was ready to introduce her to his family and he was afraid of how they would react. His family hasn’t been the most welcoming to outsiders.

They put Pedro through the ringer because they suspected he married Chantel as a means to get to the United States. They basically humiliated Angenette right before her second wedding to Royal and then there was Jah. The family went digging into his past. They found out that he has a secret son and it led to him and Winter breaking up for a short time.

River was therefore right to be worried about his family. He didn’t know what they would do once they met Megan and that’s also why he was keeping Winter’s engagement a secret. Winter and Jah are engaged. He proposed and she said yes. They’re getting married and they haven’t told the family because they were also worried about the family’s reactions. Winter and Jah later invited the family over during the Sabbath.

They didn’t want to lose Winter. They wanted to show their support and so they went to her place to celebrate with her. They also tried to be supportive by bringing gifts. Karen brought scones. She knew they had to break bread and she thought they could do it with that.

But scones weren’t really how they celebrate. They had to celebrate with level bread. They also got to talking and Winter asked where Pedro was. Chantel was explaining how he was visiting his family when Jah cut her off. He was also quite rude about it. He didn’t even let her finish a sentence before he cut her off and said they had news. He then put on Winter’s ring and they announced they were engaged. And Chantel wasn’t happy.

Chantel doesn’t like Jah. She doesn’t trust him and again he quite rudely cut her off while she was speaking. Like he could have waited a minute or had even asked Chantel a question about Pedro. He could have at least pretended to care about Winter’s family and he couldn’t do it. He also was hurt when no one jumped for joy. The family basically told the couple not to rush into marriage and they told Winter to achieve her goals first. Finish things. Accomplish other things. The family didn’t want Winter rushing into marriage and they told Jah that as long as he treats Winter like a queen – they’ll accept him. They weren’t really happy about the engagement. No one jumped up for joy and that’s what Winter wanted.

Winter’s engagement announcement was a bust. The family was all sitting in silence as Pedro was being yelled at by his sister Nicole. Nicole doesn’t want to meet their father or have anything to do with him. She met him again when she was fifteen. She told him off for being a sorry excuse of a father and he never came around again. Nicole never mentioned this to Pedro. She was only saying it now because she doesn’t want to meet up with her father or his other kids and Pedro does. He wants closure. Nicole has already gotten that when she told her father off and so she doesn’t care. If anything, the only thing she cares about is how her family treats Alejandro. She and Alejandro were broken up and she still persists in defending him.

Nicole says her family treats her like a child. She doesn’t want them interfering in her relationships anymore and the more they badmouth Alejandro is the more she defends him. Only her family refuse to realize that and that’s why they kept making the same mistake. This was happening as Chantel and Karen were being introduced to Megan. River wanted his family to meet his girlfriend and he was hoping that once he got both mother and daughter onboard that everyone else would fall into line.