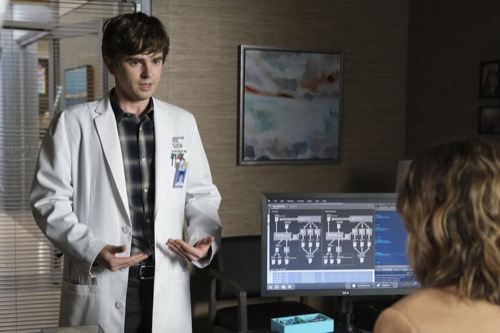 Tonight on NBC their new medical drama “The Good Doctor” airs with an all-new Monday, November 22, 2021, episode and we have you The Good Doctor recap below. On tonight’s The Good Doctor season 5 episode, 7 called, “Expired,” as per the ABC synopsis, “After visiting a possible wedding venue, Shaun and Lea happen upon a terrible car accident and discover Alma (Natalee Linez), a young pregnant mother who has been badly injured and needs immediate medical attention.

Back at St. Bonaventure, Alma’s condition worsens, and Shaun and Drs. Lim and Jordan are forced to deliver the baby prematurely. Meanwhile, Dr. Glassman is apprehensive when a figure from his past reaches out for help.”

Tonight The Good Doctor’s episode begins with Shauna and Lea looking at churches to get married while Aaron is looking to sell his place when his ex-wife shows up.

In the car, Shaun yells at Lea to stop when he sees an accident. He gets out and find out that a man has broken fingers, Lea calls him to another area of the accident where a women named Emma who is twenty six weeks pregnant is having tachycardia.

In the house, Aaron is there with his wife and he says he is moving to a small town in Montana and he thinks it will be good for him. She tells him that she needs his help, her husband is dying. His diagnosis is body dementia, it began two years ago but recently he has had bouts of confusion. They have found a experimental trial that uses deep brain stimulation to slow cognitive deterioration. She wants Aaron to look at it. He tells her that there are more doctors that have more experience than him in this, she tells him that she wants the truth, she doesn’t want to waste the time they have left.

Back to the accident, Shaun is performing a procedure to save Emma and he tells her that she is very lucky, they usually don’t drive to work that way.

Salen invites Morgan to dinner with Alex and Marcus and her.

Aaron goes to the hospital to speak to his ex-wife’s husband, Sunil, he explains to him some tests they are going to do. All of a sudden, he spaces out and asks why he is there. His ex-wife tries to calm him down by showing him photos of his family.

Alex is looking over Sunil’s xrays, he thinks he would be a good candidate for the experimental trial. Aaron joins him and looks at the xrays. Aaron tells Morgan that he is going to need his office back, he hopes she doesn’t mind. Aaron doesn’t think that Sunil has Lewy Body Dementia.

Shaun is in surgery, he tells Audry and Jordan he wants them to wear socks to his wedding, no shoes, the floors creak in the church. Jordan says no way, he is not going to rob her of wearing her new shoes. Emma is in stable condition after surgery.

Aaron is alone with his ex-wife, he says that Debbie thought he was controlling and selfish. He wants to go to Montana, nobody knows him and has no expectations of him. She says he has done this before, after Maddie.

Shaun is speaking to Emma, he tells her what they have to with her. Basically she either never walks again or she jeopordizes her baby’s life. She tells him that she can’t choose between herself and her baby, he tells her that she has to.

Shaun goes to speak to Aaron and tells him the floor squeeks at the church. He tells him that he is not going to be around, he is selling his house and moving to Montana. Shaun asks if he will be his best man, Aaron says yes. Aaron tells him that he is partners with Lea now, he should speak to her, without him and they can work out things from now on.

Morgan and Alex are looking at Sunil’s images, he has malignant carcinoma and it’s evasive.

Shaun is home, he tells Lea that they need to make a decision about the church and the squeeky floor and Aaron told him that she has things to tell him. She tells him that she didn’t go on a business trip a couple of weeks ago, she went to Montana to speak to Aaron and convince him to return him because she was worried about him. There have been so many changes at the hospital and she was worried about him. Change is hard and she knew that he was struggling. She confesses that she omitted some of the patient reviews, the ones where people said some really mean stuff, that is why his scores went up.

Aaron goes in to see Sunil, he tells him that the lesion in his neck is cancerous and has grown very quickly. He is suggesting a non-surgical approach, with targeted therapy and radiation. It should give him a few more good years before debilitating symptoms set in. He says he is sorry, there is no way of removing it, it is too dangerous. Sunil thanks him and says it is more than he asked for when they came to him.

Salen is waking down the hall with Marcus, she tells him that she invited Alex and Morgan to join them for dinner. He is a little surprised, he says she didn’t know they were going public, but he quickly forgive her and says that he will make a reservation

Shaun goes to Lea and tells him that she needs to correct his scores, they reflect him and his work; it has to be corrected. She says she can’t. He tells her that she has to tell Salen, she broke the rules, maybe she has to get fired.

Emma is having terrible abdominal pains, Shaun examines her and tells Jordan they have to rush her into an emergency c-section.

There is a surgery that can help Sunil, Aaron was reluctant because he didn’t want his ex-wife to lose someone she loves. But after they talk, he decides to go ahead and do it.

Sunil is in surgery, so is Emma. Shaun tries to save Emma’s baby, but it is too late, the baby flatlines and Audrey calls it. Everyone in the operating room is sad, Shaun looks like he is going to crack. Meanwhile, Sunil is recovering nicely, Aaron tells his ex-wife that he needs to take it easy for the next six weeks. She tells him not to go to Montana, he still needs Shuan, he makes him better.

Audrey goes to see Salen and tells her they just lost a baby because the hospital wasn’t prepared, the medication they needed was expired, all of it, no backup batch. Audrey tells her that the money she saved paid for her water wall and in her fifteen years there, nothing like this has ever been allowed to happen, her priorities are upside down and today they killed someone. The mother is recovering, Audrey tells Salen to calls her lawyers. Salen suggests that Audrey not tell the mother the truth, this is tragic day, but they can’t let a single event derail what they do there.

Shaun is in the inventory room, he takes all the spired medication and smaches them on the floor. Lea walks in, Shaun loses it, he tells her that she lied to him, he can’t trust her and he can’t marry her. Shuan is hyperventilating when Aaron walks in and tries to calm him down.

Sahun tells him that he is an awesome best man and a horrible mentor, he lied to him. If he was at the hospital the baby would not have died. Shaun has a complete melt down, he is on the floor, crying hysterically, hands over his ears, Aaron sits down beside him and tells him that he is there. Shaun falls into Aaron’s arms and continues to cry. Lea looks on.