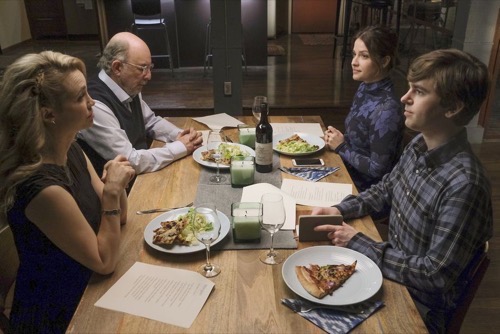 Tonight on NBC their new medical drama “The Good Doctor” airs with an all-new Monday, January 25, 2021, episode and we have you The Good Doctor recap below. On tonight’s The Good Doctor season 4 episode, 8 called, “Parenting” as per the ABC synopsis, “The team treats a teenage gymnast who experiences complications from her intensive training. Meanwhile, Shaun meets Lea’s parents for the first time.”

Lea tells Shaun that her parents are coming to visit and she is so weird because they are very judgemental.

Claire is examining a young girl name Daria, she says she has been eating a lot of Konjac noodles, the girls on her squad do as well. Claire tells her they were banned a few years in Australia. They are dangerous, indigestible – so they are going to have to take further tests and imaging on her.

Marcus is sitting with Olivia over lunch, she reminds him that she doesn’t want any perferrential treatment. He says he owes it to her and the hospital, he knows that she has unique talent.

Claire is in with her fourteen year-old patient while she gets an MRI, she has a giant mass of fiber blocking entry to her intestines. Shaun says she has to quit gymnastics, she has severe osteoperosis. She is a young girl with a bone density of an 90 year-old-woman. Her father wants her to compete first, Shaun tells her that it could lead to paralysis and death. Her father says to do what they can to clear the blockage, but leave the spine alone.

Claire and Audrey are sitting in front of each other, Claire tells her that she is suffering from PTSD and she doesn’t think she is dealing with it. Audrey says she is.

Daria’s father is getting checked out, he has been having severe heartburn for the past six months. Jordan tells him that prioritizing their work over their health is a bad idea, for him and his daughter. All of a sudden, he starts having chest pain. They bring him into surgery, It’s his esophagus.

Daria is now in surgery, she goes into cardiac arrest and it is very unexpected in a fourteen-year-old.

Claire is talking to Shaun, he says he better prepare himself for meeting Lea’s parents.

Lea and Shaun do a test run of meeting her parents, Morgan is Lea’s mother and Aaron her father. After a few minutes, Aaron says you can’t do this, a practice run for meeting with your family, you don’t know how things will go, family is full of surprises. Then Shaun says to Aaron, like you don’t like Lea. Aaron says he never actually said that and there is an awkward silence.

Morgan sits down with Olivia who is grumbling about Marcus telling her that she has to stand out more. Morgan tells her that it is ok to be a second, just be a good second.

Claire is with Audrey, she is trying to support her with her PTSD.

Ricky and Asher go in to see Daria, ask her if she is taking some drugs to improve her performance. At first she says no, then she tells the truth, yes and promises to stop. She was taking drugs to get bigger boobs, it wasn’t for performance enhancement.

Her father tells Shaun to fix her heart and her spine, he needs to be her father. She asks him since when did he start acting like her father, all they talk about is gymnastics. Then she says she is calling the team lawyer and filing for emancipation and she tells her father that he is fired.