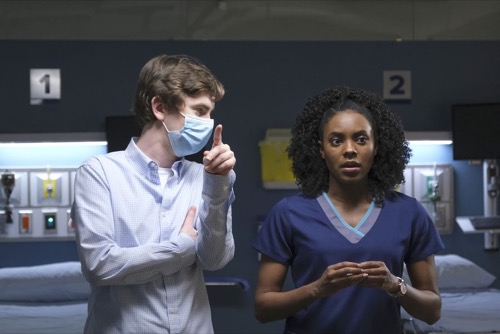 Tonight on NBC their new medical drama “The Good Doctor” airs with an all-new Monday, February 22, 2021, episode and we have you The Good Doctor recap below. On tonight’s The Good Doctor season 4 episode, 10 called,“Decrypt,” as per the ABC synopsis, “When the hospital is hit with a cyberattack threatening to shut down life-saving machines, Lea rises to the challenge and looks to outsmart the hackers to prove herself.

Meanwhile, the team treats an inspirational cancer survivor-turned-successful-philanthropist who harbors a dark secret.”

In tonight’s episode of The Good Doctor Morgan tells a patient, Jamie, that the results confirm that she is in N4 liver disease, she needs a liver transplant. She asks if someone has to die so she can live. Morgan nods yes.

Lea is in the elevator with Aaron, she is late, she got a flat tire. Claire has a patient who just came in, he almost drowned in a triathlon, Shaun is there as well Claire says that he has an experienced swimmer, something must have made this happen. They need a chest tube, but they can’t get into a cabinet, the code isn’t working, Claire takes an ax and smashes the glass to get the tube so they can save the patient.

Marcus tells Aaron that they will have to temporarily close the clinic, ER and divert patients. The good news, the MRI and radiology machines are still functional. Aaron tells him to postpone all elective procedures and he will call the cops. It is a cyber-attack and the ransom is two million.

Lea is in the computer room; she tells Aaron they have a problem. They actually hacked into the system three months ago and took their time to not only encrypt their servers but their onsite and cloud backups. They technically have data but need the encryption key. She says that he shouldn’t pay the ransom, he gives her twenty-four hours to fix this.

Claire is with her patient; he says since fighting cancer he can endure longer athletically and is surprised what happened to him. She tells him it could be a virus; Shaun is there and matter of factly says, his cancer could be back. Claire tells him they will take a full test to be sure.

Aaron goes into his office and Lea is there, she asks him what is going on, he gave her 24 hours. He says he authorized a negotiation, not a payment. She tells him that his cost just went up, it’s what happens when you listen to an insurance rep and not the head of your IT. They doubled the amount and activated Malware. If they don’t pay, they are going to delete their data and destroy all of their MRIs, CT, and X-ray machines.

Claire tells her patient that his cancer has not returned, he has a fungal infection in his lung. She tells him that they are going to start him on an anti-fungal drug. He prefers surgery, which is an option, but Shaun tells him that they can’t do it because he has had chemo.

Shaun goes to see Lea, he sits down to have a sandwich with her. She tells him off for interrupting her while she is working and says that he is disrespecting her. She gets up and says she has to go, leaves Shaun there eating his sandwich.

Morgan goes to see Jamie; she tells her that her donor has a fatty liver and cannot be a donor, Rachel. Morgan asks Rachel if she is willing to donate a kidney instead, she may be able to save two lives with one kidney.

Claire is with her patient, he is having difficulty breathing, she tells him that she has to change the medication and he says he wants surgery. She again says he can’t because he had chemo, he tells her he lied, he never had chemo and never had cancer. Shaun says it is good news, now they can do the surgery. Claire says they have to alert the charity, he faked cancer so could steal money, date models, and have his face on a Wheaties box.

Morgan shares her idea with Alex, a multi-organ chain. They need to find someone who wants to give an organ to a family.

Aaron goes in to check on Lea, she says she found an error. The serial numbers on the server didn’t match up, one of her techs spilled coffee on the server and switched it up three days before the hack. His screwup may just have saved them. Aaron tells her the insurance rep has negotiated the ransom amount below the original amount, he hasn’t authorized it yet, she has until 9 am.

Claire’s patient tells her that he helped far more people who had cancer over the years than he earned. She tells him that he has surgery in the morning.

Jordan tells Marcus that she always freezes, she sucks at this. He tells her to suck it up and get back to work, if she wants to be a surgeon she needs to have thick skin.

The next day, Lea tells Aaron they can restore the network with three hours to spare. He asks if she is sure, she says totally, 95%. He tells her that she has three hours to get to 100.

Audrey goes into the kitchen and tells Claire that she got what she wanted. She just got off the phone with a reporter who wanted a comment on her soon-to-be front-page exposes on Mr. Graham her patient, her source is an employee in Audrey’s department. Audrey tells Claire she is off the case and she is lucky she can’t prove it was her because she would be out of a job.

Alex goes to tell Morgan they did, they have their link, but the problem is that one of them is an inmate and Rachel refuses to give him her kidney because he murdered someone. Olivia explains to her that Chris was abused as a child, sexually, physically. The prosecutor didn’t see a brutalized kid, and they put him away for life, for fighting back. Then Olivia tells her that she is free to go.

Lea asks Shaun for his advice, he sits down. If she is wrong, all the imaging machines will self-destruct. But if she is right, she will have not let 2 million dollars go to horrible people. He tells her that he doesn’t know about computers and neither does Aaron, but she does and he respects her.

Claire goes to see Audrey and asks her why she didn’t trust her. Olivia walks in and tells Audrey there are complications with Mr. Graham. Audrey is on the way, she tells Olivia to get Shaun in there as well. In surgery, they are talking about the employee who called the reporter, and Olivia reveals that she is the one that did it, not Claire. Audrey tells her to scrub out.

Rachel is in surgery, she changed her mind. And in the end, Jamie gets her liver.

Lea goes to see Aaron and tells him that she did it, he thanks her and tells her well done. If he ever has another poker night, she is invited.

Morgan is with Jamie going over her meds that she has to take, Jamie thanks her for not giving up on her.

Olivia packs up her things, she tells Claire she is sure she will be fired. Shaun tells her that he will miss her but he doesn’t want to hug her. Claire hugs her and tells her if she needs anything to call her.

Claire goes to see Mr. Graham, he asks if it was her, she says no. He says he knew this day would eventually come, he feels vulnerable and exposed, but relieved. He says he thinks he will feel a little bit lighter.

Olivia is in the parking lot, Marcus walks up to her and tells her that he knows that she wasn’t the whistleblower, it was him. He says exposing that guy was the right thing to do, he never expected Audrey to blame Claire. And, he knows why she did it and risked losing her whole career there.

She says she never wanted to be a doctor, but every time she tried to tell her parents, her professors, him, they would pressure her until she backed down. She doesn’t want to be important or successful, she just wants to be herself, and she doesn’t even know who that is. He tells her that he knows exactly who she is, she is a resilient and amazing woman, and he can’t wait to see what else she becomes, he will be rooting for her.

Audrey goes to see Claire, she says she was wrong to accuse her and she is a good friend.

Lea is at Aaron’s house, she was invited to a poker game.