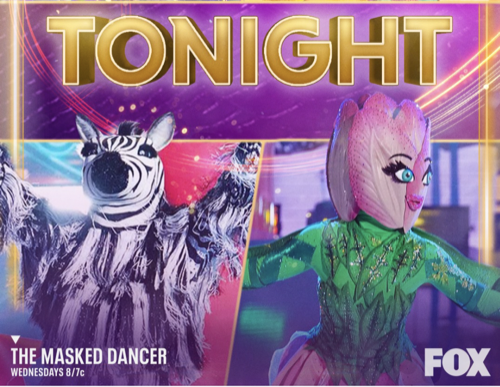 Tonight on FOX The Masked Dancer airs with an all-new Wednesday, February 10, 2021, Season 1 Episode 7 and we have your The Masked Dancer recap below. On tonight’s The Masked Dancer season, 1 episode 7 called “One Last Mask!,” as per the FOX synopsis, “FOX’S “LEGO MASTER’S” Host Will Arnett Joins the panelists’ desk In the semifinals, the remaining four dancers fight for their chance at the final three spots.”

Tonight, it is the final four in the semi-finals. The show opens up with a first-ever group dance; Sloth, Tulip, Cotton Candy, and the Zebra head out on stage together. Our panel judges are Paula Abdul, Ken Jeong, Brian Austin Green, and Ashley Tisdale with guest judge, Emmy nominated actor and comedian, Will Arnett. This week we are celebrating Valentine’s Day and Cotton Candy is up first. The clue tonight is how the contestant is directly tied to a panelist.

Cotton Candy says love always takes a backseat in her life because she is always rehearsing. She started on this path when she was six. She is dancing to “Get Ready” (2013 version) by 2 Unlimited, then “Hey Mickey,” by Mickey MIX DH. Clue: “Will, you showed me love on the masked dancer, so I am ready to show you love on the masked dancer.” Word Up: CoverGirl

Panel Comments: Paula: “I could be an actress that is doing a CoverGirl as. I think it is Gaby Douglas.” Ken: “I feel like you are really peaking at this point, you are upping your game. You clearly have a competitive spirit, and you clearly want to win this because you killed it on that stage. It could be an actress.” Brian: “I think she is an ice skater, Tara Lepinski.” Ashley: “That was so amazing, the semi-finals are off to a great start. I think it is Simone Bias.” Will: “I was really impressed with the athleticism, the flip, or whatever you called. It was so exciting and cool, I could feel your smile from inside coming out. I guess that it is Tara Lepinski.”

Sloth says when he was younger, he was kind of a bad boy, even a ladies’ man. The love of his life taught him that love is magic. He is dancing to “Dancing With A Stranger,” by Sam Smith feat. Normani. Clue: “Brian, who would have thought one of your co-stars would have been one of my co-stars. Maybe one day we can be co-stars together.” Word Up: App.

Panel Comments: Paula: “You were amazing, doing Samba rolls. Being able to partner dance like that, that is a special skill. It was impeccable. I’m thinking Matthew Morrison, he can dance, but I don’t know if he can dance like that, I think it is Maksim Chmerkovskiy.” Ken: “Judging off the clue package, stethoscope, someone who played a doctor, I am thinking of someone from Grey’s Anatomy like Patrick Dempsey fits the profile.” Brian: “I guess it is possibly Maskim Chmerkovskiy but I actually saw him the other night, so it can’t be him. But he has a brother, Val Chmerkovskiy.” Ashley: “You are the one to beat right now. I love how you are committed to your partner as well because you can tell there is magic there and it is what makes that dance come alive. I thought it was Hugh Jackman.” Will: “Maybe there is a third Chmerkovsky that you all haven’t even heard about.”

Zebra says he is genuinely surprised that he is still there because the other dancers are so talented. He says he has a huge heart outside the tough zebra exterior. Many years ago he lost someone close to him who was the center of his world and he is still devasted. He is devoting this song to her because she loved Bobby Darin. He is dancing to “Mack The Knife,” by Bobby Darin. Clue: “Paula, you gave me so much online and now I am giving you so much to say I love you.” Word Up: Box Office.

Panel Comments: Ken: “There have been fighter clues all this season, boxer, MMA, I saw a ring, what if it is a wrestling ring, it could be The Miz.” Brian: “I have been thinking you are the same person for a while now and I still think you are the same person, based on the clues, Oscar De La Hoya.” Will: “There was a certain determination in the way that you were moving and dancing, I love your body language, it was very exciting, I was mesmerized. I get this vibe of an athlete, a fighter. The way you move and the Vegas thing, this could be Mike Tyson.”

Tulip misses her best bud, she may have won more trophies than her, but she loves her so much. Her best bud double dared her to do the polka. Clue: “Ashley, I am the biggest Ashley Tisdale fan.” Word Up: Butterflies.

Panel Comments: Ken: “You are the most technically proficient dancer I believe in this competition.” Paula: “I still think it is Liza Coche.” Ashley: “There was a lot of Tik Tok with the clues, I feel very strong with who I think it is and I think I have watched her on TV, there was the photo of the mom and daughter dance, I think you are Mackenzie Ziegler.” Will: “You have a lot of natural ability and seeing you so athletic and nimble, it was such a unique dance and I loved the whole theme. I think it is Noah Cyrus.

The votes are in and the dancer with the least amount of votes the Zebra.