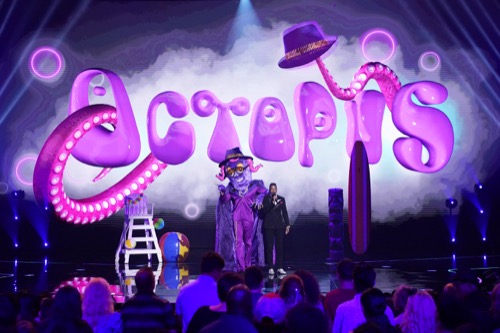 Tonight on FOX The Masked Singer airs with an all-new Wednesday, September 22, 2021, Season 6 Episode 1 and we have your The Masked Singer recap below. On tonight’s The Masked Singer season, 6 episodes 1 called “Part 1: Group A Premiere,” as per the FOX synopsis, “TV’s #1 entertainment show returns with a special two-night premiere event and a total of three jaw-dropping unmaskings. On Wednesday night, the stage is set with debut performances from the characters in Group A, ending with a shocking double elimination.

In tonight’s The Masked Singer premiere, an all-new season of the hit show began tonight. It’s Part A of a two-night premiere. Nick Cannon was back as host and there were new things this season. There was a “take it off” buzzer. The judges could hit that buzzer at any time and there was more. Season Six also kicked off with double elimination. the double elimination was at the very end but first, there were going to be performances.

The show was known for great performances. The first artist to perform tonight was Skunk and she was a woman. She chose the skunk because she believed in duality. The ying/yang. She took time off to focus on family. She was known for getting into fights. She also had a vase with the letter “d” on it. The “d” could be for diva. But it could be the first letter of her name as well.

The Skunk performed Sam Smith’s “Diamonds”. She has a great voice and she joined this season because she wanted to put herself back out there. The judges all threw out names. Ken named every diva that came off the top of his head but their first impressions get written down and put in a box. The next performance was from the Octopus. He mentioned that he has a problem with his ego and that it wasn’t until he put it away that he became successful again. He also used the word “blessed” twice. The Octopus performed “Tutti Frutti” by Little Richard. He gave an amazing performance and he has charisma. He was also really tall. The judges all voiced the idea that he was a basketball player.

It fit the height. They then had to think about basketball players that could sing and so someone said Shaq while one person said, Denis Rodman. Next up was the Puffer Fish. She was a woman and she was on the petite side. She chose the Puffer Fish because she wasn’t afraid of defending herself. She also hadn’t fit in as a child. She was the one who kept messing up all the experiments in science class. The Puffer Fish performed Doja Cat’s “Say So”. She sang, she could dance, and she showed confidence. Right away two of the judges thought Jessica Alba. The star was known for dancing on TikTok with her kids and the voice sounded like her to them. The next performance was from Mother Nature.

Mother Nature chose her costume because as the seasons changed, so did she. Mother Nature was not a mother and that’s something she had to accept. But her friends have become her family. She fiercely defends them and Ken seemed to have formed an idea about who she was before she even performed. Mother Nature performed “I’m Coming Out”. Her performance seems to have changed Ken’s mind about who that could be because he said he didn’t know who it was. He suspected it was Tiffany Hadish because her video also held a picture of a comedian named Wayne Brady. Nicole thought it could be Chelsea Handler. Robin thought it was Tracee Ellis Ross because he figured Tracee would come out singing her mother’s song.

The next performance was from the Bull. The Bull chose the Bull because he was forced to go on in spite of the many doors closed in his face and eventually, he got a “yes”. Then Hollywood took notice. The Bull’s video also had clues about baseball, an astronaut, and the closing doors symbolizing when he was finally accepted. The Bull joined this season of the show because he was quite shy about his singing. Which took everyone by surprise because the Bull could sing. He performed “Drops Of Jupiter” by Train. He gave off the boy band to Jenny. Robin thought it could be Sisqo. The judges put their thought down on paper and they entered it in the first impression box. Later, the first elimination was announced.

Jenny agreed with Ken in thinking it was Tiffany Haddish however the person behind the mask will not be revealed until tomorrow night.