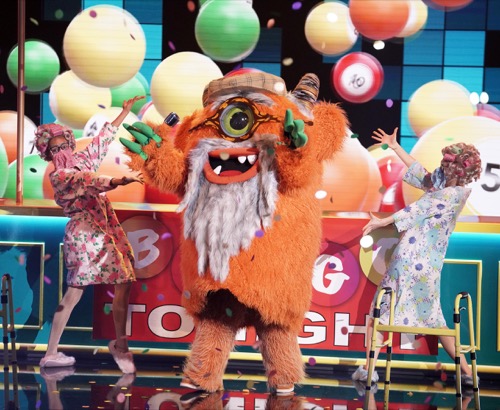 Tonight on FOX The Masked Singer airs with an all-new Wednesday, March 17, 2020, Season 5 Episode 2 and we have your The Masked Singer recap below. On tonight’s The Masked Singer season, 5 episodes 2 called “Group B Premiere – Shamrock and Roll,” as per the FOX synopsis, “The second group of celebrities debuts another set of all-new jaw-dropping costumes.”

Tonight, we begin with guest host, Niecy Nash, stepping in for Nick Cannon, and it is the big group B premier. The panel tonight is Ken Jeong, Jenny McCarthy Wahlberg, Nicole Scherzinger and Robin Thicke.

The first masked singer is the Black Swan. The clues say she is rare and she fell under spell and didn’t think she would see the light again, there is a chess piece and a blue diamond ring, her fateful flock rescued her and set her free. The Black Swan is singing, “Barracuda,” by Heart.

Panel Comments: Ken: “I thought this was someone who is a professional recording artist but if she is out of her comfort zone, then maybe she is an actress that can sing. All the clues to me point to Queens Gambit. It could be Anya Taylor Jones.” Jenny: “I’m getting girl group vibes, maybe Mel B or Cheryl Cole but then I saw the five, maybe Fifth Harmony.” Nicole: “I was feeling the Fifth Harmony vibe too, but someone who is an amazing singer and maybe this is something different for them, from X-Factor is Leona Lewis.”

Next is Grandpa Monster and he is coming down the stage with an oversized walker. Reflecting on his life he can’t believe how much of a troublemaker he was, always acting at. He became a star pupil and is still trying to shake his bad reputation. Grandpa Monster is singing, “Mambo No. 5,” by Lou Bega.

Panel Comments: Ken: “Maybe he is not an actor at all, the clue package said he was a trouble-making fool. I was thinking Scott Disick, the 97 was because he only dates women that were born after 1997 and he was in a show called punked.” Jenny: “I thought maybe an athlete and based off the clue package, he could be a heavyweight, maybe a wrestler, he had a bad reputation, I am thinking The Miz.” Nicole: “We all don’t think he is a professional singer.” Robin: “There were a few things that jumped out at me, there was acting out and the dumb punk, maybe Ashton Kutcher or Dax Sheppard. Then I saw the football clues, the x’s, and o’s.”

Our next competitor can change color it’s The Chameleon. He says he just doesn’t blend in, he puts the tech in technicolor. It was all because of his pops who told him to keep up with the times. When his career tanked and he almost totally lost, he leaned back on what his pop taught him. I used his tech-savvy skills from his childhood to amplify his career and change the game. Now he is here to change this game, he won’t be blending in. The Chameleon is singing, “Ride Wit Me,” by Nelly.

Panel Comments: Ken: “I’m thinking that maybe this is an NBA player, or is this someone who has played with 23 LeBron James. This does look like Dwight Howard and he just won a championship.” Nicole: “I was getting DJ vibes, someone like Calvin Harris. But then, he came out with a body like tall Jesus, he has platforms on. This is Ken’s daddy, Nick Cannon.” Jenny: “I would buy that album tomorrow with you singing on it. I am the Queen this season, and I sm stumped.” Robin: “There is a person in music and I know that his father is a music record producer and he is also a DJ, I think it might be Redfoo, whose father is Barry Gordy.”

Another masked singer, this one is The Pheonix. When people see him, they always see a winner, and although he has been on many magazines people see him behind a mask. His dad taught him how to shoot for the stars, and people see him as a superhero. His dad was proud of what he did. This old bird knows how to turn heads. The Pheonix is singing “Tik Tok,” by Kesha.

Panel Comments: Nicole: “This was game-changing. I was thinking Tim Gunn or Jonathan Van Ness.” Jenny: “I can tell you that Pheonix and I have the exact same singing voice. I will say spectacular. Could this be Caitlyn Jenner?” Ken: “I was thinking Caitlyn Jenner, but it is someone disguising their voice.”

Ken gets a gift from his “daddy,” Nick Cannon, it is a booster seat!

The last masked singer is Piglet. He is a hopeless romantic. Some flowers have very sharp thorns and he wears his heart on his sleeve. The Piglet is singing, “Speechless,” by Dan & Shay.

The Pheonix is Caitlyn Jenner.