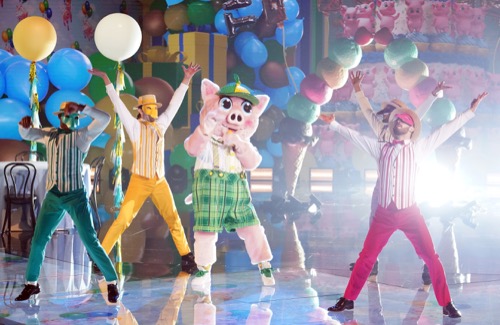 Tonight on FOX The Masked Singer airs with an all-new Wednesday, March 31, 2020, Season 5 Episode 4 and we have your The Masked Singer recap below. On tonight’s The Masked Singer season, 5 episodes 4 called “Rule of Claw!,” as per the FOX synopsis, “Another wildcard contestant debuts when the members of Group B return for their second performances of the season.”

In tonight’s The Masked Singer, the episode begins tonight with Group B, they are back and they are ready to defend their spot against a new contender, the Group B Wild Card. Our panel is back; Robin Thicke, Jenny McCarthy, Ken Jeong, Nicole Scherzinger, and our guest host Niecy Nash.

Grandpa Monster is up first tonight, in his clue package we see Santa’s hat and a photo of someone doing the splits. He says that he was once all alone in the wild and left without any food, and he has traveled the world and sold-out arenas. Before he begins to sing, he tears up a pic of Piglet. Grandpa Monster is singing, “Bad Reputation,” by Joan Jett. Grandpa Monster’s first crush: The Rock, Dwayne Johnson.

Panel Comments: Robin: “You ripped it, man, you keep picking those kinds of songs and that matches your dance moves and your energy, you can go all the way. That was a blast. I think it is a very close friend of The Rocks, Jack Black.” Ken: “Oh snap I think I know who this is, there is no one that likes to rock more than Kevin Hart. He’s got the best energy, and he owns a jet. The guy is big timing it right now.” Nicole: “We saw the dog, which was a boxer, the more I thought of the bad reputation, I thought of Jake Paul. He’s got so much energy, he is so much fun.”

Piglet is next and love songs make him feel right at home. We see a locker room with a football, and he mentions that he is a hometown hero. There is a knight in shining armor and a football helmet with a mustang on it. Piglet is singing, “Good To Be Alive (Hallelujah),” by Andy Grammar. Piglet’s first crush: Meg Ryan.

Panel Comments: Ken: “I got nothing right now. He gave football clues, maybe this is an actor who can carry a tune. I think this could be JC Chasez. I’m on fire and I am after Jenny’s crown.” Nicole: “I would be so excited if it was JC, I love JC. I think it is Austin Mahone.” Jenny: “I was feeling that boy band vibe when I first saw Piglet and Jordan Knight can sing very well, but there was a horse, and his brother has a farm, so I think it may be Jonathan Knight.”

The Black Swan is back and she admits that even though she seemed confident last week she was terrified. She is thankful to the person that gave her life and the confidence to go on this journey. She let someone go, which gave her the strength to soar. It was a very tough decision. And now, they are together and soaring. The Black Swan is singing, “In My Blood,” by Shawn Mendes. The Black Swan’s first crush: D’Angelo.

Panel Comments: Ken: “Of all the singers you have the most spirit, you want to win but you want something else, whether it is redemption or to prove yourself. There is something that is driving you that is beyond this competition. Great Job. This is going to cost me, but this could be Lindsay Lohan. I know I sound like an idiot.” Nicole: “It could be someone from D’Angelo’s era, or someone younger. We saw the scale of justice, I got a lot of XFactor vibes, maybe Demi Lovato.” Jenny: “I think Ken’s guess is terrible again.” Robin: “It is definitely someone with a complicated relationship with her parents, I heard birds of a feather. I thinking of Ashley Simpson.”

The Chameleon knew if he was going to hold his own with these powerhouses he had to bring it. He has made it his quest to make others shine. Tragedy struck when he lost someone close to him and now he honors her by letting everyone know they are accepted. The Chameleon is singing, “21 Questions,” by 50 Cent featuring Nate Dogg. Chameleon’s first crush: Selma Hayek.

Panel Comments: Nicole: “Chameleon is the coolest. I saw a cheese plate, the tailor tape, I think it could be Dwyane Wade.” Jenny: “I think it is 2 Chainz, he is from Georgia so matches with the peaches.” Robin: “You have so much swag and you pick the perfect songs to get us all dancing, but I can’t figure out who it is yet. But, great job.” Ken: “I was thinking basketball player, like Iman Shumpert.”

The Crab is tonight’s, Wild Card. He has dreamed of being a star for his whole life. He felt like a king crab when his dream came true and everyone around the world wanted to be like him. But, tragedy followed, and trauma. The Crab is singing, “Ain’t No Sunshine,” by Bill Withers. The Crab’s first crush: Janet Jackson.

Panel Comments: Nicole: “I don’t know who you are, but I feel I know you from you singing your heart out in that song.” Jenny: “This is the wild card we needed, we needed someone to pull on our heartstrings.” Ken: “Hearing the clues, I was thinking of Lenny Kravitz, but with the power of your music, I was thinking of Bobby Brown.” Robin: “The age makes sense, with his crush being Janet Jackson, but I don’t have it locked in yet because of his vocal tone. It may be Johnny Gill.

Grandpa Monster has the least vote and will be unmasked tonight – he is Logan Paul.