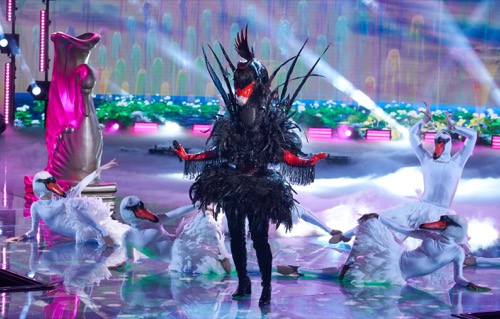 Tonight on FOX The Masked Singer airs with an all-new Wednesday, April 7, 2020, Season 5 Episode 5 and we have your The Masked Singer recap below. On tonight’s The Masked Singer season, 5 episodes 5 called “The Ulti ‘Mutt’ Wildcard,” as per the FOX synopsis, “The remaining singers battle it out for their spot in the final eight; another wildcard enters the competition looking for a chance to steal a spot in the game; an unmasking.”

In tonight’s episode of The Masked Singer, The episode begins with a pinky promise that the new Wild Card is going to blow up the show like never before. Tonight is the Group B finalists – Black Swan, Chameleon, Piglet, and Crab.

The first celebrity to perform tonight is the Black Swan and she admits that with every performance she is less nervous. She says when she started her career she didn’t know how her appearance would be perceived, and now, she just stays true to herself. We see the state of Montana written on a bag and a black cat. The Black Swan is singing, “How Will I Know,” by Whitney Houston. We get to see one meaningful item from the Black Swan’s home: a unicorn that commemorates one of her best friends, an incredible singer, who passed away and is no longer with us. This friend really taught the Black Swan how to be herself, she was one of a kind, and this is one of her most treasured possessions.

Panelist Comments: Jenny: “You are so amazing, what a beautiful voice. We have to see more of your range without a doubt, you are a front runner. That was a vocal shut-up to everyone else. Tori Spelling was a unicorn on our show, so maybe there is a connection in some way with that, But then there are more clues that lead me to think Emily Osment.” Nicole: “You are the full package, you came out here and put on a full show, singing, and dancing. Great job.” Robin: “I have been from the beginning, the voice, the style I was singing someone like Ashley Simpson. But today, I saw the black cat, the justice scales last time, maybe Victoria Justice.” Ken: “This is hard, from the clue package I think of my friend, Brenda Song, her last name is Song, you are going to be on The Masked Voice and you have an open invitation to I Can See Your Voice.”

Next is the Piglet, he says years ago he was getting grilled and we see a genie lamp and a lei from Hawaii. He was rescued and turned his life around. The Piglet is singing, “7 Years,” by Lukas Graham. Meaningful item: a pair of dog tags with a “P” on them.

Panelist Comments: Jenny: “I haven’t heard that song before and it brought up so much emotion in me, the way you sang it. I can tell that you are a family man, it meant so much to me. I want to rush home and hug my son and hold him tight. I don’t know who you are but you touched my heart and I hope you win this competition.” Nicole: “I am thrown here, I thought I heard a bit of a different voice this week, With the dog tags I was thinking of Kevin Richardson. Initially, I thought boy band, but this time I thought of AJ McLean.” Ken: “With the dog tags I was thinking of my friend, Bradley Cooper. Then I sobered up and I thought Zayn Malik.” Robin: “Whoever you are I can’t wait for you to be unmasked because I should know who you are.”

Our next character is the Crab, being on the stage for him was tough both physically and mentally. He got into all sorts of trouble as a youth. His mom tried to teach him how to cook, while she was teaching him values. And now, cooking is his passion and the heart and soul of his home. We get to see BBQ, and mac & cheese. The Crab is singing, “Give It To Me Baby,” by Rick James. Meaningful item: A bowler hat like his idol, Sammy Davis Jr.

Crab says he needs a break, he keeps saying, “take it off.” They take crab backstage and he says, “it’s hot, take it off.”

Panel Comments: Nicole: “I didn’t expect that, last week you had me in tears and tonight we were grooving it out. My favorite thing about you is your tone, you have got this tone that I feel like I have heard before, delicious like crabs.” Robin: “Great song choice, brought out the fire and the flavor. Last time was pure emotion, this time you got us out of our seats.” Ken: “Maybe this is someone who performed at the Super Bowl, I am thinking of someone like Boyz II Men.”

Next on deck is the Chameleon, he says it felt so good impressing the panel last week with his flow. But the person he wants to impress the most is his little lizard. He parties less and practices martial arts, and it helps him to process his emotions. Tonight, he feels like a superhero. Chameleon is singing, “Hip Hop, by Dead Prez. Meaningful item: chicken wings.

Panel Comments: Nicole: “The swag is just dripping off him, he is the coolest. You sound like a record, like on the radio. I think it Waka Flocka Flame.” Jenny: “You know what I want to do with you, I want to go to the after-party. We are in the presence of a huge massive star, it could be Machine Gun Kelly.” Robin: “I think this is Wiz Khalifa.”

Next, the Wild Card is unleashed and it is the Bull Dog. We get to see some clues that Niecy says, are sure to be a dog treat. His whole life he had to fend for himself, attack any challenge that came his way. He says he is the sexiest dog alive, that is a big softy inside. We see “B99” and he says he is dedicating his performance to someone very special. The Bull Dog is singing, “Candy Girl,” by New Addition. Meaningful item: “And, live from New York It’s Saturday Night.”

Panel Comments: Ken: “B99 stands for Brooklyn 99 and this is Andy Samberg is the star and creator, and SNL performer. But this sounds like Chris Tucker.” Jenny: “When I saw that clue I thought Eddie Murphy, but maybe another SNL alum, Chris Rock.”

Niecy reminds us that it is a game-changing season, the vote will not count. Instead, she decides who gets unmasked. Niecy chooses the Bull Dog.

The Bull Dog is Nick Cannon. He is back!