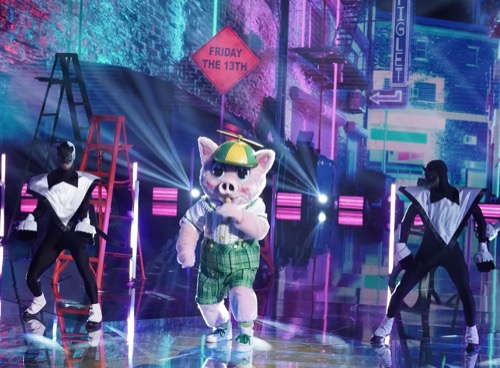 Tonight on FOX The Masked Singer airs with an all-new Wednesday, May 12, 2020, Season 5 Episode 11 and we have your The Masked Singer recap below. On tonight’s The Masked Singer season, 5 episodes 11 called “The Quarter Finals – Five Fan Favorites,” as per the FOX synopsis, “The final five singers perform in the quarterfinals to see who advances to the semifinals.”

In tonight’s The Masked Singer episode, the episode begins with host Nick Cannon who is unmasked and wearing a hot pink shimmering suit. The feisty five are vying for the top place and to be able to hold the coveted golden mask trophy. Our panelists are back tonight; Robin Thicke, Jenny McCarthy, Ken Jeong, and Nicole Scherzinger. Our guest panelist tonight is Rob Riggle and Ken says they worked together on The Hangover.

The remaining performers are in group A: Russian Dolls and yeti, group B: Black Swan, Chameleon, and Piglet. And Cleudle-Doo, a secret celebrity guest will continue to provide clues about the contestant’s identities.

The Russian Dolls are first tonight, and they say that the star that has given them inspiration in their lives is “Weird Al” Yankovic. They receive fan mail, “I was a fan of you individually, but when I saw your band together in person – Wow! Like I can’t even. Love you to the moon and back again.”

Panel Comments: Rob: “That was amazing. I think this show is one of the weirdest and most entertaining shows on television. It did not disappoint right out of the gate, Russian Dolls Bringing it. This is Devo.” Ken: ‘This could be Savage Garden, they have similar vocals, but I think it is Bare Naked Ladies.” Nicole: “I know for sure who it is, I am determined. It is Hanson.”

The Black Swan is up next and she says she has had some disappointments in her life and it has made her afraid to take risks, so she tries to say yes to things that scare her. Her inspirational star is Cher, she was a part of her world the very first time she shared her voice. Fan mail, “You’re mega-talented. I’ll never forget when you were on Oprah and were so excited you recently got the major recognition you deserve. Love ya.”

The Black Swan is singing, “Thinking Out Loud,” by Ed Sheeran.

Panel Comments: Jenny: “Black Swan you got me once again with goosebumps all over my body. I literally wrote down goosebumps in sweaty latex. That tone, those ad-libs, you killed it, the stage is yours tonight.” Ken: “A lot of clues to connect, but I will. I am going to go with my gut, Dua Lipa, she is a family friend.” Robin: “I see Cher and I see Oprah, I think this might be Normani.”

Piglet has been a serious guy his whole life, but Piglet has shown him how to be a big ham. His all-time idol is Bruce Willis. Piglet’s fan mail, “Whether on my TV or in my headphones, I am so lucky I discovered you in the ’90s, but I’ve never been jealous of your public relationships. P.S. I drew your picture.”

Panel Comments: Rob: “Unbelievable, the beginning kind of blew me away. He nailed it, pig “lit.” Jenny: “You know who worked with Bruce Willis in the ’90s, I think this could be Justin Timberlake.” Ken: “This might be an action hero, avengers big, like the last movie I was in, could be Jeremy Renner.” Robin: “Nick Lachey from 98 Degrees.”

Yeti is next and he is the last wild card standing. He has the pressure of wanting to be perfect. One of his greatest inspirations is Diddy who he got to work with, he helped him reach the top of the mountain. Yeti’s fan mail, “You are a true triple – Nah – quadruple threat. I’m excited you stepped up with a Masked Singer legend and I am proud to be your biggest fan.”

Yeti is singing, “Bless The Broken Road,” by Rascal Flatts.

Cleudle-Doo disrupts the show and says that they are so far off with who Yeti is and he should be a panelist, not them.

Chameleon is next and he says even with a theatre background he has never had to do a show where he has had to shake his tail. He hopes his family will be proud and nobody knows about keeping up the fight than his personal hero, Jackie Chan. Chameleon’s fan mail, “Any Friend of Martha Stewarts is a friend of mine. I even saw you play at Madison Square Garden, I wish you only success.”

Panel Comments: Nicole: “That was like MTV performance right there. That was crazy.” Jenny: “Each week everyone tries to go bigger, Chameleon doesn’t have to do that.” Rob: “You are a tall Chameleon, Snoop Dogg is tall but so is Blake Griffin.” Ken: “Something tells me this is a legend and my family friend, Young Thug and he makes reference to Jackie Chan in a few of his songs.”

The Russian Dolls are Hanson.