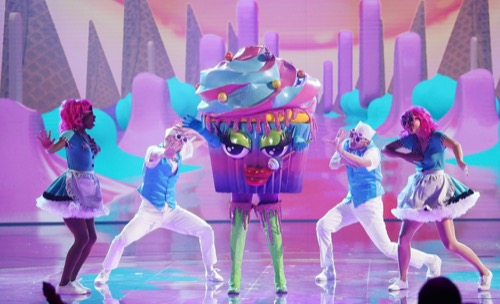 Tonight on FOX The Masked Singer airs with an all-new Wednesday, September 29, 2021, Season 6 Episode 3 and we have your The Masked Singer recap below. On tonight’s The Masked Singer season, 6 episodes 3 called “Group B Premiere,” as per the FOX synopsis, “Meet the second group of celebrity singers, “Group B,” in all-new jaw-dropping costumes and see WHO will be unmasked!”

Tonight belonged to Group B! Last week, Group A performed over the course of two days and there were several eliminations. But things were different tonight. Group B opened up with a performance from the Queen of Hearts. She walked out onto the stage like she’s done this countless times before and her clues were very telling. She has a strong southern accent. It came across in spite of the auto-tune drowning it out and there was more information hidden inside the clues. She had the tin man serve her drinks. She was clearly a fan of both Alice in Wonderland and the Wizard of Oz. The Queen of Hearts also performed the song “Born This Way” with great skill. She knew how to hit those high notes and her voice came from pain.

The Queen of Hearts admitted she came from a troubled childhood. This plus her performance had Nicole believed the Queen of Hearts could be Britney Spears. She has been watching a lot of Free Britney documentaries lately and so her mind was already predisposed to it. Jenny however thought it could be Fergie because of the legs. The legs looked like Fergie’s. She also thought the accent could be misdirection and the other judges weren’t buying it. Ken thought it could be Renee Zellweger. Renee played Judy Garland in a movie and the tin man had been included. But there’s no telling what Robin thought. Robin’s mind was up in the air and the show didn’t reveal his mindset on the matter.

Next up was the Mallard. Mallard claimed he was used to covering his face and he too had a southern accent. There were cowboy boots hidden in his clues and he showed a picture of Chris Pratt with the words BFF on it. The Mallard was clearly a professional with the way he tackled a country song like “Save A Horse (Ride A Cowboy)”. The Mallard was another one who divided opinions among the judges. Both Jenny and Nicole literally named every country musician they could think of and possibly thought could be the Mallard while the guys had firmed guesses. Robin thought the Mallard could be Garth Brooks. Ken thought the Mallard could be Billy Ray Cyrus. They named names and the ladies on the judges’ panel couldn’t think of one in particular.

The next performer was the Cupcake. The Cupcake was a woman with a growly voice and she performed “Heatwave”. The Cupcake revealed in her clues that she used to perform with others and now she’s solo. She was also tall for a woman. Her clues revealed a lot of hearts and love and so Robin thought she could Jennifer Holiday who had been in the original “Dream Girls”. Only leave it to Ken to go out there with outrageous claims. He actually thought the Cupcake could be Tina Turner and the crowd booed him. They were so upset when he said it could be Tina. They were mad at Ken for even posing the idea and so everyone was hoping this wasn’t like those rare times that Ken turned out to be right. Nicole thought the Cupcake could be either Roberta Flak or Leslie Jones. She thought Roberta Flak because of the clues. And Leslie Jones because of the height.

The Dalmatian went next. He hit host Nick Cannon with his tail and Nick thinks he did that because they know each other in real life. Nick’s thoughts aside, the Dalmatian did reveal some very telling clues. He showed that he was an athlete. He said he saved up his money at twelve to buy his own gear and there was other stuff as well. There was the painting known as The Scream. There was basketball and boxing in the clues. The judges didn’t know if he was proficient at both or if he just enjoyed the one while did the other for a living. Then there was the Kat. Jenny later thought the Dalmatian could be Katt Williams because of the cat while the other judges ignored the cat aspect. Robin thought the Dalmatian could be Nelly because Nelly was both rapper and athlete.

Ken thought the Dalmatian could be Reggie Bush. The Dalmatian performed a rap song and he was able to keep up with the rapping aspect of it. He was therefore a rapper and Robin’s guess made the best sense. But the last performance of the night went to the Banana Split Duo. They were a duo with one playing the piano and the other singing. They performed the song “A Million Dreams”. They also revealed certain things in their clues. The female part of the duo admits to moving to LA to make it and finding herself having to beg for her daytime job back after her big break didn’t pan out. The duo has collaborated on several projects. They also each have solo careers and so that got the judges buzzing. Robin thought the duo could be Faith Hill and Tim McGraw who were married and sometimes worked together.

Jenny thought the duo could be Katherine McPhee and David Foster. Which Robin disputed because David Foster was an honorary uncle of his. The next guess came from Nicole. Nicole thought the duo could be Emma Stone and Ryan Gosling who’ve starred in a couple of movies together and one of them being a musical. The duo could genuinely have been anyone. Later, the first elimination of the group was announced and it was the Dalmatian. Robin and Nicole both said, Nellie. Jenny’s first impression was Steve Harvey and she changed it to someone else. Ken was sticking by his Reggie Bush claim and it turns they were all wrong.

The Dalmatian was Tyga.