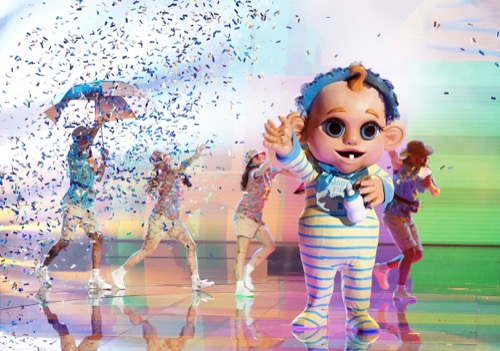 Tonight on FOX The Masked Singer airs with an all-new Wednesday, October 6, 2021, Season 6 Episode 4 and we have your The Masked Singer recap below. On tonight’s The Masked Singer season, 6 episodes 4 called “House Party,” as per the FOX synopsis, “The “Group A” members return, and a new wildcard enters the game.

Tonight’s episode begins with Group A, they are back! The first group is back and they brought along a new Wildcard for House Party Night. Up first was the Bull. The Bull had many clues in his clip. He admitted he was a wildflower when he was a kid and that it had been a while before he came out of his shell. He also showed he was now a party animal. There were images in Carnegie Hall. There was also the Bull’s singing capabilities because that was perhaps the biggest clue to revealing who he is. The Bull performed Britney Spears’s “Circus”. He had a great falsetto. He could hit those high notes and so the judges later threw around some names. Jenny thought the Bull could be Donald Glover because the Bull was an admitted rapper. Glover sings as well as raps and the other judges moved away from the rapper aspect.

They have yet to hear the Bull rap and so Robin thinks the Bull could be someone from Broadway. He suggested Anthony Ramos from “Hamilton”. Nicole suggested Leslie Odom Jr who was also in “Hamilton”. Next up was the “Hamster”. He too was a party animal and he was known for trickster ways. He peed on Nick Cannon last time. This time he showed that he could sing by performing “Crazy Little Thing Called Love” by Queen and he rocked it out. The Hamster also showed that he was in fact a comedian when he wants to be. This set off the judges and they all started to name the comedians they knew. Rob Schneider was a big one. Will Ferrell being another. Nicole even added John Leguizamo because she thought she heard a Latin flair while the Hamster was performing.

Next up was the Skunk. The Skunk has been to some of the most epic parties around and she used to be the hostess with the moistest and then she withdrew a bit. The Skunk said she now just lets people she trust in. Her other clue was a boom box and that could mean anything. The Skunk performed “Midnight Train to Georgia” by Gladys Knight & the Pips. She sounded amazing. She had the chops to handle that legendary song and so everyone thought it was one of the legends performing. Nicole thought the Skunk could be Tamar Braxton because she saw that they had Puffer Fish in their packages and that was revealed to Toni Braxton. There was also the cookies clue. This made Ken believe the Skunk could be Taraji P. Henson. There was also that hit about Empire and so Ken’s guess made sense this time.

The Baby was next. He chose the Baby persona because he was a father and he wanted to show his love for kids. But as time will show, the Baby was also a big kid himself. He performed the theme song to the Flintstones and he even put on a whole performance. The Baby also showed he was on a road a lot. He had to take his kids with him and his final clue was that he brought a grill to the party. A grill that he said he had been known to bring the grease. Right away, Jenny suspected the Baby could be John Travolta. The others thought it could be Bruce Willis because he was the voice in the movie “Look Who’s Talking”. Robin also threw out some Rollin Stones name and Ken shot that down because no way would one of them be wearing a costume to look like a giant baby. A beer bottle or a prescription bottle perhaps. Not a baby costume.

Tonight’s Wild Card was next. The Pepper chose that insignia because she’s always trying to be original and keep things spicy. She’s from LA. She’s a performer in real life and she showed that as she performed “Jealous” by Labrinth. The Pepper had everyone in tears with her performance. She is an amazing singer and she moved everyone. She also left everyone guessing. No one knew who she was. The judges all put in their first impressions and the last person to do so received punishment. Jenny was the last one. She had to eat a spicy pepper and at first, she thought she could handle it. Then the spiciness kicked in. she ended up needing to drink a glass of milk and she chugged it down like it was a frat party.

The judges all thought the Pepper could be a child star. A child star that’s all grown up now and so someone mentioned Hailee Steinfeld but the Pepper could truly be anyone because none of them could figure this one out. Later, it was revealed the person that was eliminated was the Baby. The judges’ first impressions were all over the place. Robin thought it was Chuck Norris. Ken thought it was Hugh Jackman. Jenny thought it was Kurt Russell. Nicole thought Michael Cain. None of them stuck with their first impression. Jenny even got the audience excited by saying Bruce Willis and it turns out the Baby was Larry the Cable Guy. He actually did a movie with Jenny. She should have known it was him and she completely blanked on it.