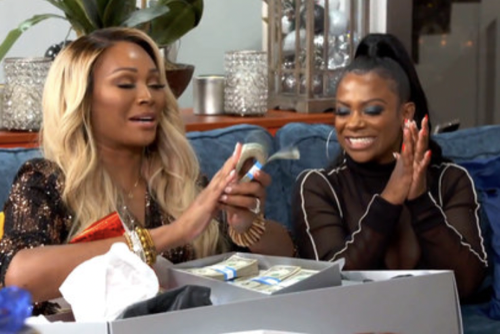 Tonight on Bravo The Real Housewives of Atlanta airs with an all-new Sunday, April 18, 2021, season 13 episode 18 and we have you The Real Housewives of Atlanta recap below. On tonight’s RHOA season 13 episode 18, as per the Bravo synopsis, “Drew and Ralph arranges a meeting between her oldest son and his biological father; with so much discord in the group, Cynthia decides to host a Friendmas event to celebrate the holidays and sisterhood.”

In tonight’s RHOA episode, Kandi accepts an award for her business in the community while Cynthia and her husband talk about buying another house. Drew gets her son Jo-Jo ready to go and visit with his biological father. They head to a cafe to meet up but Ralph, Drew’s ex isn’t answering his phone. She hopes they didn’t come all of this way for anything. Soon, Ralph shows up and everyone sits and talks. Jo-Jo is shy and very honest with his dad. Drew understands that her son hardly knows him.

Kenya meets with her therapist to discuss her and Mark’s separation. She is confused. He came to their daughter’s birthday party, slept in her bed, and now seems to be back to his usual self. She tries to call him with her therapist but it seems he has blocked her calls. She tries repeatedly. She doesn’t understand how the father of her child could do that. What if an emergency happened.

Kenya tries to contact Mark from her daughter’s cell. He finally responds, telling her he is at the hospital for a friend. Kenya calls him out. She is done. Meanwhile, Cynthia is hosting a gift exchange, Friendmas, at her house later. She tells the ladies no more than $100.00 for each gift for Christmas.

LaToya tells Cynthia she isn’t coming. Kenya and Kandi arrive. There are llamas in the driveway. They all take photos. Cynthia tells them that not only is LaToya skipping the party but Marlo too.

With some of the ladies missing and late, Kenya thinks they should start. Three hours later, Drew and Porsha arrive. Kenya rolls her eyes. She thinks Porsha is rude as she shows up late to everyone’s events. They then pull numbers for gifts. Porsha goes first. She opens her gifts, it’s a Tiffany necklace and bracelet set. Kandi is laughing because Porsha doesn’t like her gift. The rest of the gifts include an iPhone 12, diamond earrings, cash, and more.

The ladies are all annoyed, especially Kenya when Drew gives a wig and a piece of paper showing a donation to the humane society. They all think she is cheap and they do not appreciate the gag gift. Drew laughs it off. She then plays a recording for them of the prophet admitting he likes LaToya. The ladies are even more annoyed she would have her assistant record his conversation with the prophet. They learned nothing new. Kenya calls her a narc.

LaToya makes a surprise visit to the party. She and Drew argue over the recording. LaToya tells her that her husband is in Florida trying to bag a new girl, one that looks just like her. Drew makes comments back at her. LaToya starts breaking things and throwing things. Cynthia just wants them out. Kenya pulls LaToya to the car.

Since the finale, Kenya is moving on with her divorce, Porsha continues to fight for social justice. Kandi is working on her acting career while Drew makes decorating her home a focus. The ladies will see one another next at the reunion.