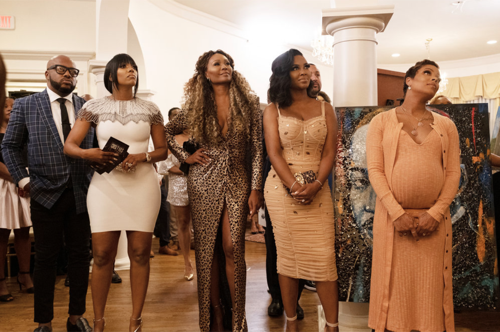 Tonight on Bravo The Real Housewives of Atlanta airs with an all-new Sunday, January 10, 2021, season 13 episode 5 called, “Don’t Come For Me Unless I’ve Invited You,” and we have your The Real Housewives of Atlanta recap below. On tonight’s RHOA season 13 episode 4, as per the Bravo synopsis, “After nearly spoiling Cynthia’s proposal last year, Kenya seeks redemption with a surprise engagement dinner. Kenya uses the opportunity to confront Porsha about being uninvited to her party and Kandi sends her daughter, Riley, off to New York University.”

At the engagement dinner venue, Monet, the event coordinator shows Cynthia around. Meanwhile, it is five days before Riley leaves for college. Kandi tells Riley she is not ready for her to go. Kandi gives her some tips for cleaning for when she is not around.

Cynthia meets Kenya and LaToya at a lingerie store. Latoya and Kenya’s flirtations are starting to get on Cynthia’s nerves. Kenya loves having LaToya around, she says she makes her feel sexy and vibrant.

Porsha is at home with her mom when Lauren arrives. Lauren asks about the gift that Kenya sent the other day. Porsha says it was a nice gesture and she will send a thank you. Then she is asked if she feels sorry for Kenya and she asks why would she! Porsha is writing a book, which is very therapeutic for her. She wants people to know that she has had to deal with abuse and depression and survived it all. Porsha talks about when her parents were divorced and it was very confusing.

She and Lauren are half sisters, and saying that as a child would get her a spanking. She says not having her father around a lot put her into abusive situations with men. Then she talks about Denis, she says he is a powerful father figure. Her mother says they were always civil for the kids. She said she stepped backward when he had Lauren, for the better. Lauren says he was consistently there for her, Porsha starts to cry. Porsha says it is not until now that she has thought about the full impact of not having her father around.

Day of Cynthia’s engagement dinner, Kenya arrives at the venue and it is all white. Because of the pandemic, the dinner is intimate. Everyone has been tested for COVID. It is a winter wonderland background. Tanya arrives, she is the first person to arrive – she says she can’t believe that Kandi is not there at her own event. Kandi and Todd are next to arrive, and Joi. Cynthia arrives next with Mike, before the rest, and it’s a disaster.

Kenya shouts surprise and both Cynthia and Mike are confused. They turn around and come in again, then they get it. Kandi announces that Kandi put on this engagement dinner for them. Kenya and Cynthia sit down together, Cynthia asks her to be one of her bridesmaids. Meanwhile, Marlo shows up twenty-four minutes late while Kandi takes the mic and sings a bit. Cynthia asks Kandi to be one of her bridesmaids. Cynthia didn’t want bridesmaids but she is getting closer to the wedding, she thinks it would be nice to have her girls beside her. And, Kenya has redeemed herself with this surprise.

Kenya is speaking to the invitees and Porsha walks in. She comes late and purposely goes around the room and gives hugs and kisses, and going on about her hair. Kenya takes the mic and pretends to sing, Kandi grabs the mic and takes over. Cynthia cannot be more grateful to Kandi and Kenya for this party. The chef comes out and tells everyone what they will be eating.

LaToya shows up an hour and twenty minutes late. Cynthia tells everyone that she asked Kenya and Kandi to be her bridesmaids. LaToya shows everyone that has a picture of Kenya from the lingerie shop, where she basically had nothing on from a side view. Porsha asks LaToya if she is going to get her butt done as well, to which Kandy tells her to shut up and this is why she should not have been invited.

Kandi sees that an argument is going to begin and tries to get the two to calm down. Kandi says they were having a really good evening and she doesn’t want to see that to end. Kenya asks Porsha if she got her gift for her child, Porsha says yes. Then Kenya says it would have been nicer had she been able to give it in person. Porsha blames it on Lauren and says she didn’t know they like each other. Kenya feels really good about the evening, and about being asked to be a bridesmaid.

It is the day that Riley is going to college, they are packing her things up and when they get there, because of COVID, they are only permitted two hours to get her moved in. Her eighteenth birthday is next week and she won’t be home. Kandi is so stressed, all she is doing is eating.