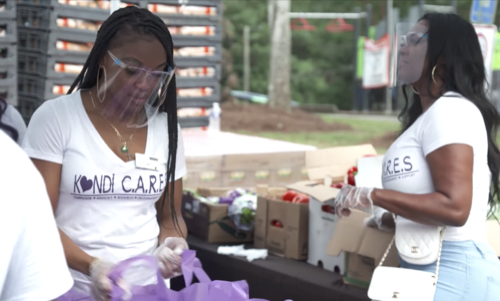 Tonight on Bravo The Real Housewives of Atlanta airs with an all-new Sunday, January 17, 2021, season 13 episode 6 called, “The Giving Peach,” and we have your The Real Housewives of Atlanta recap below. On tonight’s RHOA season 13 episode 6, as per the Bravo synopsis, “Cynthia grapples with the decision of whether to invite her father to the wedding; Kandi organizes a food drive to help provide groceries to local families in need.”

Cynthia tells Mike that they have a problem, they might just get the whole 250 people attend the wedding. Cynthia says she has all her family members confirmed, except her dad, because they are estrained. At her first wedding, her father and brother walked her down the other. But after her mom’s “Kenya’s Domestic Violence PSA” three years ago, he became really jealous and did something bad enough for Kenya to grab a knife. She hasn’t seen him in years. Although she is not close to him, she wants him to have the option to come. And if he does, there might be drama with her mom. Cynthia wants him to be there, and any issues that anyone has, she wants them to put aside for that day.

Drew and Ralph are packing up, Pastor Jeanette is there and she gives her two cents. Upstairs it sounds like the kids are jumping on the beds. They blow up balloons and let them loose outside for Ralph’s dad, and he tells her to be patient with him and love him no matter what.

Kandi is getting her makeup done, she loves that she works at home since the pandemic. She is really trying to promote KANDI C.A.R.E.S, buying groceries for families in need. Kandi’ lawyer calls, there is a request from human services for all income verifications for the last five years because we’ll be able to tell if he (her ex) was able to pay what he was supposed to pay or if there was some other issues. Either way, there is $92,000.00 outstanding. Kandi doesn’t want any money, this is child support and he should contribute.

Cynthia and Porsha meet, they talk about the engagement party. Cynthia asks her what is going on with she and Denis because Mike wants to invite him to the wedding. Porsha says she is overwhelmed and been losing herself. She says there is so much craziness outside the house, she doesn’t want any inside the house. Cynthia says she loves Denis and wants them together but if she doesn’t want him at the wedding, he won’t be invited. As of now, that is Porsha’s request.

Kandi C.A.R.E.S food drive is going well, they are serving three to four cars at time, all for single parent homes in need. Porsha has really stepped up, she is there to help and she gave five thousand dollars. Kenya is there as well to help out and she takes the opportunity to boss the other woman around. Joi is there, she says that Cynthia is late because she went to get her marriage licence that morning. Mike and Cynthia are ecstatic. Meanwhile, the women at the food drive are talking about Mike, he says he is going to invite Denis to the wedding if Porsha likes it or not. Kenya tells Porsha that she has to control herself. Families are starting to drive up. Kandi is so happy to bring joy to some of these families.

All the girls came to help and Kandi is so grateful for how it came together. The women take a break under an enclosure, Kandy brought lunch for all them. Kandi says she would love to do it again, and would need donations from them to make it happen. And, some of them were not as giving as she thought they would be the first time around. Drew calls, Kandi thanks her for her donation. Kandi says she was talking with Latoya and they agree they all need a break, she is inviting them to a getaway. She likes the idea of the mountains, water. Porsha says they would have to drive because otherwise it wouldn’t be safe. A little girls getaway on the beach. Kandi tells them to keep in mind they will have to get tested.

Cynthia has her keys, she tells Noelle to grab an umbrella in case. They are in the car driving, Cynthia asks her if she is excited to be back in Atlanta, she says yes. Cynthia tries to speak to her and all Noelle is doing is taking selfies. Cynthia tells her that she is glad that she is there, someone who she can speak to about inviting her dad to the wedding and she wants her to have her back when she tells her mother. They arrive at Cynthia’s mom, Barbara’s house. Mal is there, hugs all around for them but they are masked up.

They talk about Cynthia inviting her dad, her mom tells her that she hasn’t spoken to him since the whole PSA thing. Barbara isn’t thrilled about it and says she was the mom and the dad since Cynthia was three years old. Mal says she still has a relationship with him and she thinks he should be there. Barbara says her family had a lot to say to her after the PSA because he goes to church and all that. Barbara claims she didn’t know what PSA meant. Cynthia says she is sorry that she didn’t understand, she apologizes.