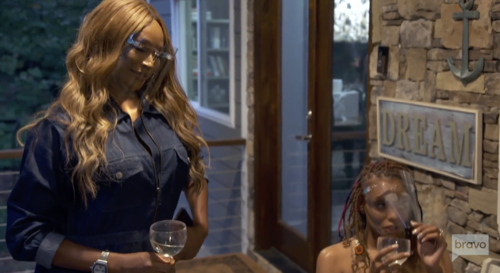 Meanwhile, more press leaks about the weekend in South Carolina have spread, leading the women to speculate who the source might be. Shamea attempts to shelter the nieces from the judgmental aunties, and Porsha and Dennis”

In tonight’s episode of The Real Housewives of Atlanta Cynthia and her daughter are getting ready for her wedding. She worries a hurricane in the forecast will ruin her big day. The day before she has all her family and friends over. She is stressed out. They thank everyone for coming. Their rehearsal dinner will be pizza.

Cynthia is also upset about some media backlash that she is having a wedding during the pandemic. Wendy Williams particularly is upsetting. Kenya arrives, they sit and drink, talking about the bad PR. Kandi arrives. They get into the page six drama about the bachelorette party. Kenya let’s rip some of the details. Cynthia just wants to end the talk.

Kandi and Kenya talk alone. Kenya wants the truth to come out. If it was her doing some things, they would throw her under the bus. Kandi just doesn’t want to shame people. Drew arrives at Shamea’s. They are having a “don’t judge me” party. Marlo arrives. They all sit and talk about the wedding and Kenya trying to rule herself out on social media as to one of the girls who slept with Bolo.

Marlo tells them she and Kenya are fine. Porsha isn’t going to regulate her friends. LaToya shows up. She strips off her shirt and puts their party shirts on. They get into some truth or dare.

The ladies get back into the night with Bolo. Drew and LaToya go at it. Drew tells her she keeps trying to call her out as sleeping with Bolo. She has a good marriage but Toya’s husband is trying to cancel her out. Toya tells them she thinks Kenya leaked the story. She also said that Toya had oral sex with Porsha. Toya thinks Kenya is just an angry person who is going through a divorce. Porsha is mad that Toya is talking about Kenya but they are friends too. She plays both sides of the fence.

Cynthia and her mom talk in the kitchen about her big day. Her dad didn’t come because of the pandemic. All of the ladies get ready at their house. Porsha is annoyed that Dennis will be there. Cynthia heads to her wedding with her wedding party. The crew is unable to capture some of her weddings due to covid.

Drew calls Cynthia. She has lost her voice and cannot sing. She will be at the wedding though. Cynthia takes it in stride. She is a lot calmer today. This all feels right. She loves Mike and recalls her first wedding when she had extreme anxiety.

Kandi is so happy her friend is getting her happily ever after. Drew wants to have her now wedding again and do it right. The wedding starts. The bridal party makes there way out. Cynthia appears in her jeweled dress. She and Mike share their vows. Cynthia is the happiest she has ever been.

On to the after-party, the ladies all congratulate Cynthia. A few days later, Porsha and her ex-fiancé meet for dinner. They talk about their break-up. She thinks they need to stop rehashing things and just move on. If they never had a baby they wouldn’t even be talking. She just wants their romantic relationships to heal.