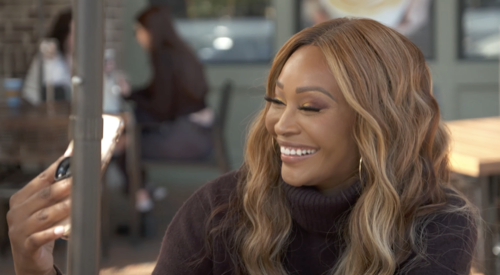 Tonight on Bravo The Real Housewives of Atlanta airs with an all-new Sunday, March 14, 2021, season 13 episode 14 and we have you The Real Housewives of Atlanta recap below. On tonight’s RHOA season 13 episode 14, as per the Bravo synopsis, “Cynthia Bailey Is “Kenya learns that LaToya is gossiping, causing her to second guess their friendship; Drew juggles a girls trip to NOLA and reconnecting her son with his biological father; tensions boil over when the ladies attend Fallyn’s Halloween party.”

In tonight’s episode of RHOA, Kenya goes to support Marlo’s fashion endeavors with her clothing rental, sales showroom. They sit and talk. Marlo shares how LaToya talked about her and Mark’s divorce. Kenya is not happy. Meanwhile, Drew is with her mom. She tells her how she is headed to New Orleans for work and a girl’s trip.

Drew hopes to also learn more about her family who is from there. Her mom discusses living there in her younger years and the racism she experienced. They get into her adoption as well as blood relatives.

Kandi has an upcoming movie role so she is up at 5 am with her trainer. She wants to get her body back. Cynthia and Mike head to breakfast. They talk about their wedding and how special it was. They talk about buying a house in Atlanta. She doesn’t care where they live as long as they are together. Drew calls to invite her to New Orleans. Mike is fine with her going as long as Bolo isn’t there, he jokes.

Drew and the adults of her family try to talk to her son Jo-Jo about working on a relationship with his biological dad. After being in jail, his dad is out. Drew tries to see how comforting her son is with getting to know him but Jo-Jo shoots her down every step of the way. He doesn’t care if he sees him or if they have a relationship.

Cynthia arrives at Falynn’s Halloween party. The place is decorated and very scary. Kandi shows up as a cheetah. Falynn is Medusa while Cynthia is hand sanitizer. Kenya is a Native American Indian. Drew is irritated by this. LaToya shows up and instantly is looking for a drink. She wants to know where the help or a maid is. Falynn is annoyed. Kandi thinks she is crazy.

They all get up to drink. Latoya jokes with Kenya about where she has been. After a toast to Kandi’s movie role and more, Kenya gets Latoya alone about the divorce. Latoya blames it all on Porsha, telling her she had to defend her. Kenya is annoyed and doesn’t like when LaToya raises her voice.

Shamea arrives and talks with the other girls while Kenya and LaToya argue. Kenya gets up and leaves while Falynn tells the others she is annoyed with LaToya for saying something about dating an older man and him buying her this house. Latoya tells them she is leaving. She asks Kenya to walk her out but she doesn’t want to. Porsha offers. They talk outside. Porsha is confused by her behavior.

Inside, Kenya tells them she is heading home. When she gets outside she runs into the rest of them. Falynn starts to fight with LaToya, calling her a ho and commenting on her house. Falynn has had enough and attempts to fight with her. The show’s producers stop her. The party is over. Drew thinks LaToya’s drinking has become too much.