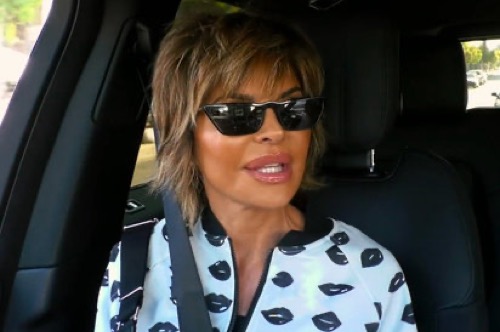 Tonight on Bravo The Real Housewives of Beverly Hills airs with an all-new Wednesday, June 30, 2021, season 11 episode 7 called “Defining Women,” and we have your RHOBH recap below. On The Real Housewives of Beverly Hills season, 11 episode 6 as per the Bravo synopsis, “With rumors swirling about her divorce, Erika reveals new details about why she left her husband. A group outing on the town goes up in flames when Kathy unintentionally reignites a dying spark.

Meanwhile, Lisa Rinna confronts tabloid rumors of her own, Dorit adds a special piece of art to her collection, and Garcelle’s son has strong thoughts about her love life.”

In tonight’s RHOBH episode, Erika left her husband. She took him to work that morning and then she returned home to pack her bags. She didn’t leave a note. She didn’t even call Tom to tell him she was leaving. She just left. She left and she knows this divorce is going to be hard. It’s her ex’s third divorce. Tom was also rude and dismissive.

He wasn’t going to let Erika have a single thing without a fight. She knew this and she was gearing up for it. She and Sutton had a spa day. Sutton rented the whole spa so that they could walk around without masks and simply enjoy themselves. Erika had fun. She de-stress and she talked with Sutton. Sutton asked if “Chicago” was what broke the camel’s back. Erika had been a lead in the Broadway play “Chicago” and her husband never once came to see her in action.

Tom has funded her lifestyle. He funded her career as a singer and performer and yet he couldn’t show up when she was finally standing on her own two feet. He’s not showing like that had helped put things in perspective. Erika realized that her career never mattered to him and that’s when she started to distance herself from him.

Sutton knows what it’s like to be married to a powerful man. She also knows what it’s like to divorce a powerful man and it was going to drag on for a while before anything could be resolved. Erika went from her spa day to a gossip trip to Garcelle’s new place. The two women discussed the latest gossip and it’s been going around that Tom has been seen out with a blonde woman.

Erika has been hearing that one for a while. She’s not sure if it’s true or not and so they moved on to the next bit of gossip. Erika has been contacted by two men in the media. She denies it. She said she hadn’t seen either guy in the last four years and so she was still laughing about that when she went driving with Lisa. Lisa also shared her news. Her daughter is dating Scott Disick. Lisa asked her daughter about Scott back when they on Lake Como and her daughter swore they were just friends. Now, she’s saying differently. Amelia is nineteen and Scott is thirty-seven with three kids. He has lived a life. He was also old enough to be her father and so Lisa didn’t like the idea of her daughter dating this man.

The only good thing Lisa could glean from it is that no one is talking about Amelia’s eating disorder now. Other than that, she doesn’t approve. She won’t say anything because she knows that she can make it worse and so now she’s not saying anything to her daughter about it. She won’t let her daughter know that she doesn’t like this relationship. She doesn’t approve of this relationship. She just going to go through the motions of riding this relationship out because she suspects her daughter will come to her senses before she does stupid like marrying him. Lisa and the other ladies gathered together to celebrate the holidays. The Christmas season was upon them. They all did some Christmas shopping and they got into the festive mood.

One of Kyle’s older daughters was in town from college. She had to self-quarantine before the family could hug her but the waiting was worth it because they missed seeing her and she was especially close with her youngest sister. Portia broke down in tears when she saw her. She also broke down in tears when they dropped her off at college. Portia doesn’t really show her emotions. She’s becoming a jaded teenager who freaking out about learning Hebrew for bah mitzvah and so having her sister around reminded everyone that she’s still a kid. A kid who could become excitable and who loves her family. Kyle was riding the wave of having her family together when she met up with the girls. And then drama happened.

It didn’t happen right away. It happened after the women were in such a great mood. Lisa shared her news and her friends came to believe that this might be good for her. Garcelle’s son Franklin has been so lost. He struggled with drugs and then one day he called his mom to tell her he met a woman with three kids. The girlfriend was also pregnant again. Garcelle originally thought her son had ruined his life and instead he found peace. He was happy. Garcelle became a grandmother and now Lisa could do the same. Lisa could become a grandma to Scott’s three kids if his relationship with Amelia progresses. The ladies also started laughing about everything when someone mentioned Sutton’s new nickname. Her new nickname is “Peeping Thomasina”.

She was called that because of what happened with Crystal. Crystal still claims she felt violated and they tried to get her to walk that back, but she refuses to do so. She didn’t see the sexual connotations with the world “violated” and she changed her story. She first implied that Sutton tried to shame her and she called Sutton creepy. Now she’s saying that Sutton just embarrassed her or at least that’s how she explains the world violated. Sutton asked her to use a different word because of the cancel culture and Crystal refuses to do so. She still says violated applies to what happened.