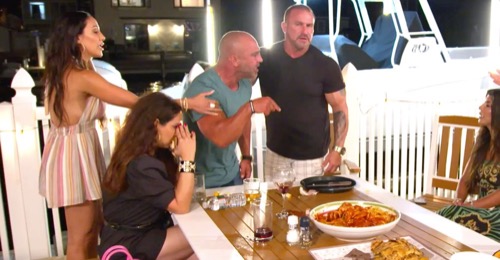 On Bravo TV tonight The Real Housewives Of New Jersey (RHONJ) airs with an all-new Wednesday, March 31, 2021, episode, and we have your RHONJ recap down below!  On tonight’s RHONJ Season 11 episode 7 called, “Old Feuds Never Die,” as per the Bravo synopsis, “A fight between Melissa and Teresa sends Joe Gorga over the edge. When Evan heads down the shore to confront Teresa, Jackie threatens to head home.”

In tonight’s RHONJ Melissa cleans up her foyer after she threw up in Bill’s car and the entryway of their home. She really is never drunk like that. At Dolores’, Gabby arrives home with all of her dogs. She is home to see her mom receive a hope award. Little Frank and Dolores’ ex are also there. They all eat and laugh in the kitchen.

Teresa and the girls hang out while she cooks. They call Joe. He tells them all about his new massager ideas. They talk about her selling the house. Teresa also shares that she plans to celebrate her dad with some type of event. Joe knows she will throw a nice party.

At David’s, Dolores’ chef makes a great meal as the guests arrive. David stops home and then leaves. He has to work. Jennifer doesn’t get it. Jackie arrives. They tell her Teresa isn’t coming. Dolores wishes they just got along. Jennifer is offered a drink and only wants ice water after the other day.

The ladies ask Dolores why she doesn’t live here in David’s house. She shares that she likes her freedom. They move on to see her award before they ask to see the house. Dolores takes them on a tour. Melissa asks her how much sex she has with David. Dolores tells her plenty. They move to talk about celebrating Melissa’s father-in-law. It will be a two-day event. Jackie plans to stay with Melissa. Evan will come for one night. Jackie doesn’t want trouble with Teresa.

All of the ladies pack to go to the shore for the celebration of Teresa’s dad. Jackie shows up at Margaret’s. They plan to ride together. Teresa and Jennifer ride with Dolores and her ex. Teresa shares that today her divorce papers will be filed. She is a little sad but hopes she and Joe both end up happy. Jenn shares that Bill told her Joe B. was not surprised about the rumor Evan had a girl on the side. He heard the same thing. Teresa laughs. This validates what she said.

Melissa and Joe arrive at their shore house. Meanwhile, Teresa, Jennifer, and Dolores arrive at her house with her ex. He unpacks the car. Teresa gets a call while the ladies all cook. A potential buyer wants to see her house. She is freaking out. She cries a little. Jenn cannot believe all she has been through and how strong she is.

Melissa, Jackie, Margaret, and the guys arrive at Dolores’. Teresa comes downstairs and brings gift bags. She gives them to the ladies. They open their gifts to find vibrators. She has given them all one. She makes a joke to Jackie about sticking it up her as$. Joe’s eyes bulge out of his head.

Teresa goes inside to help with food. The ladies all check on Jackie. She tells them she is fine. They all sit for dinner. They talk about how Teresa is selling her home and her divorce is final. She shares she is a little sad. She thens looks at Joe and says that her ex has always been a class act. Margaret hates that Teresa is so crazy and angry. Teressa then brings up the Evan drama, throwing Joe. B under the bus. He denies it. The table erupts into a fight. Jackie calls out Teresa for treating people bad. Teresa says she just likes confident people. Jackie brings up her time in jail. Teresa gets up and leaves, calling Jackie a nasty b&tch.