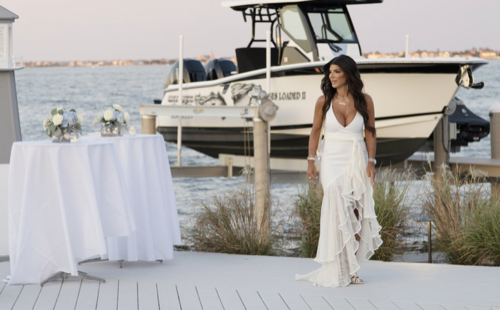 On Bravo TV tonight The Real Housewives Of New Jersey (RHONJ) airs with an all-new Wednesday, April 14, 2021, episode, and we have your RHONJ recap down below!  On tonight’s RHONJ Season 11 episode 9 called, “Pineapple Puss,” as per the Bravo synopsis, “A psychic unveils Dolores’ health crisis, Melissa’s marital issues, and secrets about Teresa’s dating life.”

In tonight’s RHONJ episode, Jennifer, her mom, and her daughter look at photos of the new baby in the family. Her dad went to meet her nephew in Turkey. Her mom didn’t go. She is still fighting with her husband. This brings up her anger at him, their past, and how she was forced to marry him. Jennifer remembers her father as a gentle soul. She just wants her mom to be happy and forget about the past.

Jackie, Melissa, and Margaret meet for lunch. They talk about their kids and being in school remotely. Margaret doesn’t have kids in school, thankfully. They get into Melissa and Joe arguing more as she wants to do what she wants now. They plan to talk to a psychic. They talk about how Teresa has seen a psychic since getting out of jail several times.

Dolores has scheduled a biopsy after getting a mammogram. The doctor saw something on there and now she needs to be checked further. Frank comes over. She tells him about it but admits she hasn’t told her mom. He tells her to take care of herself and rolls his eyes when she shares that David thinks she will be just fine.

Teresa cleans the kitchen as she gets ready to have the ladies over so they can all meet with a psychic. Margaret tells Joe she hopes they find out if Teresa is getting some. She has been extra sexual lately. She is also embarrassing for Melissa for posting on social media that she needs a live-in housekeeper.

All of the ladies show up at Teresa’s. Jackie has never been there. She likes it. Margaret arrives before Teresa’s realtor. Margaret immediately makes fun of Melissa and her need for a housekeeper. When Melissa arrives, Margaret pokes fun at her while all of the ladies tell her she looks like she has lost weight. She tells them she has been slaving away at her house like Cinderella.

The ladies get right into the psychic and her reading. She discusses a little bit about each of their family members that have passed on. She tells Dolores she is in a dead-end relationship. Dolores doesn’t cry until she talks about her dog Boo who has passed. Melissa is in shock that the dog upset Dolores more than the dead-end relationship.

The psychic then tells Melissa her dad is by her side. Her dad acknowledges her son. Melissa wonders if she is doing anything wrong in her life. She is told she is going in the right direction.

It’s Jackie’s turn. She is told her grandmother is with her and proud. Melissa is told to support her mother as her ancestors need her to. During Teresa’s turn, it is revealed that there is love around her. The ladies laugh. They know she is secretly dating someone.

Jackie has her parents and brother over for Rosh Hashanah. She tells them about the psychic. She is choosing to believe it. Meanwhile, Melissa and Joe head out for dinner. They talk about Melissa talking to their daughter about sex. Joe looks sick. They talk about her work. He tells her not to let it consume her life. He doesn’t want to lose her. She tells him life is changing but she is still here.

Melissa and her parents are cooking breaks when they fight. Bill comes home and tries to help resolve the issues. They all separate and Melissa tries to talk to her mom.