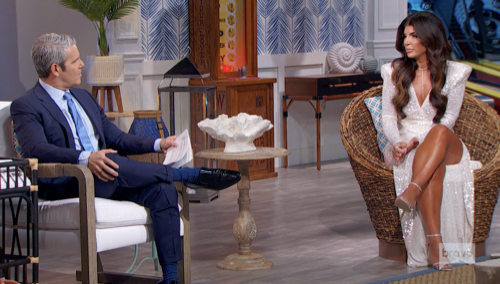 On Bravo TV tonight The Real Housewives Of New Jersey (RHONJ) airs with an all-new Wednesday, May 26, 2021, episode, and we have your RHONJ recap down below!  On tonight’s RHONJ Season 11 episode 15 called, “Reunion Part 2,” as per the Bravo synopsis, “Joe Giudice Says Seeing Teresa Giudice With Someone Else Broke His Heart Into a Million Pieces. Teresa reveals what it was like when her ex-husband Joe and her boyfriend, Luis “Louie” Ruelas met each other for the first time.”

Tonight’s episode is going to be filled with more crazy housewife drama that you won’t want to miss, so be sure to tune in for our coverage of the show tonight at 9 PM – 10 PM ET! While you wait for us The Real Housewives of New Jersey recap head over, and check out all our news, spoilers, and more about the RHONJ!

In tonight’s RHONJ episode, right out of the gate they all discuss Jen and being a sloppy drunk. Theresa thinks it was fine. Margaret thinks Jen is out of control. A fan then asks about Margaret sleeping with her boss. Jen didn’t deem it as sexual harassment. Theresa laughs at it. She wouldn’t let that happen while Jenn slut shames. The other ladies get mad.

The reunion turns to Margaret and how she called Theresa the exorcist. They then veer off into Dolores and her plastic surgery. She has had work done twice and lied to David. Her life looks good on the outside but she and David have a strange relationship. Margaret and Jenn both agree she isn’t getting what she needs from him. It is strange she is so close to Frank still, renovating her house and still with David who bought them a house. If he did ask her to marry, she would marry him with stipulations.

It’s on to Theresa. She admits she had her lips done and is ready to talk about her new love. They have been dating for 10 months and are in love. Melissa shares that she and Joe love him. He is very personable. He and Theresa even sat and had dinner with Theresa’s ex, Joe. It went well but after Joe shared on social media that his heart was broken. Her kids are doing all right. They are in therapy.

The ladies get into the season and how Louie, Theresa’s new love, liked it. This brings up her feud with Jackie who then shares Theresa’s apology wasn’t even sincere.

The reunion invites all of the ladies’ significant others on. Andy asks Evan about how he liked this season. He made it through, he shares. Even after Theresa called him a cheater. Andy then shows some of the highlights from this season; their eating, playing games, and talking about the ladies. Frank kissing Joe’s butt was a highlight after losing at golf. They touch on Franks’ accident and how David cared for him.

Andy gets into some of the other highlights from fans. Dolores and Frank are still seen as a power couple; Evan living in Argentina; Melissa getting jealous over the realtor calling Joe. The Jackie/Evan cheating saga gets brought up again. Joe B. says he heard it in his house. Margaret brings up how Jen started this whole fight all over by saying Joe knew too.

Andy then discusses the feud further how the fight infected the entire season and couldn’t be put to bed. It actually caused a number of fights. Fans ask further why Theresa didn’t just go to Jackie. It looks as if she wanted to ruin their marriage. Jackie brings up Theresa going to jail again. This gets them into another fight.

They get into Jackie’s analogy of spreading a rumor about Theresa’s daughter doing cocaine. All of the ladies get into an uproar, fighting about whether it was said as an analogy or not. Jackie gets right back to the start of it all. What Theresa did was wrong and Joe agrees. Theresa apologizes and asks Evan and Jackie to go golfing with her and Louie.

The men leave. The ladies all have pineapple drinks. Louie comes out. Theresa is thrilled. She hugs him. They discuss their loving relationship. They toast a fresh start.