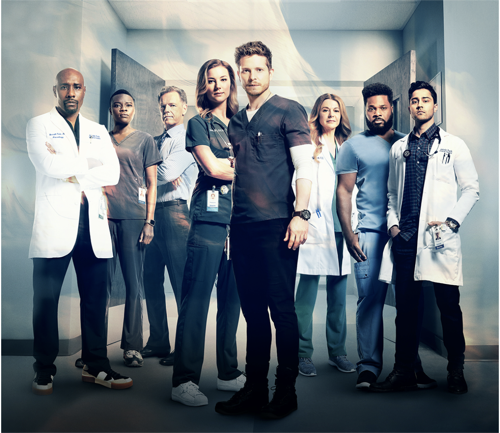 Tonight on FOX their new medical drama The Resident airs with an all-new Tuesday, January 12, 2020, episode and we have your The Resident recap below.  On tonight’s The Resident season 4 episode 1, “A Wedding, A Funeral”  as per the FOX synopsis, “After a long wait, Conrad and Nic prepare for their wedding day with the support of their family and friends.

Meanwhile, flashbacks to the early days of the COVID-19 crisis shine a light on the heroism of the doctors and the toll the virus took on everyone at Chastain Memorial.”

Sometime in the future, when the COVID-19 pandemic is history: Conrad is getting dressed for his wedding, he has no last-minute jitters and he is as happy as he has ever been. Meanwhile, Nic is getting ready, Mina is with her assisting her to get her ready in her mother’s 1980’s wedding dress. Nic asks Mina if it is bad to be this happy after everything that has happened.

March 2, 2020, Nic and Conrad are discussing the details for the wedding and walking down the street together. Conrad walks into the hospital, Devon asks him for a quick consult. The patient has lesions on his fingers, temperature, and says he can’t smell. Conrad thinks it is COVID-19, their first case, the symptoms match. All of a sudden, the patient goes into cardiac arrest.

April 5, 2020, there are COVID-19 tents outside the hospital. Nic gets a text, they can’t refund for the wedding. The two arrive at the hospital, in masks, their temperature is taken. Nurse Ellen is at home, she has come down with the virus, she is the one who took care of the first patient who was infected.

We see another patient, who is in critical condition. His family is on a video screen, many of them, paying their last respects before he passes away.

Nurse Ellen drives up to the hospital, she gets out of her car and passes out on the street in front. They have Ellen inside, she has a high fever. Her daughter arrives and she is frantic, she begs for them to get her out of there, she doesn’t want her infected. Nic goes to speak to her daughter and asks her to leave, no visitors are permitted in the hospital.

Kim gives the doctor a hard time, they need money to cover payroll. He tells Dr. Cain to schedule elective surgeries as urgent as soon as possible. Cain says ok, but warns him not to threaten his job again. Dr. Cain calls a patient who needs back surgery, he tells him that he needs to get him into the OR as soon as possible. The patient is worried about coronavirus, Dr. Cain assures him that he will be safe. The patient gives in and says he will do whatever he says.

At the hospital, tensions are mounting, a man pulls down his mask and spits on one of the workers. Then, AJ tells Barrett that he is booking surgeries that are not urgent and he is putting the patient’s life at risk.

Nurse Ellen is talking to her daughter on Facetime, she assures her that she is going to be ok and tells her that she loves her. Meanwhile, Ellen is having a hard time breathing. They have to put a ventilator in, she knows that she may never wake up again. Kit is out of the room, she is upset, she had two masks on, but one broke when she was in the room with nurse Ellen. Conrad goes to see Kim and tells him that he is putting the staff at risk with poor equipment.

Ellen is upset, the team is with her, they are going to put her to sleep. Nic tells her that she is going to pull through and wake up from this.

Conrad offers Nic some food, she doesn’t want to eat. Nic is so upset that she may have to tell Ellen’s daughter that she may never see her mom again, and she is around the same age as Nic was when she lost her mother. Conrad tells Nic that Kit was exposed, he told her to go home, she is scared.

Conrad is in the shipping area, Kim got some masks delivered from Korea, he got Redrock to pay for them. And when they find out, Kim could lose his job but this way, his staff will be protected and he will be able to sleep at night.

Outside the hospital, people are gathered to cheer on the medical staff when they leave their shifts to support and encourage them for what they are doing. Devon calls his dad, he sounds sick, coughing. Meanwhile, nurse Ellen is on the ventilator. Kit is at home, she has a fever. She calls Randolph and tells him that she has a fever, he will have to cover her patients.

Back in the present day, Conrad is dressed for his wedding. Devon is with him, but he has to leave, he is flying out to see his mother.

Time for the wedding, Nic is coming down the aisle, Conrad is waiting for her at the alter. Nic says they first want to mention some friends who they lost from COVID: George, Dr. Peterson, Peter, Lois, and Devon who lost his father to COVID and almost lost his mother. Conrad thanks his dad for stepping in as his best man. Nic tells Conrad that during tough times, she wants him by her side. He says no matter what. They exchange rings, the two are married.

AJ tells Mina that he broke up with Andrea, because she deserves someone that looks at her the way Conrad looks at Nic, and he says she was just a filler for Mina. Mina looks at him, then kisses him.

Devon is in the airplane, he is watching a video of his last conversation with his dad when he told him to fight and that he could recover if he fights. His dad told him that he was proud of him and then he fades out.