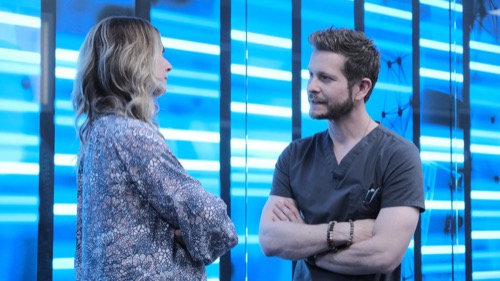 Tonight on FOX their new medical drama The Resident airs with an all-new Tuesday, March 2, 2021, episode and we have your The Resident recap below.  On tonight’s The Resident season 4 episode 7, “Hero Moments”  as per the FOX synopsis, “Conrad must help his former Army commander who is stranded and wounded in the forest; Devon and Kit treat a patient who suffers from sickle cell anemia.

Bell works on reconnecting with his stepson after helping him get hired at the hospital.”

The Resident season 4 episode 6 air at 8 PM – 9 PM ET on FOX. Make sure to bookmark this spot and come back for our The Resident recap! While you wait for the recap make sure to check out all our television recaps, news, spoilers & more!

In tonight’s The Resident episode, Conrad is getting dressed, Nic tells him that when the baby comes there will be no more peace, they should enjoy it while it lasts. Conrad’s phone is ringing, it is his former army commander, he asks Conrad if he still does search and rescue because he is stranded and wounded on the ledge. Conrad is getting ready, he tells Nic that he has to go. Meanwhile, Barrett is in raspatory distress.

AJ and Mina are enjoying a coffee, he tells her to stop stressing about her immigration status.

Devon is treating Ms. Williams; she has hip pain from sickle cell anemia. He tells her that he sees she has been to five ER’s in the past month. She tells him that the pain is excruciating, she just wants pain killers. She says her hip feels like it is on fire, even when she doesn’t move. When she does move, it feels like shards of glass in her hip. He tells her he will give her what she needs if she allows him to take an x-ray of the hip, she agrees.

Conrad is in the forest; he finds his former commander who has a deep gash in his side. Conrad tells him that he is bleeding internally, he tells him he is going to try and buy him more time. Conrad calls her and says he found him, and they are going to airlift him to Chastain. He tells her to page Austin; he wants him to meet him in the ER.

Kitt is with Barrett, she tells him he is doing quite well for someone who just came off a ventilator. Then she goes on to tell him that he will be lucky if he gets 50% of the feeling back in his hand, he has a lot of PT ahead of him and he needs to be patient. He tells her that he wants to speak to the new CEO, she tells him he just did.

Austin and Mina are in surgery, they are doing a valve replacement. Kit and Devon speak to Ms. Williams and tell her that pain management and PT are not going to cut it, she needs to have a hip replacement. She says she is not doing the surgery; the risk is too high.

She had to stop dancing because of the pain, she tells him that the girls in her dance group are her life and she wants to be there with them. Devon says he wants to do the surgery right away, it is the best thing for her, and they will do everything they can to keep her safe.

Austin aka The Raptor gets a call and has to leave the surgery with Mina to help Conrad’s commander with the stomach wound. Mina looks nervous, he tells her she got this.

Conrad looks at his commander’s x-ray and he tells Nic that it shouldn’t be clear, there should be a bullet next to his spine and there isn’t.

Conrad speaks to Nic about what happened in the army, his commander ordered them to pull back, but he knew one was behind and he went to get him, but he was dead. When he tried to return to his company, he got blindsided by an explosion; dislocated shoulder, broken knee, shrapnel in his neck, he thought that was it.

But then, his commander showed up and saved his life and that is when he got shot in the chest, but he kept going. Doctors got two of the bullets out, but the third was lodged in his spine and it was too dangerous to remove and wasn’t giving him any trouble, and now it is gone. Conrad said he disobeyed an order and could have cost his commander’s life, he was ashamed.

Mina gets a call, Austin cannot return to the OR with her. He took care of Conrad’s commander but an aorta rupture came in that he has to take care of. He tells her that she’s got this and can complete the surgery on her own.

Ms. Williams is in surgery, there is a problem, but she settles and Kit can continue the surgery. Austin goes to see Conrad, he tells him that his commander is fine, but there was no bullet.

Randolph is in the cafeteria, he introduces himself to Greg, Jake’s husband. He tells him that if they need anything he is there. Greg tells him that he has to stay out of his relationship with Jake, it is there’s to figure out, but he is rooting for him.

Devon is visiting Ms. Williams in the recovery room, her hip is good but her body had a dangerous reaction to the blood they gave her in surgery, she is severely anemic and they don’t have compatible blood to give her for now.

Jake tells Kit that he changes his mind, he can’t work under the same roof as Bell. She tells him that Randolph is a good man, people can change and maybe he could give him a second chance he might surprise him.

The Red Cross has a blood match for Rose Williams, Devon is still upset, he thinks this is his fault because he talked her into the hip surgery. Devon is called to her room, she is having tachycardia. He tells her to hold on, her blood just arrived at Chastain.

Conrad is with his commander, he asks him about the bullet, he says they never got it out. Conrad goes to get Austin. Nic tells him that the bullet may have migrated to another part of his body. The commander starts to get pain in his face, Conrad takes x-rays, they find the bullet, it is in his neck and it could go to his brain and cause a massive stroke – they take him into surgery.

Conrad is sitting with his commander who is awake and well from surgery. He tells him he is good, he has his bullet, he asked Austin to save it for him. He tells Conrad to throw the bullet away and all the guilt and shame, and anything else he was holding on to.

Randolph is in his office when he sees Jake in the hallway, he says Kit had a good word for him. Then he tells him that he and his husband are going to adopt and he doesn’t want to become a loving grandpa and pull another vanishing act. Randolph tells him that he is not going anywhere.

Randolph tells Kit that he scored a coffee date with his former step-son and thanks her.

Rose Williams is feeling great, Devon takes her in the wheelchair, he tells her that he has a surprise for her, it is her dance crew, she couldn’t make the recital, so they brought the recital to her. Meanwhile, Mina is in the OR, taking a deep breath when Austin comes in and tells her that she is basking in her own surgical glory. He tells her that she doesn’t need a co-pilot anymore, she is able to fly solo.

Conrad is alone in the kitchen, he takes out the bullet and throws it in the garbage.