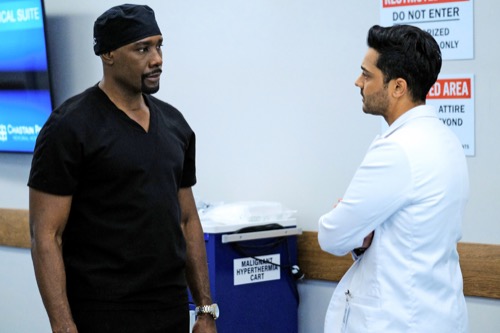 Tonight on FOX their new medical drama The Resident airs with an all-new Tuesday, May 4, 2021, episode and we have your The Resident recap below.  On tonight’s The Resident season 4 episode 12, “Hope in the Unseen”  as per the FOX synopsis, “With Nic’s due date steadily approaching, she and Conrad plan a relaxing day off, but their plans are interrupted when a patient with a medical mystery sends them rushing back to Chastain.

Devon stays by Rose’s (guest star Cara Ricketts) side as she starts her clinical trial and things take a turn for the worse. Meanwhile, Kit is under pressure to bring Chastain out of debt.”

The Resident season 4 episode 10 air at 8 PM – 9 PM ET on FOX. Make sure to bookmark this spot and come back for our The Resident recap! While you wait for the recap make sure to check out all our television recaps, news, spoilers & more!

In tonight’s episode of The Resident, the episode begins with Conrad finishing his shift and he wants to spend the day with Nic. Just as they are leaving the hospital, Nic finds out that Pete Goldense has canceled his appointment for the third time and won’t speak to anyone but here. Conrad looks at Nic and says, don’t. Meanwhile, Kit is under pressure as CEO to bring Chastain out of debt, she needs to find millions and they are getting pressured by the state to have big solutions in two weeks.

AJ shows Randolph his mother’s x-rays, her cancer is really aggressive, and she is afraid of chemo. Elsewhere in the hospital, Devon goes to see Rose, he has a bag of healthy red blood cells, she says she can’t believe she has this chance. He asks her if there is anyone, she wants to call for this big moment, she says no. He tells her that she has gone through a lot to get to this moment, she says she wouldn’t be there without him. Rose presses start on the machine, she does the honors.

Billie confronts Barrett, she is upset that he recommended her to another doctor. She says she doesn’t want to transfer; she wants to work with the best.

Conrad and Nic drop by to see Pete, she tells him that she worried that he missed his appointment. Conrad offers to do a quick check, so he doesn’t have to go to the hospital. Pete says he hasn’t been out of the house for a year, he sees no one. He tells them they don’t know real freedom until they lock their door.

Conrad is worried that Pete is short of breath. Nic goes to the kitchen to get him a glass of water and notices that the fridge is close to empty. Conrad listens to his chest and doesn’t like what he hears, he tells Pete he has to go to Chastain after all. Just then, Pete passes out and hits the floor, Conrad tells Nic to call 911.

AJ is in surgery, he is really tense and not in a good mood, he is missing Mina. AJ makes Leela so nervous that she cuts an artery in error. Later Leela goes into the supply room and screams into a pillow. Kitt finds her and tells her that AJ’s reaction was not because of her, he is going through a personal thing. Kitt tells her that she will get her in with another surgeon.

Rose has a fever, she tells Devon that she is tired and hot, but it doesn’t hurt anywhere. He tells her they are going to give her fluids and take some blood. She says when she pressed the button, she had hope and hasn’t had that in a long time, she doesn’t want to lose it.

Pete is coming into the emergency on a stretcher, Conrad and Nic are with him. Conrad orders an x-ray stat to see what is going on with him, in the meantime, he does an ultrasound on him. Conrad says he is bleeding into his abdomen, this is what happens when you are on blood thinners and not monitored.

Rose’s blood pressure is dropping, they are supporting her through it and hope that she improves soon. Meanwhile, AJ is with his parents and his mother’s doctor who tells her that Carol’s cancer has a mutation that qualifies her for target therapy. Carol wants to know what this means for her, the doctor tells her that they are buying time and hopefully by then they have newer and even better treatments.

Randolph is examining Pete, he is bleeding out they have to get him to the OR. Kitt asks Randolph if he will allow Leela on his surgical team, he says yes and Leela is thrilled. Elsewhere, Rose is having trouble breathing. Devon is there and tries to calm her down. Devon thinks she has an infection in her gut, nothing to do with the treatment. Devon puts Rose on antibiotics, after examination, Kitt says Rose is going to have to be on dialysis if she is going to make it through this treatment.

Barrett is in surgery, the patient is in distress, Barrett needs to pull it together or this is going to be the last brain he touches.

Leela is in surgery with Randolph, they are operating on Pete. He instructs her what to do, he tells her that he is right there., he knows she can do it. She does it and Randolph tells her well done. Meanwhile, Conrad can’t figure out what the underlining cause is with Pete. Nic tells him that when she went into Pete’s kitchen, he only had rice and beans, maybe he is suffering from a vitamin deficiency.

Devon tells Rose about the dialysis, her kidneys are failing, but he thinks it is only temporary. He tells her that if her kidneys don’t recover, she will be on dialysis for the rest of her life. Rose starts crying and says she has nothing left, she has no fight left. She tells him to call hospice, she is done, she can’t do this anymore.

Nic tells Pete what the cause was of his condition, a lack of vitamin c.

Carol’s new meds have just arrived, her doctor tells her once a day. AJ is happy, he smiles at his mother. AJ’s father thanks Dr. Oliver and AJ. AJ leaves and meets Randolph in the elevator who tells him that Leela did well today and he would like to keep her, AJ says ok.

Devon sees Barrett and tells him that Rose is refusing dialysis, she doesn’t want to fight anymore, he wants him to speak to her. Barrett heads right to her room, he arrives as she is refusing treatment. She looks at Barrett and tells him not to bother. She says there is a limit to what a person can endure, and she has found it. Barrett tells her that after his accident, he was hopeless and alone, he wanted to die too, but he is glad that he didn’t and he doesn’t want her to die.

She says there is no guarantee, she can’t. Barrett tells her she can, he holds her hand and tells her that he believes in her, she is the strongest person he knows. He promises her, if nothing works, he won’t let her suffer, he promises. Rose is crying, she says ok. Devon is outside the room and he looks happy that Barrett got through to her.

AJ goes to see Leela while she is practicing surgery techniques. She tells him that constructive criticism works with her, not verbal abuse. He apologizes to her and asks her if she will join him in surgery in the morning.

Kitt brings Phillip, the owner of the sickle cell trial, in to see Marshall. They offer to have Chastain invest in Phillip’s company, with enough cash they believe he can do more.

Conrad does a homemade spa evening for Nic because she missed her spa day.