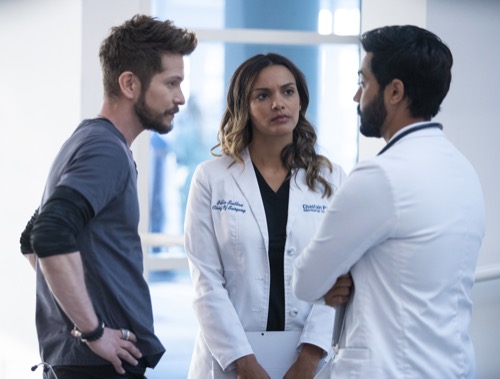 Tonight on FOX their new medical drama The Resident airs with an all-new Tuesday, November 23, 2021, episode and we have your The Resident recap below.  On tonight’s The Resident season 5 episode 8, “Old Dogs, New Tricks”  as per the FOX synopsis, “Kit hires a surgical coach to watch over Bell and Raptor and help them brush up on their skills.

Upon receiving attention from multiple women at the hospital, Conrad contemplates jumping back into the dating scene. Meanwhile, Devon works with an elderly couple.”

The Resident season 5 episode 7 air at 8 PM – 9 PM ET on FOX. Make sure to bookmark this spot and come back for our The Resident recap! While you wait for the recap make sure to check out all our television recaps, news, spoilers & more!

In tonight’s The Resident episode, AJ and Bell are in surgery talking about how either of them are Chief of Surgery. They joke they are the kings of the surgery when their patient starts bleeding, they stop it quickly. Kit sees this though and wants to see them.

Devon meets and older couple in the ED. The man has fallen again at home. Devon sees his wife looking distraught and tired. She tells him she cannot do it anymore. Meanwhile, Conrad runs into a nurse at work who is very involved in him and invites GiGi to the nurses station.

Kit introduces AJ and Bell to a surgical coach. They are insulted. Kit doesn’t care. Devon meets with the older couple again. George has no appetite and his wife is tired. Devon thinks they need outside help. They need a social worker.

Conrad escapes the over zealous nurse and takes GiGi with him to assess a young woman who fell. She seems fine, he tells her. Soon another nurse brings cookies to GiGi while hitting on Conrad.

Winston the social worker asks Devon to come up with a reason to admit George. Devon doesn’t see anything but with a push from Conrad they decide he needs a CT of the head.

Bell and AJ watch surgical footage and chuckle. Their coach wants them to be more serious. She sees a lot more problems then they do.

She also talks about their egos. AJ is ready to leave. Devon discovers George has a brain bleed. Its small and surgery is too risky. Devon doesn’t know what to do. Meanwhile, Kit tells Bell if others see him getting coached they will be more willing to. He admits she did give good advice. Later, he tries out some of her techniques.

Hunley and Billie laugh about Conrad’s run in with some of the nurses. He is a veery eligible bachelor. He admits to Billie when they are alone he isn’t ready. She consoles him. The two share a moment. Later, Conrad sees GiGi with Marion in the daycare. She treats Conrad normal and GiGi loves her. It makes him think.

AJ faces off with his surgical coach. He thinks she is doing this because something happened to her. She admits she isn’t the best surgeon but she is good at making people great. See has no response.

Devon realizes George has Parkinson’s. Winston goes to talk to Celeste. She isn’t responding. A college kid is brought in to the ED with a large shard of glass in him. He stops responding and it brought to the OR right away.

Conrad meets with Celeste. Her oxygen stats were low. She talks to Conrad and Winston about how tired she has been. Conrad discovers she has stress cardiomyopathy. He tells Devon. They meet with Celeste and George. George doesn’t want to leave her and go to rehab. Celeste tells him she needs rest. They decide together to make it all work.

AJ and Bell go into the OR. Bell starts to use some tips from the coach, AJ follows. Their coach was right. After, they tell their coach they are thankful. She tells them she is done but AJ wants more. She laughs.

Devon talks to Kit about conducting clinical trials. She thinks it is a great idea. She wants a proposal.

Billie gets GiGi from daycare. She seems to bee interested in Conrad. He asks her what she thinks of him hanging with Marion. Billie tells him to go for it. She watches, sad as he leaves to go see Marion.