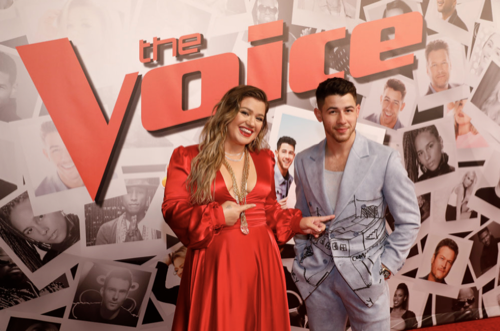 In tonight’s The Voice finale the episode begins with Carson Daly, one last time, welcoming our coaches; Blake Shelton, Kelly Clarkson, John Legend, and Nick Jonas. It all comes down to tonight, live from LA. Tonight we will have a celebration of 10 years of The Voice. Adam Levine is on the lot with his band, Maroon 5, as well as other superstars. The finalists are Team Blake, Cam Anthony – Team Kelly, Kenzie Wheeler – Team Nick, Rachel Mac, and Team John, Victor Solomon.

Last night, the final five artists performed two songs each. Kenzie sang “The Keeper of the Stars” and “Heartland,” Jordan sang “Stay” and “Key to the Highway,” Victor sang “I Can’t Make You Love Me” and “Freedom,” Rachel sang “I Hope You Dance” and “The Chain,” and Cam sang “Stand Up” and “Wanted Dead or Alive.”

Kelsea Ballerini returns to the stage, she replaced Kelly this year in the coach’s chair when she was sick. Kelsea sings her new single, “Half of My Hometown,” Kenzie joins her. After the performance, Kelsea says that she was so excited to be trusted to replace Kelly and she was super psyched to have Kenzie on stage with her.

Carson reveals that tonight’s winner and runner-up will with a trip to Universal Orlando Resort. Then, the youngest in the competition, Rachel, joins her coach Nick on stage for a performance of “Best Of You,” by the Foo Fighters.

One Republic is up next singing their latest single, “Run.”

Grammy winner Lauren Daigle performs “Hold On To Me.”

With all this entertainment it is definitely the biggest show of the season with the grand finale of The Voice. After being an amazing mega mentor this season, this hip hop legend returns to The Voice this time to join DJ Battlecat for their single together, “Sitting On Blades,” it is Snoop Dogg.

Carson Daly is with Ben Platt who will be performing soon with his new single, “Imagine” and Ben is hoping to bring a little joy to everyone. Carson says that Ben has been busy, he has his new single out and he finished his film adaptation of Dear Evan Hanson that he originated on Broadway. He says the film was challenging and incredible and pressurized, he developed it for four years and it has become a big part of his life, it’s big shoes of his own to fill but he is excited for people to see it, it’s very moving.

Justin sings, “Peaches” and “Hold On.”

John is on stage, he joins Victor while they perform, “Some Day We’ll All Be Free,” by Donny Hathaway. Victor loves the soulfulness of this song, the words, the meaning as well, Donny is an artist that he has always looked to for inspiration. John says Victor and he started the show singing together and it only makes sense that they would close it together in the finale. Victor says it was a dream come true to actually sing in the studio with John Legend.

It was a coaching block that kickstarted the perfect Voice partnership, it could lead to both of them winning this whole thing; Kelly and Kenzie. Kelly and Kenzie record “When You Say Nothing At All,” by Keith Whitley. The two head up on stage to perform it.

Two top artists and two of Blake’s favorite songs. Blake is doing a duet with Cam Anthony when they perform, “She Drives Me Crazy,” by the Fine Young Cannibals and Jordan Matthew Young with “All My Exes Live In Texas,” by George Strait.

Adam Levine returns to the stage with his bandmates with their new single featuring Megan Thee Stallion, “Beautiful Mistakes.”

The five finalists return to the stage. It is time for results: