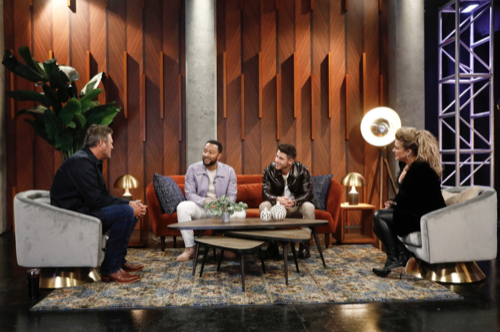 Tonight on NBC’s Emmy Award-winning musical competition The Voice airs with an all-new Tuesday, March 2, 2021, season 20 episode 2 “The Blind Auditions, Part 2,” and we have your The Voice recap right below. On tonight’s The Voice season 20 episode 2 “The Blind Auditions, Part 2” as per the NBC synopsis, “Coaches Kelly Clarkson, Nick Jonas, John Legend, and Blake Shelton all vie to discover and coach the next singing phenomenon on the second night of blind auditions.”

In tonight’s episode of The Voice Nick’s was a sophomore. This was his second season on the show and it was off to a great start. He was feeling more confident this year. He also came ready to make jokes. He pinned a “Block Me” sign on Blake after Blake had leaned in for a hug wasn’t looking and so Blake got him back for that. Blake later blocked him during a rare Four-chair turn.

It was rare because often the judges disagree about a vocalist and so them being in agreement about someone was something special. It was something that only came around once or twice a season. The judges all turned for Gean Garcia. He was from New York City and he was the son of a Spanish Christian artist named John Carlos. Gean had chosen a great song for him. He chose the song “All I Wanted” by Kodaline and it was so beautiful and haunting that the judges all turned for him.

Gean was currently living in Texas. Kelly of course spoke up as a fellow Texan and she also had Nick in her corner. Nick had been blocked by Blake. He knew it and so did everyone else, but Blake refused to own up to it and so they accused him of being a liar judge and they told Gean that he doesn’t want a guy like that in his corner. Gean eventually picked Kelly to be his coach. He liked Kelly’s energy and the two will work together just fine.

The next contestant was Aaron Konzelman. He was the son of Christian artists. Both of his parents were performers and they even built their own music studio at the house and so Aaron got to use it growing up. He also got to run off into the woods if he wanted to. They lived on a great bit of acres and Aaron got to be a wilderness kid.

Aaron later met his wife at college. They dated for a little under a year before he proposed and now they perform together. They perform at churches. Aaron also is a karate coach, runs a leather company, and helps out at churches across America. He was the jack of all trades. Aaron chose the song “Ordinary World” by Duran Duran and his rendition of the song was special. It interested both Blake and John who have such different tastes. Blake leans more towards Country and John towards R&B and Soul Pop. Aaron was more Rock. The two guys loved him and they fought him and Aaron chose Blake. Both Blake and Kelly had gained someone in the first half and now it was up to the other two judges to enlist someone.

Lucky for them, the next contestant was Carolina Rial. She was from New Jersey and she was a kid. She was seventeen. She lost her father when she was three because he was diagnosed with cancer. So, in honor of him, she chose the song “Stay With Me” by Sam Smith. She went for those high notes that Kelly later warned her about and Kelly also said that John would be a great coach for her because he has a special touch in rearranging songs. Nick tried to speak up for himself. He said that he too coaches his artists toward success and it’s true. He does amazing things with his artists. Carolina just wasn’t going to be one of them. She chose John and John serenaded her with his special song.

Ethan Lively is another kid. He was the next contestant and he too was seventeen. Ethan also has this lovely country twang. It can be heard in every word he spoke and so it didn’t matter if he was a Country artist before all of this because that twang made everything he said sound country. Ethan performed the song “You Look So Good In Love”. It was a throwback song and both Blake and Kelly knew it right off. They were singing along when Blake chose to turns for Ethan. Blake was the only person to have done so and that meant Ethan automatically joins his team. Blake was the first coach to earn two contestants for the night. He also took the other judges to task for not turning for Ethan because Ethan was true country and Blake said that they needed more people like Ethan in the competition.

YellSmiles went next. Her real name is Danielle Escobar and so her stage name was the ending of her first name. However, Yell didn’t get her desired result. She chose a song that didn’t fit her in the slightest and none of the judges turned for her. She can try again next year but in the meantime, it was onto the next contestant. The next contestant was Zae Romeo. He was a Texan and he had a rough start to life. He went into the foster care system with his siblings when he was three. He remembers being placed in homes where there wasn’t love and so he came to doubt he was loved when he was adopted at age 6. Zae’s adoptive parents were good people. They adopted him and his siblings and it still wasn’t enough for Zae because he didn’t feel like he could trust it. And so he ran away from home one day.

Zae was a teenager. He was dealing with insecurities and high school and he couldn’t take it. He ran away. He was gone for about ten days when he saw posters of him up all over town. His parents had been looking for him ever since he disappeared and so seeing those posters finally convinced him to call home. He called his mom. She came and got him and together with the rest of the family they worked on making Zae feel he was loved. Zae was now in a better place because of his family. He auditioned tonight with the song “Falling”. He poured his heart and soul into the song and it received a rare four-chair turn. The judges all turned for him. They all loved his voice and Zae decided to go with Nick. This was Nick’s first contestant of the night.

His luck turned around. It turned with a great artist and he won over Zae because he alone spotted that Zae had been influenced by Labrinth.