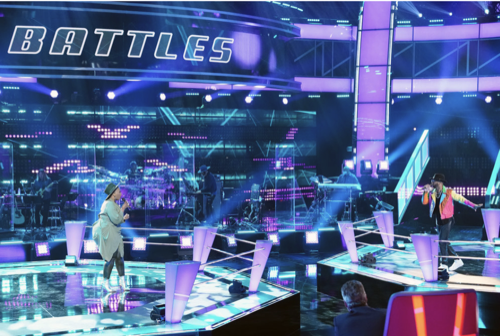 Tonight on NBC’s Emmy Award-winning musical competition The Voice airs with an all-new Tuesday, April 5, 2021, season 20 episode 8 “The Battles Part 2,” and we have your The Voice recap right below. On tonight’s The Voice season 20 episode 8 “The Battles Part 2” as per the NBC synopsis, “The battle rounds continue as the coaches enlist music industry powerhouses Luis Fonsi, Dan + Shay, Brandy, and Darren Criss to prepare their artists to go head-to-head in hopes of advancing to the knockouts; each coach has one steal and one save.”

In tonight’s episode of The Voice, the episode begins with saying hello to the coaches; John Legend, Nick Jonas, Blake Shelton, and Kelsea Ballerini replacing Kelly Clarkson again for this episode.

The Battles continue with Team Blake and the first battle is Emma Caroline vs. Cam Anthony. Blake says this is an interesting pairing because both are different genres. Their mentors are Dan + Shay and they will be performing “10,000 Hours,” by Dan + Shay who wrote the song – and Justin Bieber.

Coaches Comments: John: “Emma, your tone is really lovely, that clarity, that grace, and power, it is really enjoyable to listen to your voice. Cam, Nick blocked me when I wanted you on my team. You sing with fire and conviction, that conviction pushed me over the edge with you.” Nick: “Emma really nice voice, Blake well done. You’ve got this pure beautiful tone that I think makes you stand out. Cam, you have a real gift there is no denying it. Stage presence, your breath control was phenomenal, and you made some really cool choice. I would go with Cam, but Emma I think you are great.” Blake: “Emma you are an incredible vocalist, it only appeared that you were having so much when you weren’t singing, because of your body language. Cam, you look like you were born to do this.” Kelsea: “When John, Nick, and Blake all talk about your tone and how amazing it is Emma, you sound like a superhero. I want you to own it more. Cam, you are so confident on stage and it is good to see the way you played off her, the cameras, and us.” The winner of this battle is Cam Anthony and Blake decides to save Emma.

Next is Team Kelly and her mentor for her team is Luis Fonsi and the first battle for this team tonight is Halley Greg vs. Gihanna Zoe and they will be singing, “Thinking Out Loud,” by Ed Sheeran.

Coaches Comments: Blake: “Halley, your voice is very different and it’s kind of quirky, you are not like anybody else. Gihanna you are 17 and your voice seems older than that, and to have that kind of swagger on stage is really good.” Nick: “Halley, you have wonderful energy, you have all the makings of a great singer. Gihanna you shined in this performance, if I closed my eyes, I would have thought Beyoncé was here. Kelsea, if I were you, I would go with Gihanna.” John: “I want Halley to be clear that when people say you are different, that is your superpower. I would rather you be different than sound like everyone else. Gihanna a lot of times when singers are your age, they can’t do the lows and the highs, you are just fantastic.” Kelsea: “Kelly has told me a lot, her messages on my phone are blowing me up right now. She loves both of you. Halley, I grew up listening to female powerhouses, I wanted you to know that quirky is a good thing. Gihanna you have a presence on stage, Kelly wants you to not think about it so much and just enjoy. You are both incredibly talented people.” The winner of this battle, according to Kelly and Kelsea, is Gihanna.

Next is Team John and his mentor is Brandy. The first singers to perform for this battle are Zania Alake vs. Durell Anthony, they will be performing, “Emotion,” with Destiny’s version.

Coaches Comments: Kelsea: “I wish Kelly was here, that song was so beautiful, and you complimented each other so well and I am blown away. I don’t even know what to say, I truly enjoyed that as a fan, thank you.” Blake: “You guys are with the right coach from this moment on, you sounded great and I thought, man this must be hard to be up there Durrell, and sing in that register. Zania there is always one it factor thing that you can deny, and you just have that thing. I would go with Zania if it were me.” Nick: “I think the song choice was great John. Zania you have a lot of strength and courage as an artist and singer. Durrell you were so inspiring with your falsetto and as an artist to me, it was a lot. Durrell won this battle for me.” John: “Durrell my favorite part of your voice is your falsetto, you were in a place where you could shine. Zania you have poise and grace, and you were wonderful, you delivered.” The winner of this battle is Zania.

Team Blake is next and his mentors Dan + Shay are back when Jordan Matthew Young and Keegan Ferrell battle it out. They will be performing, “Calling All Angels,” by Train.

Coaches Comments: Nick: “Keegan from the blinds to this battle, you have grown very quick. That top register was coming out in a great way, despite the coaching. I want to see you enjoy this more. Jordan you are just cool man, you have an outfit that I could never pull it off. I think Jordan has a shot to win this whole thing.” John: “I found you both compelling, in different ways. Jordan, I told you when you walked out how cool your outfit was and you are such a star. But I differ with Nick, I felt like Keegan’s voice was just flawless. I truly enjoyed listening to you both sing.” Kelsea: “Jordan, I was watching you and I thought he looks so comfortable, and then I started thinking you probably went through that period of ‘what’s my vibe.’ Keegan when you went to that high note, you did it every time perfectly. I think you are hungry and down to be taught. I was impressed by both of you, but I would go with Jordan.” Blake: “You both sound wonderful together and it is because you put in the work. Keegan is a guy that music is second nature to him, but not performing. Jordan has been performing in bars for the last ten years.” The winner of this battle is Jordan. Nick steals Keegan.

Team Nick is up, and his mentor is Darren Criss. The hopefuls who will be battling against each other are Zae Romeo vs. Lindsay Joan and they are performing to “Rewrite The Stars,” by Zac Efron and Zendaya.

Coaches Comments: John: “Both of you have expansive ranges and seeing you soar together was a joy for us to behold. This is a tough one Nick, I am truly not sure who you should pick. I could Zae because I turned for him, but I could say no because he didn’t choose me. I’m copping out.” Kelsea: “I thought it was a good song choice for Lindsay, I thought she would kill it and she did. And then Zae, I was like you can do anything. It is a really hard choice, I would say Zae really held his own and I was really impressed.” Blake: “Zae, I really liked the tone of your voice, and I am sure that is why you had four chairs turn for you. Lindsay, you really shocked me, and to complicate things, I am going to pick Lindsay.” Nick: “Zae, Lindsay, this performance should be a learning opportunity, move forward with confidence, this journey has been incredible and it has been an honor to coach you.” The winner of this battle is Zae Romeo.

We get a quick recap of Team John’s Ciana Pelekai vs. Denisha Dalton when they performed, “You Broke Me First,” by Tate McRae and John announced the winner of the battle was Ciana.

Team Kelly is last this evening, her mentor is back, Luis Fonsi and for this battle, it is Corey Ward vs. Savanna Woods and they will be performing, “Dreams,” by Fleetwood Mac.

Coaches Comments: Blake: “I think you both did great but we kind of has to figure out what happened in the middle. It had the potential of someone being pitchy there. Savannah you are the biggest surprise, you have an angelic voice but so powerful. Corey, you can’t put a value on that sound that you have, along with your pitch is good. Savannah shocked me.” Nick: “I would like to help you Kelsea, but I am at a loss because you both are special artists. Savannah, if you made a record right now, I would want to buy it and listen to you live. Corey, you rose to the occasion, keep tapping into that source that drives you.” John: “You both seem to love to be in the moment, it’s lifting when performers put love in it. I would lean to Corey, you had urgency and it was compelling.” Kelsea: “This is my favorite song, it is hard to make your own and you did, especially Savannah. Corey, when I watched your blinds I couldn’t figure if you were county or singer/songwriter, and I love that. I have spoken to Kelly in-depth regarding you both.” The winner of this battle is Corey, and Kelsea saves Savannah for Kelly.