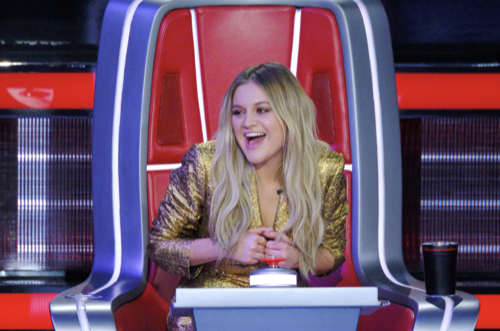 Tonight on NBC’s Emmy Award-winning musical competition The Voice airs with an all-new Tuesday, April 12, 2021, season 20 episode 9 “The Battles Part 3,” and we have your The Voice recap right below. On tonight’s The Voice season 20 episode 8 “The Battles Part 2” as per the NBC synopsis, “The battle rounds conclude as the coaches enlist music industry powerhouses Luis Fonsi, Dan + Shay, Brandy, and Darren Criss to prepare their artists to go head-to-head in hope of advancing to the knockouts; each coach has one steal and one save.”

Tonight’s episode of The Voice begins with Blake Shelton checking himself out in the memory, and Kelsea Ballerini saying that he looks the same for ten years. Kelsea is again this evening filling in for Kelly Clarkson.

The first team-up tonight is Team John with his advisor for his team, Brandy. Victor Solomon and Deion Warren are battling against each other. This rehearsal doesn’t have a band, John wanted to hear their raw voices. The two will be singing, “You Got It Bad,” by Usher.

Coaches Comments: Blake: “Deion as much as I enjoyed watching your performance, I heard pitch things that I didn’t hear with Victor. I think if you could take a note, Victor from Deion’s book though is that he does have a lot of personalities when he performs. From what I heard vocally, I would be going with Victor.” Nick: “I turned for both you guys in the blind auditions and you just reminded me why. You are both unbelievable, your vocals were absolutely top-notch. I am not making a recommendation, I love both of you guys.” Kelsea: “I feel like I have just gone to a show and I haven’t done that in years, thank you for that. You are both powerhouses that blend so well, I am not going to pick one, sorry.” John: “When we were rehearsing, I said often about the performance part. I was more confident that Deion would do it, but Victor you went beyond exceeding my expectations.”

The winner of this battle is Victor.

The next team up tonight is Team Kelly with her advisor, Luis Fonsi with Ainee and Anna Grace battle it out when they perform, “You Know I’m No Good,” by Amy Winehouse.

Coaches Comments: Blake: “Ainee it feels like sometimes when you are singing you are restricting yourself a little bit and for that reason, I think I would go with Anna.” Nick: “Anna I love how you kind of sing with your hands, you direct the notes. I feel a slight edge towards Ainee, it was really fresh. I loved this battle it was awesome.” John: “I loved watching both of you, you were both so engaging. I would choose Ainee, you are more my style with your flow.” Kelsea: “I am an extension of Kelly. Whether you are singing in the coffee shop you can have a moment, it is a really cool gift to give to someone. I know Kelly loves both of you so much and I know why because you are both so different.”

The winner of this battle is Anna.

Team Nick is up with his advisor, Darren Chris and he has chosen to have this battle with Raine Stern vs. Andrew Marshall. The two will be performing, “Adore You,” by Harry Styles.

Coaches Comments: John: “Raine you know I fought very hard for you. It was one of my big heartbreaks of this season, but I’m not spiteful about these things. Andrew as a one-chair turn, you are sometimes the underdog, and I feel that you did a better job on this performance. You sounded like you were in your pocket like you were a natural for this.” Kelsea: “I love this song and Andrew this song is better suited to you. Vocally I was more drawn to Andrew, performance-wise I was more drawn to Raine, you are so fun to watch and you can see that you love it which is truly an artist.” Blake: “Raine you are very popular on the show already and you are in popular demand in the blinds, I was begging for you. But in this performance, Andrew was stronger and I think he won this one also.” Nick: “This one is really tough, I would be lying if I said I didn’t agree with the coaches. Andrew, you nailed this and there is a magic that surrounds Raine and you both deserve to be here.”

The winner of this battle is Raine. Andrew is stolen by Blake, he used his one and only steal.

Team Blake is next and he is with his advisors, Dan + Shay. Savanna Chestnut and Pete Mroz will be battling it out when they perform, “Have A Little Faith In Me,” by John Hiatt.

Coaches Comments: Nick: “Savanna, you were really good. It was well executed, each note was thoughtfully performed. Pete your voice is so soothing and fun to listen to and reminds me of Steven Chapman, and all those great records that I grew up to, you knocked it out of the park.” John: “Savanna you really are a wonderful singer, I think what was missing was a sense of urgency from you. You need to believe that you really can sing and have something to say and say it with more passion and emphasis.” Kelsea: “What I heard that makes you different is your bravado, I heard little pockets of it and it is so good. I heard one flip that you did, and it was beautiful. Pete, I just love watching you, that performance could be here, in a stadium and you would perform it the same because that is who you are.” Blake: “Savanna, I still feel like you are keeping everything in your head and not letting us in. Pete, you are a great singer twenty-five years ago and you are still a great singer. I think you did a terrific job.”

The winner of this battle is Pete.

Team Kelly is next, and she tells Kelsea that the last pairing is JD Casper and Kenzie Wheeler. They are both shy and she is hoping tonight they will both come out of their shells. JD and Kenzie are battling it out with a performance of “Fishing In The Dark,” by the Nitty Gritty Dirt Band.

Coaches Comments: Blake: “JD I don’t know if the instruments helped you in this performance, but Kenzie really threw himself in that vocal performance and I would go with him.” Nick: “Kenzie I think you may have jumped out of a time machine and arrived at the blind auditions for this show. There is just an authenticity about your whole thing that is so fun to be a part of. JD you did an amazing job of showing us who you are, you are a wonderful artist.” John: “I think both of them were really well-executed performances, you both know who you are as vocalists.” Kelsea: “I really enjoyed that, you are both so talented. JD the song choice may have favored Kenzie a bit more. Kenzie I don’t think you know how good you are and that is great about you.”

The winner of this battle is Kenzie.

Team Nick is back with Darren Criss and this battle is between Rachel Mac and Bradley Sinclair, they will be performing, “Your Song,” by Sir Elton John.

Coaches Comments: John: “You two were beautiful just now. When we have these moments it reminds us why we love music. Honestly, I don’t know how you decide because they were both perfect.” Kelsea: “Rachel you are 16, wow. The fact that you have that vocal control is maddening to me. Bradley, you started singing and I was just taken aback. You just moved to Nashville and I am so happy you are there. I wish Kelly could have seen that, felt that in the room. I would be interested in seeing more from Bradley.” Blake: “Bradly, when you make your voice shred, that is so good. I am dying to hear you sing again. Rachel is 16 and is going to start experience success. If this is a tie, I would pick Rachel because Nick understands going through this and being young.” Nick: “You both just gave the best performance that we have had in the battle rounds.”

The winner of this battle is Rachel.

The last battle for the night is Team John and his advisor, Brandy joins him. Rio Doyle and Carolina Rial and will be performing, “Somebody I Used To Know,” by Gotye featuring Kimbra.

Coaches Comments: Kelsea: “Wow, I loved that so much. You guys are both incredible, your stage presence and you both didn’t lose your breath. I feel like there is more experience with Carolina, but you are both magnificent, and congratulations on making it this far.” Blake: “Rio, I think you are an amazing vocalist, like oh my God, but because of that vowel thing you are doing, I almost couldn’t hear the lyrics. Carolina did that less, I was actually able to hear the song and the lyrics. At this moment, I would go with Carolina.” Nick: “Rio I am blown away with the power in your voice. Carolina, you have a refreshing vibe that I think is going to get better and better. Rio would be my pick but Carolina you are exceptional.” John: “You are both so young, I love how confident and composed you both were through all this process. Carolina, your range is incredible. Rio, you have a unique tone and nobody sounds like you.”

The winner of this battle is Rio. Carolina is saved, John uses his only save on her.