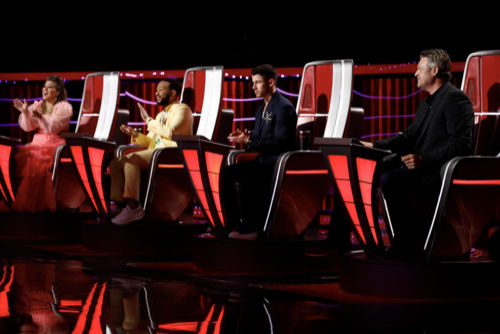 Tonight on NBC’s Emmy Award-winning musical competition The Voice airs with an all-new Tuesday, May 11, 2021, season 20 episode 14 “Live Top 17 Results,” and we have your The Voice recap right below. On tonight’s The Voice season 20 episode 14 “Live Top 17 Performances” as per the NBC synopsis, “Four artists, one from each team, are revealed as safe by America’s votes; each coach selects an artist to move forward; the artist with the next highest votes from each team will compete in the wildcard instant save for the top nine’s last spot.”

In tonight’s The Voice episode, tonight’s episode begins with Carson Daly announcing that tonight the semi-finalists will be revealed, then we say hi to the coaches; Kelly Clarkson, John Legend, Nick Jonas, and Blake Shelton. The top artist from each team with the most votes will automatically advance, then the coaches will have the task of having to make a very difficult decision and they will select the other remaining artist. Then one artist from each team will get to compete for the wild card spot in the top nine, they will perform tonight. Viewers at home will instantly save one of them.

Team Blake moves up to the center stage in no particular order. Cam Anthony is the first artist to automatically move forward. Blake can now choose only of the artists to move on. Blake says they all did an incredible job, and this is a very difficult decision for him. Blake chooses to save Jordan Matthew Young.

Team Nick is up next and Rachel Mac received the highest votes and automatically moves forward. Nick now gets to choose one of his remaining artists to move forward to the next round. Nick says that what a pleasure it has been to work with each and every one of them. Nick chooses to save Dana Monique, who he says is flawless.

Team John moves to the stage, Carson wishes them luck and tells Victor Solomon that he had the most votes and is saved by America. It is now John’s turn to have his tough moment and save one artist. John says he truly loves all three of them, they are so wonderful, fantastic talent, they approached this competition with such heart, such class, such professionalism, and they were a gift to us. John chooses to save Pia Renee.

The last artists up tonight on stage are from Team Kelly, the artist who received the most votes and was saved by America is Kenzie Wheeler. This is a tough moment for Kelly, she needs to make her decision. Kelly says this horrible for the coaches to have chosen from different artists who are all great. Kelly chooses to save Gihanna Zoe.

On to the Wild Card save, we are going to focus now on one team at a time. Out of the remaining artists on that team, the one with the most votes from last night will sing for the Wild Card instant save, the others will be going home.

Pete Mroz is singing, “Speechless.” Blake: “Pete, you are an incredible singer, that goes without saying. I want people out there to know that it is one thing to be here and hear people’s backstories, its crazy for me to have been there in the beginning when you got started and we are still doing. Vote for Pete, he deserves a shot.”

Jose Figueroa Jr. is singing, “Supersticous.” Nick: “That was an electrifying performance, one of my favorites songs of all time. I think you did your thing with it, America has to vote for Jose. No one in this competition has been as dedicated to their craft and absolutely nailing it.”

Corey Ward is singing, “Lose You To Love Me.” Kelly: “I am floored. I have not to hear you sing that or record that. Literally, you are an incredible vocalist. You are actually what this show is about, you have a golden voice.”

Ryleigh Modig is singing, “It Will Rain.” John: “I’ve already told you how magical your voice is especially your bravado, you put so much artistry in everything you sing. You are so young and you have so much fire, I am excited that I have worked with you and America, vote for Ryleigh.

The artist moving forward and saved by America in the Wild Card is Corey Ward.

Eliminated Zae Romeo, Zania Alake, Devan Blake Jones, Andrew Marshall, Anna Grace, along with the three Wild Cards who did not get voted back in by America.