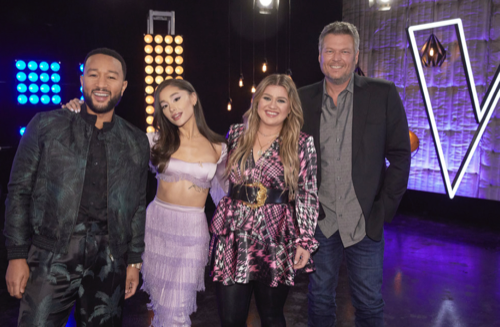 Tonight on NBC’s Emmy Award-winning musical competition The Voice airs with an all-new Monday, October 19, 2021, season 21 episode 10 “The Battles Part 4,” and we have your The Voice recap right below. On tonight’s The Voice season 21 episode 10 “The battle rounds conclude as the coaches enlist music industry powerhouses Jason Aldean, Kristin Chenoweth, Dierks Bentley and Camila Cabello to prepare their artists to go head-to-head in hopes of advancing to the knockouts.”

In tonight’s the Voice episode, its Night Four of the Battles! The Battles is when two members of the same team compete for a spot to remain on that team and up first was Team Ariana. Ryleigh and KCK3 were the first to battle it out. They performed “Come On Over” by Christina Aguilera. Ariana brought in her old Kristin Chenoworth. Which Ryleigh specially loved because she was a theater kid growing up.

Kristin loved Ryleigh in return. She loved the acting that Ryleigh included into her performance but the performance as a whole had needed some work before it won Ariana’s approval. Ariana had been afraid at first that the harmonies would sound like background singers and so she asked the members of KCK3 to break up the harmony a little. She also told Ryleigh that she doesn’t always have to be at a 10. She could sing in a lower register.

But by time Ariana was done, the performance was so fine tune that it had sounded amazing. The judges all seemed to enjoy it. They loved the harmonies and they loved Ryleigh dancing. Ryleigh had fun up on that stage and it showed in all that she did. Ryleigh won the battle. It wasn’t a surprise and all the judges agreed with the decision. Next up was Team Kelly. Kelly had Parker competing against the Cunningham Sisters.

She and her celebrity mentor Jason Aldean gave the trio the song “Its My Party”. It was an unusual song choice and yet the three young women did wonderful things with it. Parker’s voice also blew away everyone. She brought some jazz and blue tones to the song. The sisters also sounded amazing. The younger sister had some Adele in her tones and the older sister hit those high notes like they were nothing.

The performance these three young ladies put on had made the somewhat amusing song “Its My Party” sound very haunting. It was in fact a sad song but no one realized how sad until they heard the performance tonight. The battle wasn’t an easy one. The judges were split on wanting to keep both Parker and the Cunningham Sisters and so Kelly struggled for a while before she named a winner. The ultimate winner ended up being the Cunningham Sisters. Kelly realized she could go far with them and that was the point of the battles. It was supposed to help the judges trim the people they could lose. She kept the Cunningham Sisters and Parker was unfortunately eliminated. Next up was Team Blake. Blake put Berritt Haynes up against Kaitlyn Valez. They performed the song “Yellow”.

Blake hadn’t hesitated in the slightest when he named Berritt the winner. Unfortunately, the show didn’t show much of this performance or the background going into it because they wanted to quickly conclude the battles but the next battle was from Team John. John brought in Camila Cabello as his celebrity mentor and his two competitors loved meeting her. Jonathan Mouton and Paris Winningham competed against each other. They both had some Luther vibes to their voices and so John chose Luther Vandross song that he himself used to perform at weddings. Both men have lived through things. They both have that pain and love in their voices as they performed the song. The two performed “Here & Now”. And right away it was clear that the audience and the judges all loved this song.

The two men were great but the response from the crowd when they realized what song they were going to play was something else. Everyone loves a good Luther Vandross song. Its why he’s so popular at weddings. The winner of this battle was Paris. But this wasn’t a goodbye for Jonathan. Blake chose to use his Steal to collect him and that was a wrap for the last night of the Battles.