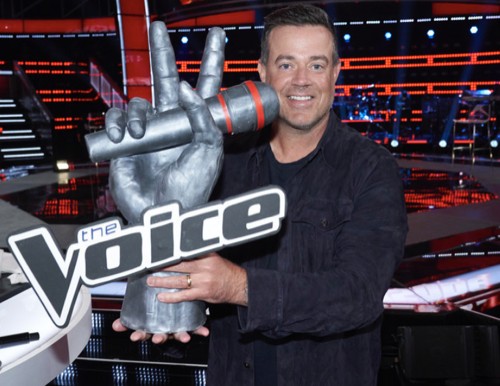 Tonight on NBC’s Emmy Award-winning musical competition The Voice airs with an all-new Monday, November 1, 2021, season 21 episode 13 “The Knockouts Part 3,” and we have your The Voice recap right below. On tonight’s The Voice season 21 episode 13 “Global superstar Ed Sheeran serves as Mega Mentor to all of the teams on the final night of the Knockouts. The coaches, who each have one steal, pair their artists to perform individually against a teammate, then select a winner to move on to the Live Playoffs.”

In tonight’s The Voice episode, Team Legend gets right down to business. John has Ed Sheeran with him to work with two of his female singers. Samara sings a Tina Turner song. They love it and all want to see is a very few minor note changes. Shadale performs next. John wants her slow the song a little. They sing background for her. She is thrilled.

On to the knockouts. Samara sings first. The audio loves it. The judges are all impressed. Shadale takes the stage next. She sings Impossible. The judges also think she is amazing. Kelly loved Samara but Shadale really moved her with her rendition. Kelly gets choked up. Blake feels the same. He really connected with Shadale. Ariana was equally impressed. John feels like Samara gave a flawless performance. Shadale vocally gave her best. He picks Shadale. She is moving on to the lives.

Ed Sheeran works with Blake and his two singers set to compete. Carson plays the fiddle, singing a George Strait song. Ed loves his voice. Next, they watch Lana sing her song next. Ed gives tips on hitting high, soft notes. Later, the two enter into the knockouts against one another. Lana sings a Taylor Swift song first. She kills it. Kelly shakes her head, smiling. Blake looks proud. Carson is up next. After he sings while playing the fiddle, Ariana would choose him. John picks Lana. Kelly gives them both pointers but seemed more important by Lana. Blake agrees, he chooses her.

Ariana and Ed meet up with Bella and Katherine. Ariana feels they are two powerhouses. They have also become friends. Bella shows off her song first. They love it. They offer pitch tips. Katherine goes next. She sings a Bel Biv Devoe song.

On to the knockouts, Bella goes first singing Chandelier. They love it. Katherine takes the stage next. John thinks she sings well but her song choice was bold. He sides with Bella. Blake was impressed as well as Kelly. Katherine really took a chance. They both pick her. Ariana decides to go with Bella.

Ed sits with Kelly as she brings out two male singers on her team, Jeremy and Xavier. Jeremy chooses a Whitney Houston song. They love it. Xavier shows off his range next. Kelly tells him to take his song slow and make it more of a conversation. Don’t just hit the gas.

Jeremy takes the stage to sing his rendition of Whitney. They are all surprised by his selection. Xavier performs his song next. Within seconds John approves. The crowd goes wild. The coaches all clearly think Jeremy is great but majority wise, they love Xavier’s tone. Kelly is troubled by who to pick. She chooses Jeremy who is overcome with emotion. John is sad to see Xavier go home.

Blake and Ed meet with Blake’s two male singers. He tells them to take it easy, don’t blow their voices out but get comfortable. Ed tells them to stay fluid. The show quickly jumps into their performances. Blake picks Peedy.

Back to Ariana’s team. She welcomes Jim and Sasha as well as Manny. Manny really needs to own his style. Ed loves the father, son duo. He finds it so wholesome. Ariana loves the connection. She wants them to find the balance.

Ariana thinks this is going to be a tough knockout. Jim and Sasha take the stage first. The audience loves their partnership. Manny goes next. All of the coaches appreciate all three performers. Ariana is torn. She chooses Jim and Sasha. Manny says goodbye. He gave his all. But he was happy to be here. Ariana is emotional after. This takes a lot out of her.

John and Ed meet with his two singers, Jershika and Paris. John is so proud of his team. Ed is impressed. On to the knockouts, Jershika impresses the coaches. Blake smiles while Ariana and John stand. John cheers her on. Paris sings Chris Stapleton next. They are in love with him as well. John cheers him on. Kelly thinks John is so screwed. They are both so good. Blake makes fun of Kelly who let Jershika go.

John goes with Jershika and just as Paris says his goodbyes, Blake steals Paris. Paris is excited to continue on.