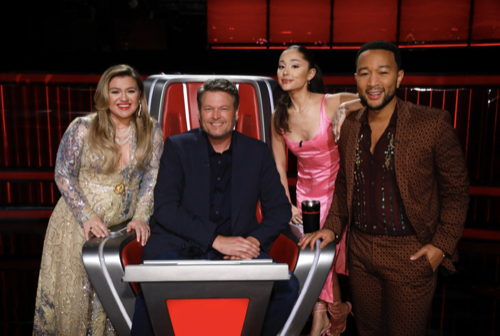 Tonight on NBC’s Emmy Award-winning musical competition The Voice airs with an all-new Tuesday, November 16, 2021, season 21 episode 17 “Live Top 13 Eliminations,” and we have your The Voice recap right below. On tonight’s The Voice season 21 episode 16 “The Top 10 highest artists are revealed as safe by America’s votes while the bottom three compete in the Instant Save.

In tonight’s The Voice episode, Carson introduces the coaches quickly before getting right into the results. Two artists will go home tonight with one artist able to be saved by the public. The top 13 arrive on stage. Three of the artists who are safe are Team Kelly’s Girl Named Tom, Team Legend’s Jershika, and Team Ariana’s Holly.

Several singers take the stage to perform with their coach John. Back to the results, out of the remaining 10, Team Blake’s Wendy has been saved. America also saved from Team Kelly, Hailey!

The remaining 8 artists come back to the stage. From Team Legend, Joshua has been saved. America also saved the father and son duo on Team Kelly and Paris of Team Blake.

More results are on the way as there are still 5 artists remaining.

Kelly takes the stage to sing with her team for the first time. They all sing together. The bottom three artists will now be revealed. They will have a chance to sing one more time for a chance to move on.

The 5 remaining artists take the stage. The two who have been saved are Jeremy of Team Kelly and Lana from Team Blake. Shadale, Gymani, and Ryleigh must sing for a save.

Shadale takes the stage first to sing. John thinks she did great. Gymani is up next. The crowd loves her rendition of Sweet Love. Kelly is proud. Ryleigh sings next. Ariana loves her performance.

America can now vote for an instant save for one of the three. While the votes are counted all of the singers give their thanks to their coaches. America has saved…Gymani! The other two will go home.