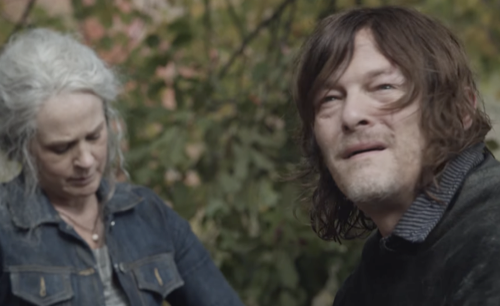 Tonight on AMC our favorite show The Walking Dead airs on an all-new Sunday, March 7, 2020, episode and we have your The Walking Dead recap below. On tonight’s The Walking Dead Season 10 Episode 18  called, “Find Me,” as per the AMC synopsis, “Daryl and Carol find an old cabin that takes Daryl back to his years away from the group after Rick disappeared; he relives the painful memory of meeting a reticent survivor and the toxic events that amplified his relationship with Dog.”

In tonight’s The Walking Dead episode, we see Daryl, he is getting on his motorcycle, Carol picks up a map from the ground. Daryl is having a hard time getting It started, he asks her why she followed him out there. She says she wants to hunt whatever is left out there to hunt and he needs a good spotter. Carol jumps on the motorcycle.

They stop and talk; Carol says the dead are going to catch with them eventually. All of a sudden dog starts barking and runs off. They both run after him into the woods. They arrive at a clearing and there is an old cabin. Daryl thinks back to another time when he was at a cabin. Carol goes inside, she tells him that they can spend the night there, they just have to barricade the door. Back to the past, five years ago, Daryl was sitting down by the water, he had a fire going on nearby. Then, he hears dog who was just a puppy back then.

He has a shelter built, he goes inside and looks at a map that he has. Carol is there, Daryl says he has to do this. He asks about Michonne and the kids. She asks him how long it is going to take; he has been gone two years. She says if it wasn’t for everything going on at the Kingdom, she would be there with him. Daryl then tells her there is a storm coming and he has to go, she tells him to be careful.

Daryl sees a rowboat; he makes his way to it and kills a few walkers on his way. Then we see Daryl, he is in his shelter again and it is a huge rainstorm outside with thunder and lightning. His map gets wet, he screams, and gets hit by lightning. One year later, Daryl is walking in the forest, he sees dog and rubs his head. Dog is freaking out; he leads Daryl to a cabin. A woman is inside, and she pulls a rifle on Daryl.

Fast forward, Daryl is in the cabin with dog who is telling Carol to dig up some floorboards, there is something underneath. Carol takes out two boards and finds a map, dog finds a can of food. Carol asks Daryl to tell him whatever he wants to tell her about his time in the cabin.

Back to the woman with the rifle, she has a roaring fire, Daryl is sitting in a chair, he is tied up. He sees a picture of the woman and a child. Daryl asks her if she is going to kill him, she asks if she should. Then she tells her that he looks like he doesn’t want to die, today anyone. Then she asks who the hell he is and what he is doing on her land. He tells her his name is Daryl and her dog found him. She takes the rope off his hands and tells him to get out before she changes her mind. Daryl grabs his backpack and asks her name, but she won’t tell him.

Six months later, Daryl is in his shelter, which looks like a different one. Dog is there and starts barking and leads Daryl back to the cabin. The woman thanks Daryl for bringing him back, and tells Daryl that he likes him. Daryl asks her what the dog’s name is, she says dog. She tells him it’s not for everyone, living out in the wild. She tells dog to get inside and tells Daryl to be careful out there. Eight months later, Daryl is surrounded by a lot of walkers when the woman appears and she shoots one of them to help him. They hide in a tree and have to get very close to each other. The walkers disperse. He tells her that she needs to stay away from his camp, as she is leaving, she says her name is Lea.

Daryl is in front of the cabin, he throws something at the door and goes back to his shelter. Lea shows up at his shelter and she tells him that she can catch her own damn fish, she throws it back at him and tells him that she wants to be alone. He tells her that he gets it, wanting to be alone. Daryl ends up going back to the cabin with her, he sees her picking up the glass off the floor, looks like the frame of her, and the child fell to the floor. She tells Daryl it is his birthday today. She didn’t have a family growing up, but she found that with her squad.

They promised to stay together when the world fell apart, they gave her hope, she tried to give that to her son. She didn’t give birth to him, but he was her son. He was born to her sister, that is what she called her anyway, and lost her when he was born. He is gone now. She says they got attacked by so many walkers and the boy was a bit, she said goodbye to him the same day dog was born and she hasn’t seen another soul out there since, well not until Daryl came along.

She asks him who he lost. He says his brother, it was an accident. They are fishing together, on the first try, Lea catches a fish. Ten months later, they sitting across from each other at the dinner table. She is not talking to him, he says it is only going to be for a few days. She asks him where he belongs, looking for his brother, with the family he left or with her. He says he doesn’t know, she says he does and it is time to choose.

We see Daryl looking at the map, Carol walks up to him, he says he is busy. She asks if he is coming back, he says no. She says she came because she wanted to tell him that it may be a while before she comes back, things are tough at the Kingdom and Ezekiel needs her. He tells her that she doesn’t need his permission to move on with her life. She explains that she just wants him to move on with his life, she doesn’t want to lose him. He assured her that she hasn’t lost him, he just has the stuff to do.

Daryl then leaves her and goes through the forest, he senses something is wrong and heads back to the cabin. The door is open and the place looks ransacked. Dog is there, Daryl writes a note to Lea and it reads, I belong with you, find me. Daryl and dog head out, they head down to the water. Fast forward to the cabin, Daryl tells Carol that he should have been there, he could have helped her. Carol asks if it is possible that someone took her, or she just left. She tells him to stop thinking that every time he loses someone it is not on him. She says she is sorry for Connie, but she is not sorry for going after the hoard. He tells her to run, he won’t stop her this time and he knows where he has to be. She tells him that their luck has run out and it is going to be dark soon.