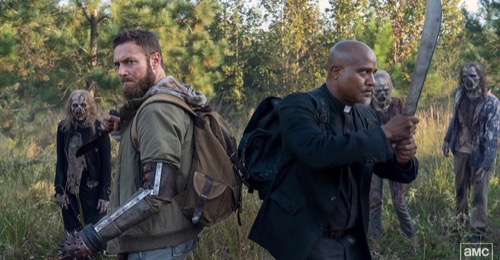 Tonight on AMC our favorite show The Walking Dead airs on an all-new Sunday, March 14, 2020, episode and we have your The Walking Dead recap below. On tonight’s The Walking Dead Season 10, Episode 19  called, “One More,” as per the AMC synopsis, “With Maggie’s map, Gabriel and Aaron search for food and supplies to bring back to Alexandria; checking out one more location, they chance upon a stash; faith is broken and optimism is fragmented when they are put to the ultimate test.”

In tonight’s The Walking Dead episode, the episode begins with Father Gabriel and Aaron, they are out scavenging and are following a map that Maggie gave to them. We see three charred bodies, that look like children.

Gabriel throws a timer and sets it off, so they see where the walkers are in the tall grass and they can avoid them. Gabriel finds a bullet on the ground and lots of skeletal remains. There are vehicles, Gabriel starts to search them in case there is anything they can use.

Next, the two see some buildings and are trying to get in one. There is a walker hanging out of a doorway and when they try to pull on him they rip his arms off. Aaron looks up and sees a lawn chair on the roof. They head up there and find a lot of dead people, turned into skeletons with a few walkers. Aaron is fed up, they have been at this for two weeks and have nothing to show for it, every place on Maggie’s map had nothing. Gabriel says one more.

They are walking through the mud when Gabriel is pulled down, Aaron kills the walker and it lands right on Gabriel who is now covered in mud. They can no longer see the map and it starts to rain, a real downpour. They have no choice but to move forward because they cannot go back, the rain has taken out their tracks. But, Gabriel is sure they can find the next location because it was near a water tower.

The two enter another structure, Aaron hears a noise and calls out hello, and says he is a friend, don’t be afraid. Aaron opens the door and we hear him screaming. Gabriel runs to him and finds Aaron full of blood, he killed a wild boar and Gabriel can’t stop laughing. Gabriel tells him that he feels like dinner he points to the boar and says drink, shows Aaron a nice bottle of whiskey that he found.

The two sit down and enjoy a meal of roasted boar and Gabriel tells Aaron that the whiskey is rare, it costs about $2000 a bottle; he gets Aaron to smell it first, then take a sip and watch the flavor evolve. Aaron says he knows the whiskey is rare, but they had a rough day, he wants more. They play a few rounds of poker and then sit in some comfy chairs that they found.

Gabriel starts talking about his life and a lesson that he was taught by one of his mentors. Aaron tells him that he needs to start preaching again. Aaron remembers when he would bring people to Alexandria, it would make him feel good, they need to do that again. Gabriel says he doesn’t want to preach again, he doesn’t think things are going to go back to the way they used to be.

Gabriel says evil people are not the exception to the rule, they are the rule. The two are loaded and Aaron says he is going to go up on the roof and jump after the next round, Gabriel offers to read him his rights and he says he will get back to him. Aaron then gets up to go pee, and the next thing we see, it is morning and Gabriel has woke up and cannot find Aaron.

Aaron sees a person, with an AK-47 and in a hooded coat, he asks him what he was cooking, Gabriels says boar. The guy’s name is Mays and he wants some of that boar. Gabriel gives it to him and asks if he saw Aaron. Mays says they trespassed on his hideout, ate his boar, and drank his whiskey. Gabriel says they mean no arm. Mays pull out Aaron’s arm, he has him. Mays tells Gabriel that Aaron is in a room nearby. They continue to talk back and forth, Mays was listening in to Gabriel and Aaron the whole night when they were getting drunk. Mays gets up and pulls Aaron out of the room, he is tied to a chair.

He tells them they are going to play a game of Russian roulette, he puts one bullet in his gun, they have a one-in-sixth chance. Gabriel says they are not doing it and Mays says if they don’t they both will die. Each man will have to pull the trigger on themselves or the other.

Gabriel is fist and he points the gun at himself, then Aaron does the same thing. Gabriel again and the same thing. Aaron tells Mays that they are not thieves or murderers and don’t kill each other, they protect each other like family. Mays says he was living with his brother who stole his food and tried to kill him, so he killed him and his family. Gabriel keeps talking and tries to soften Mays. Gabriel tells Mays that they can help him, he can join them in Alexandria. Mays stops the game, puts his gun away, and unties Aaron.

Just as Mays is introducing himself to Aaron, Gabriel bashes his head on and tells him that they couldn’t take him with them, he killed his brother’s family.

Before leaving, they loot Mays’ hiding place. They look around and find Mays’ brother tied to a pole, his wife and child are dead and skeletal on the ground. Gabriel tells him they are not going to hurt him, when Gabriel unties him, his brother grabs the gun, looks at his dead wife and child, and shoots himself in the head.

Gabriel and Aaron leave, they see the water tower and Aaron says it is the last place that was on Maggie’s map, the walk towards it.