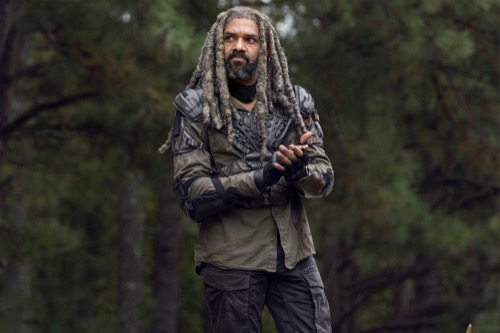 Tonight on AMC our favorite show The Walking Dead airs on an all-new Sunday, March 21, 2020, episode and we have your The Walking Dead recap below. On tonight’s The Walking Dead Season 10, Episode 20  called, “Splinter,” as per the AMC synopsis, “Eugene, Ezekiel, Yumiko, and Princess are captured and separated by the mysterious troopers that surrounded them at the rail yard.

Claustrophobic with mounting anxiety, Princess struggles with memories of her traumatic past, and plans to escape.”

In tonight’s episode of The Walking Dead, we see Princess, she is thrown into a boxcar, she tries to open the door, but it won’t budge. She thinks back to when they were captured by the army of people in white armored outfits. She sees some empty bags on the floor and checks them. Then, through a gap in the boards, she can see outside the boxcar. She heads to the other side of the boxcar and tries to loosen aboard and gets a splinter.

At school there were these cool kids, one taught her how to die her hair. Her mom sent her back to school, she got infected again. She had an abusive stepfather and her mother didn’t notice. He hit her, right across the jaw at the dinner table. She asked her mom if she was going to do something, anything, her mom said they don’t eat. Princess starts to get frantic when Yumiko no longer answers her. She looks outside the boards and sees them taking her away, she sees them beating her and they tell her to shut up.

Princess calls out to Yumiko, hoping that she is back, but there is no answer. She goes to the other end of the boxcar and notices a panel, she pulls it off and gets out. Once out, Eugene sees her and tells her to go back inside she is going to get caught. She tells him that they took Yumiko. Eugene tells her again to go back, they have to show themselves worthy of allegiance. She goes back and one guard comes in and tells her to follow him.

Then we see Princess naked, she is in a shower, one of the guards is there. Then she is called into a room and asks questions, her name, where she was when the fall happened and why she came there. The man tells her that Yumiko is ok. He wants to know about her friends. She tells him to ask them. She tells him that she wants to see Yumiko, he hits her, she falls to the floor and calls her a bitch.

Princess wakes up and she back in the boxcar. She goes to the hole in the board and says sorry to Yumiko. She says she didn’t tell them anything. On the other side, she lifts the panel and goes over to speak to Eugene again but he doesn’t answer. She heads back inside her boxcar. She heads a noise above, it is Ezekiel and he drops down inside the boxcar. He tells her that it wasn’t the most fun interview he has ever had. She says that Eugene believed they would help them, maybe they will. Ezekiel tells her they have to go and nobody is going to hurt her anymore, as long as he is there. She says she doesn’t want to leave without the rest, he says he doesn’t either, they are his friends.

He asks what if Eugene trusted the wrong people this time. She says she just wants to do the right thing. Then the door opens and a guard comes in to bring her a meal, Ezekiel is behind him and he knocks him out. Princess is not happy, she tells him that this is not a better plan. The guy wakes up, Ezekiel has the gun. Princess wants to know if Yumiko is ok, he says that she is probably with the medics. He tells them they should join them, but he can’t tell them what they would do for them. He says it is a good place, they are careful because they have a lot to lose.

He says he gets three square meals and an order to guard them, that is it. The guy trie to get free, Ezekiel tries to stop him and Princess tells him that he is going to kill him. Then she realizes, she was the one beating him and screaming. Princess takes his weapon and makes a run for it. She is about to escape under a fence and thinks about all the new friends that she met. Then she sees Ezekiel again, he is with walkers and they look like his friends. He tells her to go, she wants to go. He really tries to convince her to leave the friends behind.

Princess returns to the boxcar and tells him that she doesn’t know her own strength sometimes, she is not crazy. She takes off the handcuffs that she put on him and when she does, the splinter comes out of her finger. He puts back on his walkie talkie and she reluctantly gives him the weapon. She tells him where she is from, how she got there, and the names of her friends. He thanks her. He opens the door to the boxcar, and she sees all her friends down on the ground standing there, with black masks over their faces.