The Young and the Restless Spoilers: Adam’s Done With Sharon – Sally Captures Boyfriend by Christmas? 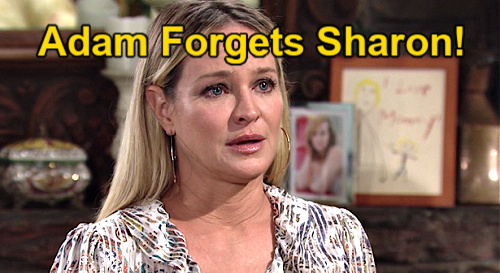 The Young and the Restless spoilers document that Adam Newman (Mark Grossman) is definitely interested in Sally Spectra (Courtney Hope), as she suspected he would be. However, Jesse Gaines (Jamison Jones) is in play, which means that Rey Rosales and Adam will cross paths again.

It is never good for either man when whatever factor brings Rey and Adam together. Hardcore fans recall that Adam told Rey in the recent past that Sharon Rosales (Sharon Case) would eventually return to Grossman’s character.

Rey was not bothered by Adam’s statement because of the bravado. Sharon’s pattern of almost always defending her former husband is at the heart of Rey’s insecurity.

Billy Abbott (Jason Thompson) told Rey about Jesse. He specifically reached out to the Genoa City, Wisconsin detective because of the shared feelings Billy and Rey have about Adam.

Of course, Billy’s tortured history with Adam is legendary Y&R lore. The character that was then played by Michael Muhney (Adam) is believed to have accidentally struck and killed Delia Abbott (Sophie Pollono) on the outskirts of GC in late 2013.

That plot point has never been conclusively proven. But even Adam believes it is true.

As for Rey, he does have proof of Sharon’s feelings for Adam and remains uncertain who she loves more. If truth were told, Rey would likely choose Adam as Sharon’s top soul mate. She might as well.

Sally does not see Sharon as Rey sees Adam, but she may one day. At this point in the plot, Sally believes that Adam is very interested in entering a relationship.

After pitching the idea of Ally to Adam on more than one occasion, Sally has pulled back. She took to heart what Chloe Mitchell (Elizabeth Hendrickson) said about Connor Newman’s (Judah Mackey) feelings regarding his parents.

Even though Chadam is done, via Adam’s behest, Chelsea Lawson (Melissa Claire Egan) will soon be returning to town. But Sally does not see Chelsea as a threat either.

Adam will likely be with Sally before or by Christmas, at the latest. TPTB are right to pair these two rascals. They have a lot in common and can be good checks on each other.

Sharon’s fondness for Adam endures. Chelsea’s unresolved Chadam feelings project as part of the mix. But for now, Sally looks like the winner.