The Young and the Restless Spoilers: Ashland’s Tuscany Surprise – Begs Victoria to Run Away Together? 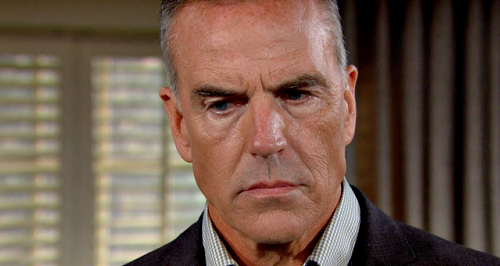 The Young and the Restless (Y&R) spoilers tease that Ashland Locke (Richard Burgi) may deliver a Tuscany surprise and beg Victoria Newman (Amelia Heinle) to run away together. Ashland might decide the walls are closing in fast and push Victoria to disappear with him forever. Will Ashland want to escape his past once and for all with Victoria by his side?

Ashland has built a relationship with Victoria on shaky ground since he’s kept so many secrets from her.

At the same time, Ashland does appear to genuinely care about Victoria. They’re definitely a lot alike when it comes to their personalities and shared ambitions.

Victoria truly seems like the type of woman Ashland would be attracted to – scheme or no scheme.

It doesn’t hurt that Victoria is so devoted to Ashland and so willing to excuse any issues that come up. Ashland gets a sense of loyalty and commitment from Victoria, so why wouldn’t he be head over heels?

It’s clear that Ashland is hiding horrible things that he’ll have to pay the price for eventually.

Ashland wants to put any old crimes and shady behavior to rest, but he can’t do that with Billy Abbott (Jason Thompson) and some of the Newmans breathing down his neck.

During the week of October 4-8, Y&R spoilers say Ashland and Victoria’s trip will take a shocking turn.

It seems likely Victoria and Ashland will show up early in Italy to check out all the wedding arrangements. Victoria wants everything to be perfect, but her groom certainly isn’t ideal and may prove it with a bombshell.

Will Ashland fear far worse trouble is brewing and urge Victoria to disappear with him? Jesse Gaines (Jamison Jones) pointed out that Ashland might use this Italy trip to escape.

Ashland could decide that’s a good idea, but he might also cling to the possibility of a future with Victoria and try to get her to vanish with him.

After all, Ashland is a billionaire and has made it his life’s goal to cover his tracks. He was doing a great job of it until Billy and the Newmans started poking their noses where they didn’t belong.

Ashland may push Victoria to believe he can take care of everything, including any further treatment – which may be bogus anyway.

Victoria might turn Ashland down when it comes to running away together, but he could at least make the pitch.

Before the marriage ceremony happens, Ashland may sell an “us vs. the world” mentality and try to get Victoria on board with fleeing together once their vows are said.

Regardless, Ashland and Victoria’s trip will bring a curveball ahead of this wedding.

The Young and the Restless spoilers say Ashland’s full history will ultimately blow up whether he likes it or not, so stay tuned!

CDL will have lots of other terrific Young and the Restless spoilers, news and updates for you, so make us your favorite hotspot.