The Young and the Restless Spoilers: Chelsea’s Ultimate Revenge – Separates Adam From Connor? 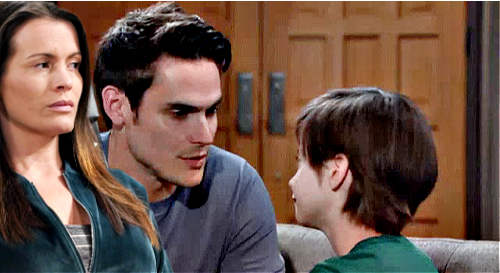 The Young and the Restless spoilers tease that Chelsea Lawson (Melissa Claire Egan) will have revenge on her mind in the coming days. As Y&R viewers know, Chelsea has been regaining her mobility, and while it’s a slow go, she’s definitely making progress.

Recently, Chelsea pulled herself up and out of her wheelchair, which was a major accomplishment. And on the episode to air on Monday, March 8, Chelsea will actually speak.

When Chloe Mitchell (Elizabeth Hendrickson) comes for a visit to see Chelsea, Chelsea will talk to a very surprised Chloe, and she’ll explain to her bestie exactly what she has planned for Adam Newman (Mark Grossman).

Viewers won’t be privy to what Chelsea tells Chloe, but it will be clear that Chelsea wants to make what she refers to as a “clean break” from Adam once and for all.

Well, we suspect that Chelsea will want more than just a clean break from Adam – she’s probably going to want to exact some serious revenge on Adam for his betrayal with Sharon Rosales (Sharon Case).

Chelsea was absolutely livid when she saw the photo of Adam and Sharon kissing, and she wants to get recovered as soon as she can and make Adam pay big time,

Perhaps Chelsea’s ultimate revenge on Adam will have to do with their son, Connor Newman (Judah Mackey). Right now, Connor’s away at boarding school, and maybe Chelsea will have a plan for Connor to be removed from school and meet her somewhere.

That would seem to be an impossible plan for Chelsea, except that she’s got Chloe on her side now.

It’s conceivable that Chloe might be able to help Chelsea plan an escape…with Connor. Chelsea could make her big reveal to Adam one day – imagine Chloe seeming helpless one minute and actually standing up and talking to Adam the next!

Chelsea could tell Adam that she’s fully recovered and that she’s whisked Connor off somewhere where she’ll meet him – and that Adam will only have occasional visitation with his son from now on.

That would certainly be the way to hurt Adam big time, as he’d lose both Chelsea and Connor in one fell swoop! And really, what would Adam be able to do about it, unless he wants to fight Chelsea for custody, which is something that he probably wouldn’t do.

We’ll see what happens here, but we’d say there’s a good chance that Chelsea will use Connor as a weapon to hit Adam where it hurts.

Do you think that Chelsea will find a way to separate Adam from his son? Stay tuned to the CBS soap and we’ll be sure to keep you up to speed on all the latest Young and the Restless spoilers and news. You can count on CDL!