The Young and the Restless Spoilers: Elena In Love & Pregnant With Different Men – Reunites With Nate, Devon Baby Bomb Drops? 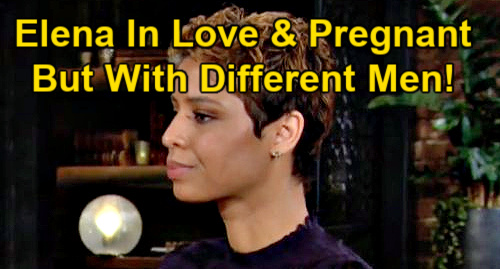 Elena’s always been hung up on Devon, so that’s kept her from truly opening her heart to Nate.

In many ways, Nate has always felt like a backup option – and now Nate’s taken himself out of the picture and eliminated himself as a runner-up in Elena’s heart. However, Elena will change her mind and decide she’s fallen for Nate after all.

This doesn’t really line up with what fans have seen on screen, but it’s the story Y&R’s going with now! Of course, this may be more of a plot point ahead of a twist that’s potentially brewing, but let’s set the stage first.

During the week of April 12-15, Nate will let Elena know he misses their friendship. He’ll hope they can be pals in addition to coworkers again, but Elena will reject that offer.

Elena will admit she doesn’t want to just be friends with Nate. She’ll reveal that she wants Nate back and that she’s truly over Devon.

Elena will feel like it’d be too hard to just stick to friendship, so she’ll really hope Nate’s willing to move forward with her as a couple. Part of Nate is sure to battle concerns and worry that Elena only wants him because Devon is no longer a possibility.

Another part of Nate may enjoy hearing Elena tell him what he’s always wanted to hear. The Young and the Restless spoilers say Nate will have a big decision to make.

Will Nate take Elena back and embrace this chance to be a couple without the ghost of Devon weighing them down?

There’s a good chance Nate will eventually get on board, so this could lead to a steamy reunion – maybe just in time for Elena to realize she’s pregnant by Devon! There have been some hints about Elena possibly having Devon’s bun in the oven.

For example, Elena talked to Lola Rosales (Sasha Calle) about how she previously imagined having a little boy or girl with Devon’s smile. Just imagine Elena’s predicament if she reunites with Nate and is finally content – only to realize she’s carrying Devon’s baby.

Elena and Devon’s last one-night stand could leave her with a permanent reminder of what they shared. This could bring quite a predicament for Elena, so stay tuned to see if a pregnancy shocker is indeed in her future.