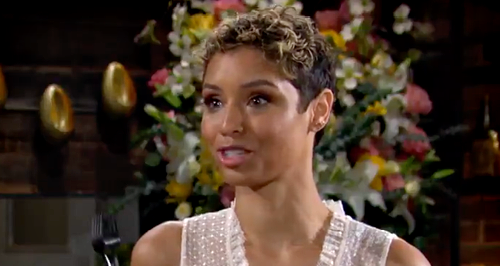 The Young and the Restless spoilers reveal that Imani Benedict (Leigh-Ann Rose) has no problem telling people what she wants. Right now, she wants Nate Hastings (Sean Dominic). Even though Nate is with Elena Dawson (Brytni Sarpy), Imani doesn’t view him as off-limits. In fact, she is pretty direct about her desires and does it right in front of Elena.

Y&R spoilers reveal that Elena hoped that Nate would give her another chance after her betrayal. He said no and explained that the trust was broken. However, he recently changed his mind when she told him about a job offer.

If she accepted the offer, it would mean moving away from Genoa City. Now they are back together but Nate is once again wondering if he made the right decision, but for a very different reason.

Imani has told everyone that she is very direct. Nobody ever has to guess what she is thinking because she makes it very clear. She has hinted at her attraction for Nate before. Imani seems to be stepping up her flirtation methods.

At Devon Hamilton’s (Bryton James) party, Imani learned that Nate and Elena are romantically involved. That didn’t push her away, though. In fact, it seemed to make the prize – Nate – even more delicious to Imani.

The Young and the Restless spoilers reveal that a love triangle is beginning to form. This time, it is Nate who is caught in the middle.

Even though Nate is with Elena, a preview for the week of July 12 teases Imani openly flirting with Nate. Imani showers him with compliments and he’s just sucking it all up.

Imani doesn’t back off when Elena arrives, either. In fact, the Genoa City newcomer boldly invites herself to join their lunch date. However, Elena doesn’t give Nate time to answer. She quickly makes it clear that Imani is not invited.

The Young And The Restless Spoilers: Difficult Decision

It is confirmed that during the week of July 12, Nate and Elena will “fend off” a third wheel. The wording suggests that Imani won’t give up interrupting the couple’s time together. In the preview, Nate seems to like the compliments, as well as the attention he’s getting from Imani.

However, Nate’s a smart man and knows exactly what she is doing. With that being said, Nate will have to make a decision. He clearly likes Imani and finds her intriguing.

Is Nate’s interest strong enough for him to consider walking away from his current squeeze?

How will Elena keep the other woman from snagging her man? Let us know who you think Nate should choose.

Does he belong with Elena or should he give romance with Imani a try?