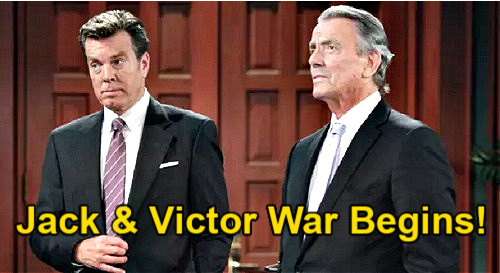 The Young and the Restless (Y&R) spoilers tease that Ashland Locke (Richard Burgi) will head to town with Tara Locke (Elizabeth Leiner) during the week of March 8-12.

That’ll naturally create some complications for Kyle Abbott (Michael Mealor), but we want to focus on the main reason for Ashland’s trip to Genoa City – and that’s to settle a bidding war!

Ashland will award his media company called Cyaxares to the highest bidder, but it looks like Jack Abbott’s (Peter Bergman) involvement could make a mess of things.

Billy Abbott (Jason Thompson) will need an investor to help ChancComm potentially acquire Cyaxares, so it seems he’ll turn to his brother for assistance.

The Young and the Restless spoilers say Jack will make a risky move in the week ahead. Soon after, Victor Newman (Eric Braeden) and Adam Newman (Mark Grossman) will get ready for a fierce battle.

Next, Y&R fans can expect the rivalry between the Newmans and Abbotts to reignite in a big way. It certainly sounds like Jack and Billy’s power play for Cyaxares will be the reason why.

Victor isn’t going to be happy about that – and neither will Victoria Newman (Amelia Heinle) since she’ll end up trying to beat all the other offers.

The Young and the Restless spoilers state that Victor will rely on Adam to help him as the new leader he has in mind for Cyaxares. No matter who comes out on top in this battle, the effects of the reignited rivalry could last for quite some time.

It’s safe to say this will turn Adam against Jack, who was previously a good friend of his. Even Victor and Jack have managed to find peace since Victor retired, but that peace will go right out the window!

As far as Victor’s concerned, Jack had better get ready to pay the price for daring to go up against the Newman empire again.

As other Y&R news emerges, we’ll bring you the latest updates. The Young and the Restless spoilers say some twists and turns are coming up once this Newman and Abbott war is back on.

It’ll be interesting to see how Victor retaliates and what Jack decides to do about it. CDL will have tons of other hot Young and the Restless spoilers, updates and news to check out, so stick with us for more details.