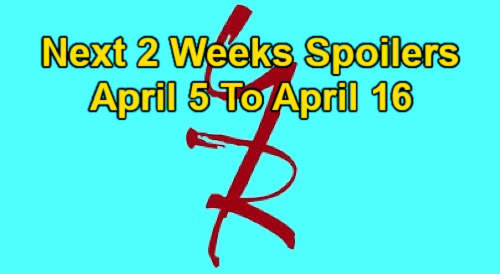 The Young and the Restless (Y&R) spoilers for the next two weeks, April 5 to April 16, tease that several Genoa City residents will be backed into corners. During the week of April 5-9, Ashland Locke (Richard Burgi) will make Kyle Abbott (Michael Mealor) squirm in a grilling session about his time in the Hamptons.

In the end, Ashland will flat-out ask if Kyle slept with Tara Locke (Elizabeth Leiner).

After Kyle tackles that tough question, he’ll seek out Jack Abbott (Peter Bergman) and voice his fears. Both Jack and Kyle will know a war is brewing.

The best thing they can do is nail down plans and try to ride the waves ahead. Ashland will definitely strike at Kyle, Jack, Summer Newman (Hunter King) and Jabot.

Meanwhile, Billy Abbott (Jason Thompson) will be part of a power play for Cyaxares – and that won’t go over well with Victor Newman (Eric Braeden). Victor will fight back, so Billy had better be prepared for a good dose of revenge!

As for Victoria Newman (Amelia Heinle), she’ll clash with Lily Winters (Christel Khalil). The Young and the Restless spoilers say Lily will want Victoria to face the harsh reality of a situation.

Perhaps Lily will point out that she’s the new woman in Billy’s life and that’s that! Lily won’t want Victoria thinking she can sink her hooks in Billy again – whether that’s through business, the kids or anything else.

Across town, Lauren Baldwin (Tracey E. Bregman) will grow suspicious thanks to all Phyllis Summers’ (Michelle Stafford) pestering. Lauren will realize something’s up with Summer and Sally Spectra (Courtney Hope), so she’ll summon Sally and demand some answers.

By the lake, Sharon Rosales (Sharon Case) will secretly meet with Adam Newman (Mark Grossman) and reel over his accusations. Adam will insist that Chelsea Lawson (Melissa Claire Egan) poisoned Rey Rosales (Jordi Vilasuso) and set him up to take the blame instead.

Sharon will have her doubts about Chelsea faking her paralysis, but it seems she’ll move forward with the trap Adam has in mind anyway. Chelsea will also get a visit from Nick Newman (Joshua Morrow), but it’ll ultimately take a wild turn.

Nick’s in for a huge shock at the penthouse, so it sounds like he’ll discover Chelsea isn’t as immobile as she claimed!

It’ll finally be time for Mariah Copeland’s (Camryn Grimes) blood test, so she’ll eventually return with the results and tell them whether the embryo transfer worked.

Mariah will reveal if she’s pregnant, so Abby and Devon will anxiously await Mariah’s updates.

As for Faith Newman (Alyvia Alyn Lind), she’ll find out the legal consequences of her drunken spin in the stolen Newman truck. Faith drove under the influence while underage and didn’t have a license, so she has to pay the price for all that.

Faith will learn that she could be facing court-ordered outpatient rehab. There’ll also be a fine and community service as part of Faith’s punishment, but she’ll be eager to accept that punishment and do what’s right.

We should note that Alyvia Alyn Lind’s final airdate will be on Wednesday, April 7. Y&R spoilers say Reylynn Caster will take over the role of Faith starting Monday, April 12. This Faith recast will jump right in the action and keep the story going strong.

It won’t be long until Faith and Moses Winters (Jacob Aaron Gaines) get to know each other a little better, so this should be a fast friendship that sets the stage for romance.

The week of April 12-16 will also bring Victor’s reaction to someone’s lies. Will Victor realize Chelsea’s only been pretending to be paralyzed – will Nick or Adam clue The Moustache in? It’s true that Chelsea really was paralyzed initially, but she’s been doing better for quite some time.

Victor arranged for Chelsea to have the best and brightest specialists, but this is the thanks he gets! Not to mention Chelsea framed Adam for trying to kill Rey with thallium. You can bet Victor will retaliate once he realizes the extent of Chelsea’s deception.

As for Amanda Sinclair (Mishael Morgan), she’ll move forward with the murder case and try to get some firm answers. Will Amanda play a role in uncovering who truly murdered her father, Richard Nealon?

That revelation may not come for a while, but Amanda will put the work in and face some difficult moments with her family as a result.

Over with Lauren, she’ll do something drastic to make sure Summer and Sally behave. The Young and the Restless spoilers say Lauren will force a meeting of the minds and lay down the law, so we’ll see how Sally and Summer respond!