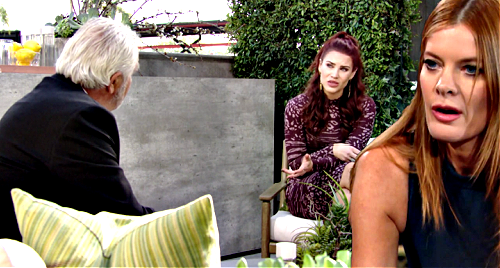 The Young and the Restless (Y&R) spoilers tease that Phyllis Summers (Michelle Stafford) is poised to bust Sally Spectra (Courtney Hope), so she may get Eric Forrester’s (John McCook) to confirm a sneaky Summer Newman (Hunter King) favor. Will Eric come through and make sure the Milan job manipulation is exposed?

Sally has a major loose end dangling that’s beyond her control. Y&R fans know Sally reached out to Eric in hopes of locking in a favor for Summer – at least that’s how she sold it during their chat!

In reality, Sally was doing herself a favor by getting Summer out of the way.

Sally acknowledged her own career advancement would be a perk, but she tried to act like she was genuinely trying to help Summer out.

Of course, Sally pushed Eric to keep her involvement under wraps and no doubt hopes that’d be the end of it.

However, there’s a good chance Eric will play a role in Sally’s upcoming downfall.

During the week of July 26-30, Phyllis will decide she has to get more aggressive in her approach with Sally. We’ll see more confrontations along with Phyllis’ willingness to play dirty.

Phyllis will be determined to get to the bottom of Sally’s actions and how they tie in with Summer’s abrupt Italy exit.

The Young and the Restless spoilers say Phyllis will uncover a clue and chase the truth. That could perhaps lead to a phone call or even a video chat with Eric soon enough.

Phyllis could be on the verge of confirming Sally was the one who made sure Summer got that Milan job out of the blue.

Maybe Phyllis could follow a hint and act like she simply wants to thank Eric as well as Sally.

Phyllis could convey her hunch and get Eric to confirm Sally asked him to put in a good word for Summer.

This is the kind of information that could wreck Sally’s romance with Jack Abbott (Peter Bergman) since she’s once again keeping a manipulative secret from him.

It would also prove that Sally kicked off all this drama and pulled Tara Locke (Elizabeth Leiner) into the alliance.

Tara may be running the show now, but it was Sally who started this mess.

The Young and the Restless spoilers say Phyllis will do whatever it takes to bring Sally and Tara down, so don’t miss how she does it! CDL’s your top source for thrilling soap spoilers, news and updates, so stop by again soon.