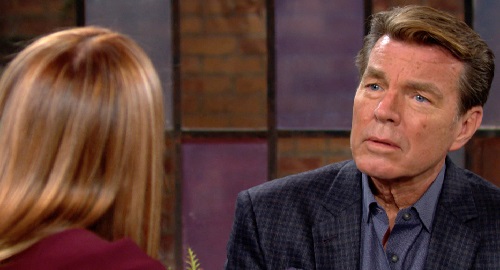 The Young and the Restless (Y&R) spoilers tease that Phyllis Summers (Michelle Stafford) and Jack Abbott (Peter Bergman) will have their first date as a reunited couple, but will Nick Newman (Joshua Morrow) derail their new beginning?

Jack is currently off on a mission to find Abby Newman-Abbott-Chancellor (Melissa Ordway), but he still found time to send Phyllis a special meal and have Friendsgiving with her over video chat. It touched Phyllis’ heart since Jack always knows exactly what to say and do.

Jack is one of the few people who truly “gets” Phyllis and can anticipate her needs before she even asks. Phyllis was already struggling with her lingering love for Jack, but that crazy dream took things a step further. It brought Phyllis’ true hurdle to the surface since she’s unsure of how to be a screwup and still be with the person she wants.

Of course, it’s not as hard as Phyllis is making it out to be. Jack seems to love her for her, so Phyllis should be fine if she continues to be herself and stay on a positive path. Most of Phyllis’ schemes lately have been done with good intentions, so that’s something Jack can live with.

Jack has made it crystal clear that he adores Phyllis and always will, so there’s nothing to stop a reunion if Phyllis wants one, too. After Jack’s latest grand gesture, Phyllis should be ready to move out of the friend zone and back into romantic territory.

That’ll require making a grand gesture of her own and will mean Phyllis has to put her heart on the line. However, there’s no one Phyllis is more comfortable with than Jack and that sweet smile of his. Phyllis just has to gather her courage and make something happen.

Once Jack returns from his trip, word will spread that Abby found Chance Chancellor (Conner Floyd) alive. Jack will be thrilled over the happy couple’s reunion, but Phyllis may suggest Genoa City could add one more reunion to the mix.

Regardless, it sounds like Phyllis will conquer her fears and share what’s truly in her heart. During the week of December 6-10, Phyllis and Jack will be on the same page about a new beginning.

Assuming that fresh start is a romantic one, Jack and Phyllis will need to go on their first date as a reunited couple. This could bring the prime opportunity for Nick to appear while it’s in progress.

It’s easy to imagine Nick having an awkward encounter with Phyllis and Jack after realizing they’re on a date. Nick could at least lock eyes with Phyllis in a tough moment, but this is all part of the process!

Sometimes it takes a little pain to get over one ex and back on track with another one, but plenty of fans are rooting for Jack and Phyllis to make it work this time. We’ll deliver updates as other Y&R news comes in.