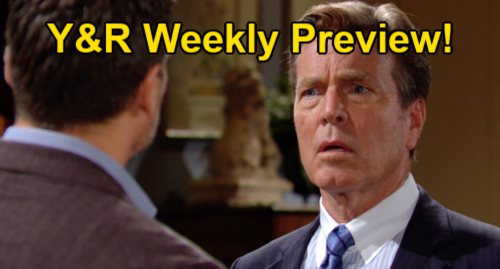 The Young and the Restless spoilers reveal the preview for September 20 to 24 shows Nick Newman (Joshua Morrow) exploding. Jack Abbott (Peter Bergman) will have to face the consequences of his love confession. Meanwhile, Phyllis Summers (Michelle Stafford) will be torn apart as she struggles to keep the peace.

Y&R spoilers reveal that Jack made a drunken confession to Phyllis that he was still in love with her. The admission took Phyllis by surprise but she tried to play it off as if it were just the alcohol talking.

In reality, Phyllis laid in bed all night with her eyes open, so it obviously had more of an effect on her than she admitted.

Meanwhile, Jack wishes he could take back the confession, but what’s done is done.

Jack is consumed with guilt and will have a nightmare during the week of September 20.

After the dream, Jack knows what he needs to do. Calling Nick and asking to meet, Jack says it’s important. It sounds as if Jack may confess to Nick what he told Phyllis.

In the weekly preview, Nick blasts Jack for “ruining everything.” Jack tries to explain himself by saying he never meant to interfere in Nick and Phyllis’ relationship.

However, that is not how Nick sees it. Whether this is a dream sequence or actually happens remains to be seen. In either case, Jack will struggle with how to fix the mess he’s caused.

The Young and the Restless spoilers reveal that Jack will have to face the consequences. Even if Nick’s rage is only in a dream, Jack will likely confess in real life.

How will Nick react to learning that Jack is still in love with Phyllis?

How will the love confession change the dynamics between the three characters? It’s hard to imagine that things will stay the same. However, there is another factor to consider.

The Young and the Restless Spoilers: Phyllis Summers Torn

In the preview, Nick and Jack’s heated confrontation is interrupted. Phyllis walks in and pleads with Nick to stop.

As both men look at Phyllis, the struggle in her heart is clear. Although she is in a relationship with Nick, Jack’s words had a big impact on her.

The look on Phyllis’ face is one of heartbreak and confusion.

Phyllis will have to make a decision and even if she stays with Nick, Jack’s confession could change that relationship forever.

What should Phyllis do about this complicated situation? Is Jack and Nick’s friendship over forever or is there a way for them to come back from this?

Are you #TeamPhick or #TeamPhack? 🤔 #YR is new this week on @CBS! Watch the latest episodes on @paramountplus. pic.twitter.com/Zdw7pNvm3v