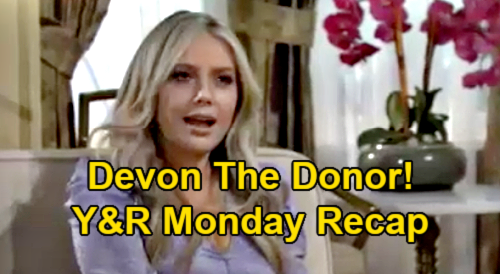 Summer and Faith will head out for a sister-to-sister talk, leaving Rey Rosales (Jordi Vilasuso) and Sharon alone at the house.

Talk between Sharon and Rey will soon turn to Adam Newman (Mark Grossman), and the typical bickering will begin, with Rey saying that there’s no future for them if Sharon allows Adam to be a part of her life. Rey will also point out that Sharon’s attachment to Adam hurts Faith, too.

Devon will talk to Abby about her ordeal with having a baby, and Devon will be able to see that Abby is stressed and overwhelmed in having to pick an anonymous sperm donor.

Summer will admit that she was a bully in high school, and she’ll support and listen to Faith, who will say that Jordan (Madison Thompson) was her only friend and that she drank so she wouldn’t lose that friendship.

Later, Summer and Faith will return to Sharon’s place, and Summer will tell Rey and Sharon that she believes Faith about not putting the vodka in her locker.

Summer will take off, and Faith will go to her room. Rey and Sharon will continue their arguing over Adam, and Rey will ultimately leave upset. Faith will come downstairs and ask Sharon what she did to Rey.

Before Sharon can explain, Faith will get a text saying, “Whoa, is it true your mom kissed your psycho uncle?” along with a photo of Sharon and Adam kissing. Faith will confront her mother with the photo and angrily ask what’s wrong with Sharon.

Mariah will notice that Kyle clearly has a problem with Sally, and after Sally goes, Kyle will spill the whole story about his affair with Tara Locke (Elizabeth Leiner) and about how Sally knows that he could have a son with Tara.

Mariah will hear all about the danger posed by Tara’s husband, Ashland Locke, and about how Tara emailed Kyle saying not to contact her again. Kyle will lament that he might have a son out there, and Mariah will warn him that Summer is going to realize that something is up with him sooner or later.

At the Chancellor mansion, Abby and Nina Webster (Tricia Cast) will decide on a sperm donor among many, but when Abby officially selects him from the database, it will turn out that he’s no longer available.

Soon, the doorbell will ring, and it will be Devon, followed shortly by Mariah. As it will turn out, Devon will have summoned Mariah to the mansion.

Devon will tell Abby that he had a moment of realization, and he’ll speak about how when people come together, it can make dreams come true.

Devon will reference what Mariah is doing for Abby and Chance Chancellor (Donny Boaz). “Do you have room for one more?” Devon will say, offering to be their sperm donor.

At the Grand Phoenix, Sally will talk with Phyllis Summers (Michelle Stafford), who will be chilly toward her daughter’s nemesis. Sally will guess that Phyllis doesn’t like her due to her relationship with Summer.

Jack Abbott (Peter Bergman) will walk up and talk with Sally about their recent celebration of her promotion. Phyllis will be unnerved.

Once Sally leaves, Phyllis will ask Jack what’s going on with Sally, and she’ll tell Jack that Sally clearly has an agenda. Jack will blast Phyllis and defend Sally, saying that they’ve all made mistakes and that Phyllis needs to stop treating Sally like an outsider and give her a chance.

Later, Phyllis will see Sally leaving the hotel, and she’ll call Sally over, saying, “I know what you’re up to.” Sally will just stare as Phyllis tells Sally that she “knows” her and that she wrote the book. Sally will leave.

Back at Jabot, Kyle will be brooding over Tara when Summer comes in and wonders what’s wrong with him. Summer will guess that Kyle’s thinking about Sally, and Kyle will say that’s it. Soon, Jack will walk in, and Summer will get a text from Phyllis saying that they need to talk.

Summer will head to the Grand Phoenix, where Phyllis will start in about how Sally is working Jack. Summer will say that it’s been going on since she started at Fenmore’s. Summer and Phyllis will decide to band together and protect Jack.

Monday’s episode will be fantastic, so stay tuned to the CBS soap! Don’t forget to check CDL often for the latest Young and the Restless spoilers, updates, and news. We’ve got you covered!